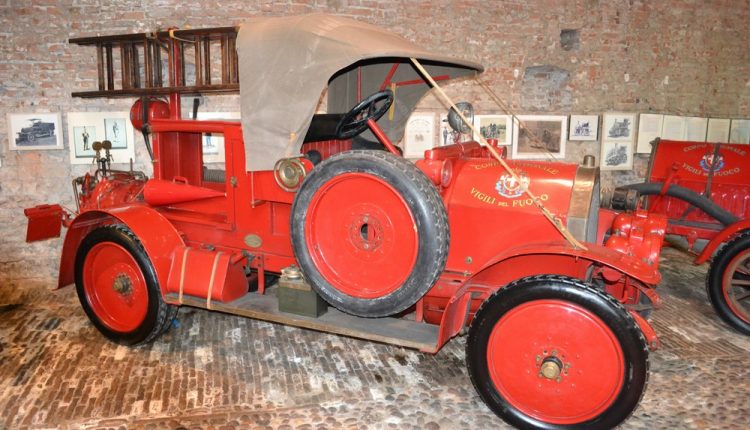 The National Firefighters Historical Gallery is located within the Renaissance structures of the Ducal Palace of Mantua, and is one of the most important collections of the past heritage of the Italian Firefighters history

Already starting from the Roman era, and then moving on to the studies on hydraulics conducted by Leonardo da Vinci and those continued later by the Enlightenment scientists, they prepared the ground for the great evolutions of the technologies dedicated to the fight against wild and domestic fires during the last century.

The passion and courage in the work carried out at the service of the community has always been the basis of the Firefighter activity, but starting from the beginning of the 1900s there was an unprecedented technological development that guaranteed the possibility of improving the techniques, the equipment and the vehicles available to Firefighters around the world.

Precisely for this reason it’s always a wonderful experience to visit the testimonies of the technical evolution of the vehicles, equipment, collections of images and films available at the Firefighters National Historical Gallery.

The great enthusiasm expressed by the visitors of the Gallery from the very first days of activity has rewarded the work and commitment of the Fire Brigade engaged in offering citizens the history, identity and traditions of the National Firefighters.

The main purpose of the Historical Gallery is linked to many other international realities, and is to invite the community to learn more about a structure so vital for the state and to create greater interest and commitment on the part of the citizens.

During the visit of the Historical Gallery, one feels part of a little-known world that has always been animated by the great courage and constant and ever-present action of the Italian Firefighters.

Inside the collection are exhibited in the two main galleries some of the Firefighter technology dating from the 19th century to the present day.

These vehicles and equipment are arranged in an orderly manner and accompanied by explanatory plates that document the evolution of the efficiency of the emergency response.

Starting from specially modified hand pumps and horse-drawn carriages, the focus then moves on to motorized vehicles equipped with ladders and steam pumps.

Following is the area dedicated to the post-war period in which various vehicles and machinery are exhibited to ensure rescue in the shortest possible time, for example a Fiat 502 F fire engine from 1923, an OM fire engine. Loc. From 1940, a Volkswagen Schwimmwagen amphibious vehicle from 1942 and a Fiat 1100 BLR ambulance also from 1942.

In addition is possible to see a beautiful 1956 Augusta Bell 47 G 3B-1 helicopter, famous for its maneuverability and speed of intervention, as well as numerous motorcycles, firefighter’s bicycles, uniforms, helmets, lamps and other equipment.

All these vehicles and relics have been recovered, preserved and found new life thanks to the Mantua Fire Brigade and to the fans of this world of great charm and great historical value.

Lumbago: what it is and how to treat it

Silent heart attack: what is silent myocardial infarction and what does it entail?