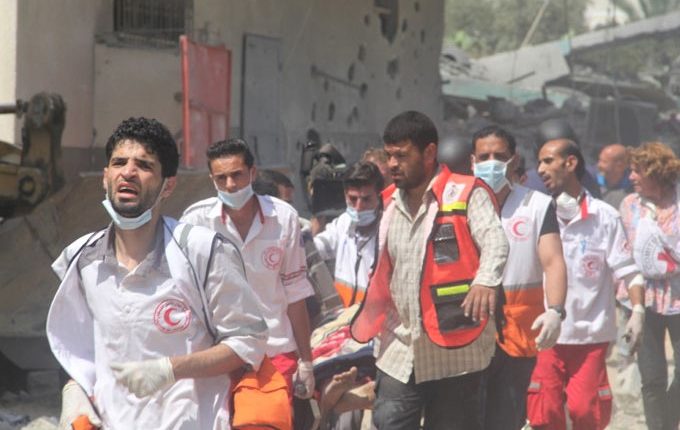 Ambulance, how is the rescue network organized in Palestine?

Ambulance in conflict zones: in Palestine, ambulances can experience time-consuming delays, by being held waiting by the Israeli military and civilian staff at the checkpoints even when the referring hospital and receiving hospital have obtained prior coordination from the Israeli Civil Administration to transfer a patient through a checkpoint.

Ambulance and checkpoint, the ‘back-to-back’ stretcher system adopted by the Palestinian Red Crescent

To avoid delay while negotiating for access at Jerusalem checkpoints, the Palestinian Red Crescent Society, the main emergency service provider into Jerusalem, uses “back-to-back” procedures for 93% of its transfers of patients from the West Bank to East Jerusalem.

This means that a West Bank-plated ambulance will transfer a patient by stretcher to a waiting Jerusalem-plated ambulance at the checkpoint, a process that takes place in the open, delays patient transfer by a minimum of 10 minutes and often longer due to security checks by checkpoint personnel.

Ambulance movements are coordinated with the Israeli authorities and Palestinian factions in order to make sure that Palestine Red Crescent workers are not caught in the hostilities. Tragically, in most instances, it takes hours before the ambulances can reach the wounded.

“Some wounded people simply die while waiting for an ambulance, ” said Antoine Grand, head of the ICRC office in Gaza. ” This is of course absolutely appalling. The ambulances must reach the injured as fast as possible. ”

The ambulance and the ongoing fighting: Palestine’s medical transport under the bombs

In some other cases, ambulances cannot reach the wounded at all because of the ongoing fighting and shelling.

In addition, many health workers cannot reach their workplaces in hospitals because of the ongoing fighting. This places additional strain on the available medical staff, who are already exhausted.

Most hospitals report that their emergency rooms and intensive care units are overwhelmed.

At least two hospitals are set to run out of fuel for their generators, which are now the only source of power available to run medical equipment.

The ICRC will try to arrange safe passage for fuel tankers from the United Nations Relief and Works Agency (UNWRA) to these hospitals.

“Hospitals, medical staff and ambulances must be respected at all times. Ambulances must have access to all areas in order to evacuate the wounded, ” said Pierre Wettach, the ICRC’s head of delegation for Israel and the occupied Palestinian territories.

COVID-19 Emergency In Palestine, The Situation In Hospitals In The Various Regions Of The Country

Covid-19 Emergency in Pakistan: the future lies with the vaccine