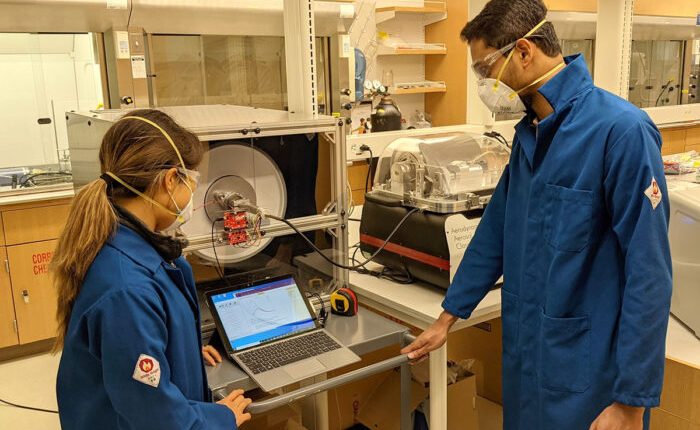 Covid-19 and reopening, Washington University researchers are designing detectors for SARS-CoV-2 in the air

Covid-19 detectors in the air, the solution for reopenings? All over the world, including Italy, the big issue at this stage is the reopening of public places and businesses. Researchers at Washington University are preparing a very useful tool in this area, namely droplet detectors with Covid-19 in the air

Of course, if they prove to be reliable and fast, this could really change things: sanitising an ambulance or a doctor’s surgery could only be done for one reason (the detection of Covid-19 in the air), and this would apply to many other areas of life.

Could a biosensor they developed years ago for Alzheimer’s disease be converted into an airborne detector of the virus that causes COVID-19?

The biosensor was designed to measure an Alzheimer’s protein in the brain, but there was no reason it couldn’t be repurposed to detect viral particles in the air instead, they thought. Cirrito and Yuede recruited aerosol expert Rajan Chakrabarty, PhD, an associate professor of energy, environmental and chemical engineering at the university’s McKelvey School of Engineering to help design a way to rapidly screen for airborne SARS-CoV-2, the virus that causes COVID-19.

One is an aerosol detector designed to continuously monitor air quality in large gathering places such as conference halls, airports and schools.

The other is a breathalyzer that could be used to rapidly gauge the health of people entering workplaces or other semi-public areas, much as thermal detectors for fever are already being used on the Washington University Medical Campus.

“Let’s say this aerosol detector goes off in a big crowd of people,” said Cirrito, the principal investigator of the collaboration.

“You could clear the room immediately so people aren’t spending significant amounts of time in a room with someone who is infected and possibly contagious, and mark that room for enhanced cleaning or disinfection.

That could reduce the likelihood of having a superspreading event. And the breathalyzer — you breathe into it, you get a reading in real time, if you’re clear you keep going and if you’re not you get referred for further testing.”

The biosensor was originally designed to detect changes in the levels of the Alzheimer’s protein amyloid beta.

To convert the amyloid biosensor into a coronavirus detector, the researchers swapped out the antibody that recognizes amyloid for a nanobody — an antibody from llamas — that recognizes a protein from the SARS-CoV-2 virus.

The nanobody was developed at the NIH in the laboratory of David Brody, MD, PhD, a former faculty member in the Department of Neurology at the School of Medicine.

Once the biosensor has been redesigned to detect SARS-CoV-2, it will need to be tested as an airborne sensor. But there’s a problem: Not much is known about how the virus-laden droplets — spread by coughing, sneezing or even breathing — travel through the air, so researchers won’t have a way to validate the sensor’s readings.

“There are a lot of unanswered questions,” Chakrabarty said. Chief among them: what are the roles of environmental conditions and pollution in transmission?

Fine particulate matter such as soot can travel incredibly long distances; particles from last year’s wildfires in California have made it as far as continental Europe. Could virus-laden droplets hitch a ride on a bit of soot and travel these vast distances?

And though there are models that suggest how humidity, temperature, pollution and the like affect the size and lifetime of droplets, they have not been validated experimentally — not to a degree to have confidence that a tiny sensor in a train car can accurately portray one’s risk of exposure.

Chakrabarty’s experiments will begin with answering questions about samples of aerosolized droplets of inactivated SARS-CoV-2, which will be provided by the NIH and Jacoo Boon, PhD, an associate professor of medicine.

Inside, a virus droplet ranging in size from a few tens of nanometers to a couple microns can be suspended, floating in chamber for up to several hours.

Researchers will be able to adjust certain variables (temperature, humidity and UV light exposure) in the chamber to better understand how these aerosolized particles with virus react to changing conditions, as well as how that impacts detection by the biosensor.

Ultimately, they’ll be able to inform how those variables affect a sensor’s ability to detect the particles.

Once they have a better understanding of how SARS-CoV-2-laden droplets are affected by these variables in a contrived, laboratory setting, in comes the air laden with fine particulate matter, also known as PM2.5.

The polluted air will be introduced in to the environmental rotating chamber with viral droplets for detailed investigation.

In this phase, Chakrabarty’s expertise is key: In his lab he can produce different PM2.5 pollutants — soot and organics like those from the California wildfires, or from a coal power plant.

“We want to know what happens when this fine particulate matter is found in the ambient air,” he said. “Can the Covid-19 survive on their surfaces and then be inhaled?”

These questions need to be addressed before rolling out a version of Cirrito’s biosensor, modified to detect SARS-CoV-2.

A better understanding of how these aerosol particles behave will help researchers determine if the sensor is picking up all that it should — whether on a clear, still day in a rural setting, or in a city plagued with air pollution.

If all goes well, the COVID-19 pandemic will end soon, but it is only a matter of time until the next dangerous airborne virus emerges.

The devices could be updated to monitor other threats by replacing the SARS-CoV-2 antibody with one specific to another virus, the researchers said, such as an epidemic strain of influenza or the next coronavirus.

“As long as people gather in groups, contagious respiratory infections are going to be an issue,” Cirrito said.

“I’ve never thought about what comes out of my mouth as much as I have in the past year.

Coughing in the grocery store will earn you weird looks for a long time.

But there are ways to mitigate the dangers, and I think devices like these could go a long way toward controlling the spread of viral diseases like COVID-19 and give people peace of mind when in large crowds.”

Paroxysmal positional vertigo (BPPV), what is it?