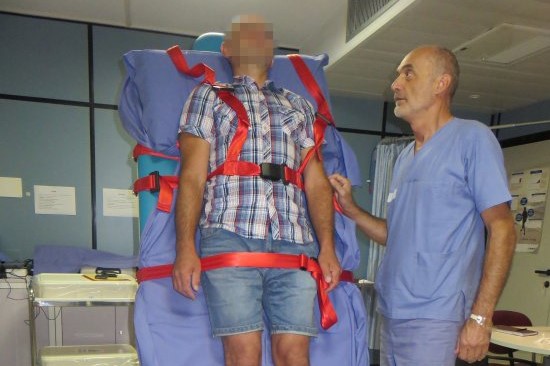 Head Up Tilt Test, how the test that investigates the causes of vagal syncope works

The Head Up Tilt Test is an examination that completes the diagnostic process to identify the causes of an episode of syncope, i.e. loss of consciousness due to a temporary drop in the flow of blood to the brain

During the test, the conditions of a syncopal episode are reproduced in a protected environment and under continuous monitoring of blood pressure and heart rate, thus making it possible to assess its origin.

The Head up Tilt Test investigates vagal syncope: what is this alarm bell of the body?

Why does one faint? And what tests determine the causes? Your head is spinning, your vision is blurred and your legs can’t cope.

You wake up a few seconds later on the floor, most often with someone slapping you back to the real world with a ‘benevolent’ slap.

This is the classic fainting spell, or, in medical terms, syncope.

Especially in summer – due to high temperatures and dehydration – there are frequent visits to the emergency room of patients affected by this event, which is not serious in itself, but which should not be trivialised because it could be an alarm bell of serious diseases, primarily cardiac.

Low-risk syncope is syncope caused by a sudden drop in blood pressure, accompanied, or not, by a slowing of the heart rate.

These are neuromediated syncopes, i.e. caused by a sudden change in the autonomic or vegetative nervous system.

Paradoxically, syncope is a protective factor for the brain. When the brain does not receive enough blood, it ‘flips the switch’ to protect itself.

With the fall, in fact, the subject rebalances the pressure and brings cerebral perfusion to optimal levels.

Neuromediated syncopes usually occur in young women who are hypotensive, in elderly people with very low blood pressure, partly because they drink little, or in growing adolescents.

Triggers may be strong emotions, anxiety, hot environments, severe pain or simple circumstances such as drawing blood or visiting a sick relative in hospital.

In these cases, the main risk is the consequences of the fall, sometimes serious.

It is estimated that in these patients, if not adequately followed up, syncopal episodes increase the incidence of sudden death by up to 24% within a year of syncope.

Most patients who come to this test already have a probable diagnosis of neuromediated syncope, as they have already undergone, usually in the emergency department, a cardiological examination, blood tests and an electrocardiogram that have ruled out major heart disease.

However, the doubt may remain that the fainting may have been caused, for example, by an electrical defect in the heart muscle.

In such cases, during the tilt test and at the same time as the syncope, there is a suspension of the heart rhythm, as evidenced by the electrocardiogram, which can last up to tens of seconds.

These are the most serious cases, which require targeted drug therapy or implantation of a pacemaker or defibrillator.

The aim of the Tilt Test is to reproduce, in a protected environment and under continuous monitoring of blood pressure and heart rate, a possible syncopal episode and to understand its causes.

The patient is placed on a couch and secured in slings. The couch is then raised vertically until it reaches 60°.

In this position, the body tends to react well and compensate for venous pulling which is concentrated in the lower limbs.

However, in most patients who have had syncopal episodes, these compensatory systems fail: the pressure suddenly drops and the heart rate also slows down, causing the typical neuromediated syncope.

Conversely, if after 20 minutes in the orthostatic position, no significant symptoms occur, a sublingual tablet of nitroglycerine is administered, which has the very rapid effect of lowering the pressure.

If, even with the drug, the patient remains conscious and does not report any particular symptoms, it is unlikely that further syncopal episodes will occur.

If the diagnostic doubt remains and other syncopes occur, a decision may be made to implant loop recorders (small subcutaneous recorders that monitor the heart’s behaviour for up to three years) to rule out major arrhythmias that the patient is not aware of.

Once neuromediated syncope has been diagnosed, therapy consists of simple advice on how to prevent or ‘abort’ syncope.

If, for example, the cause of fainting is a blood sample,’ the cardiologist specifies, ‘simply take the sample while lying down and wait a few minutes before getting up.

The most important thing is not to ignore the symptoms that precede syncope: if your head starts to spin and your eyesight becomes blurry, it is essential to lie down where you are in order to avoid falling. Finally, especially in summer, it is necessary to take plenty of fluids to keep blood pressure at the right level.

If the patient puts these small measures into practice, syncope usually remains a memory.

Canadian Syncope Risk Score – In Case Of Syncope, Patients Are Really In Danger Or Not?

Holiday In Italy And Safety, IRC: “More Defibrillators On Beaches And Shelters. We Need A Map To Geolocate The AED”

ST-Elevation Myocardial Infarction: What is a STEMI?