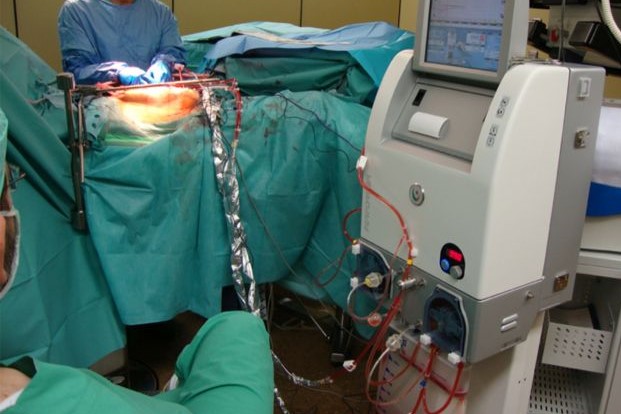 Intraperitoneal chemotherapy: with Intraperitoneal Chemo-Hyperthermia the anticancer drug is administered with heated saline solution directly into the abdominal cavity during the cancer operating session, exploiting the tumouricidal effect of the heat

Unlike conventional cancer treatment, the drug is not infused intravenously but administered with heated saline directly into the abdominal cavity during the cancer operating session.

This technique combines on the one hand the possibility of exploiting the effect of heat which, in addition to having tumour-killing properties in itself, promotes the entry of certain drugs into the cells and their anti-tumour effect.

On the other hand, it makes it possible to expose the tumour to much higher doses of chemotherapy than is possible with conventional infusion, while minimising side effects.

One cannula administers the chemotherapy, another the heated saline and the third carbon dioxide.

The process of administration and aspiration of the introduced liquid continues for about two hours and then the patient, except for comorbidities requiring admission to the intensive care unit, is brought back to the ward.

Intestinal neoplasms – such as colorectal cancer – and gynaecological neoplasms can have as a site of progression the peritoneum, the serous membrane that completely covers the abdominal cavity.

When this clinical condition occurs, it is referred to as peritoneal carcinosis, which, however, does not occur in all colorectal and gynaecological cancers.

Knowledge of the natural history of the disease has made it possible to identify patients who, at the time of diagnosis or treatment of the primary tumour, have specific risk factors for the development of carcinosis.

These are patients with primary T4a or T4b colorectal cancer and/or with surgically removable peritumoral carcinosis with the primary tumour as well as patients with ovarian metastases (Krukenberg tumour).

Precisely for this type of carcinoma, encouraging results have been reported in the literature in recent decades regarding the use of prophylactic surgery combined with HIPEC.

In particular, recent studies have shown that in patients with colorectal cancer at high risk of peritoneal carcinomatosis, this technique has been shown to improve long-term survival and reduce the rate of disease progression in the peritoneum.

The CHECK study is a randomised phase three trial with two arms.

In the first arm, the experimental one, patients undergo prophylactic surgery, with removal not only of the primary tumour but also of the omentum, appendix, round ligament of the liver and possibly ovaries in women representing sites at high risk of peritoneal carcinosis.

Surgery is combined with Intraperitoneal Chemo-Hyperthermia with Mitomycin, an anti-tumour antibiotic, which eliminates any residual tumour cells present in the abdominal cavity.

Of the three patients treated at Sacro Cuore in Negrar (Verona), two are in the experimental arm and one in the comparator arm.

The main objective of the study is to compare the efficacy of prophylactic surgery combined with HIPEC versus standard surgery in terms of local recurrence-free survival, disease-free survival and overall survival in patients with colorectal cancer at high risk of developing peritoneal carcinosis.

The secondary objective of the study is to compare the safety profile of the new method considering post-operative mortality and morbidity, duration of surgery and hospitalisation.