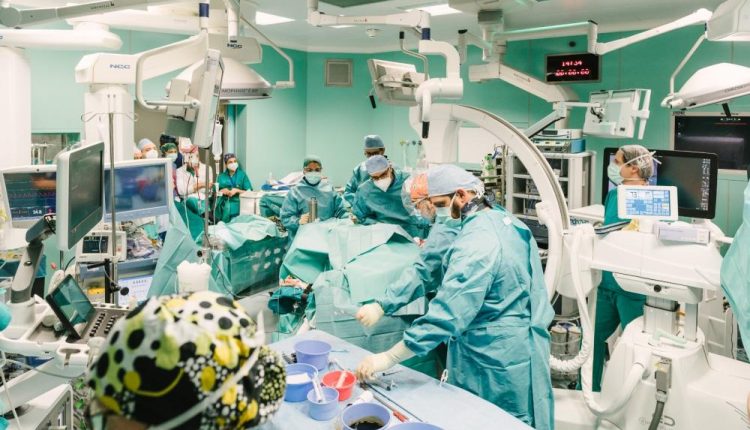 A kidney tumour, extending all the way to the heart, was removed using an innovative technique never before tried in the world

This is an unprecedented world first.

The operation was performed at Niguarda, where urologists and cardiac surgeons jointly operated on a frail 83-year-old patient using a specially designed minimally invasive technique, combining the use of a surgical robot and a special suction cannula inserted from the jugular vein to the heart.

The aim was to remove a renal tumour that had completely infiltrated the vena cava from the renal vein and then moved up to the right atrium of the heart, without resorting to “open surgery” due to the patient’s age and frail condition.

Given the patient’s advanced age and condition, who had recently had two cardiac stents implanted due to coronary artery disease, we opted for a minimally invasive procedure without abdominal incisions and without opening the sternum,” explained Aldo Bocciardi, Director of Urology.

To do this, we resorted to the use of the surgical robot, used to remove the kidney, the site of the tumour”.

The robot’s forceps, inserted through abdominal micro-incisions, were also used to remove the neoplastic infiltrate that reached the heart.

This was only possible after the cardiac surgeons had removed part of the cardiac infiltrate with the suction cannula and then pushed the remaining part into the abdomen where the urologists with the robot were able to hook it up and remove it completely.

In few other centres in the world has the robot been used for kidney tumours extending to the vena cava; in the few cases where the disease reached the heart, it has never been done with the robot and without opening the chest.

Kidney cancer: the location and extent of the infiltration required rapid intervention to put the patient out of danger

“This approach was made possible by the use of an innovative device,” explains Claudio Russo, Director of Cardiac Surgery.

In this way, the insertion of the suction cannula at the level of a vein in the neck, connected to a centrifugal pump and a filter, allowed high-flow suction of the tumour.

The blood sucked from inside the heart during surgery was filtered and reintroduced into the arterial circulation through another cannula placed at the level of the femoral artery.

The high-flow circulation allowed us to suck out part of the tumour infiltrate and create a vacuum that, like a suction cup, hooked the neoplastic thrombus and pushed it into the abdominal circulation where the robot was able to remove it”.

The urologists and cardiac surgeons at Niguarda studied and fine-tuned this operation together with the nurse anaesthetists and all the operating theatre staff.

One of the biggest difficulties was the extension of the infiltration through an anatomical bottleneck represented by the diaphragm,” says cardiac surgeon Giuseppe Bruschi, first operator for the cardio part of the procedure.

To overcome this, we had to devise this double approach from the abdomen with the robot and with the aspirator grafted to the neck so that the kidney and the neoplastic infiltrate could be removed entirely”.

With this manoeuvre, the organ was temporarily moved from its natural seat to allow the passage of the endoscopic surgical instruments for the removal of the thrombus”.

The technique represents an evolution of minimally invasive laparoscopic surgery.

The surgeon sits at the console and remotely controls the arms of the device, which are inserted through very small incisions.

The operator is able to follow the operation by following on a screen the images arriving from a miniaturised video camera which is inserted with the surgical instruments mounted on the arms of the robot.

The main fields of use of robotic surgery at Niguarda are urology, living kidney donation for transplantation purposes and other specific uses in general surgery.

Thyroid, the symptoms of a malfunctioning thyroid gland