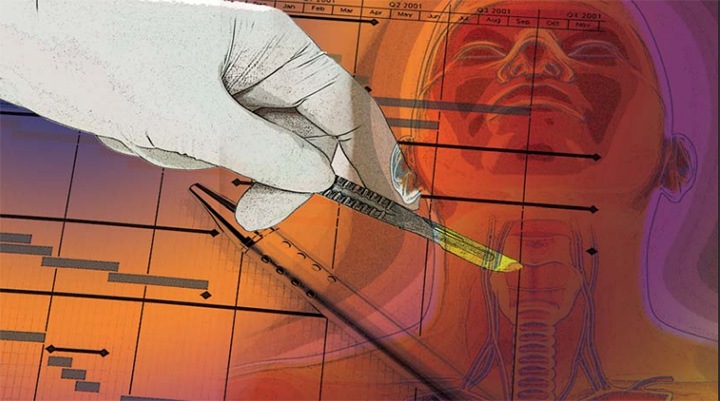 Surgical Management Of the Failed Airway: A guide to precutaneous cricothyrotomy

The first-known mention of an attempted surgical airway, a tracheostomy, was depicted on Egyptian tablets as early as 3600 BCE. History has condemned the emergent surgical airway when it has failed, but when successful, the physicians who performed it have risen in esteem to become “on a footing with the gods”.

Il 100 BCE, the Persian physician Asclepiades described in detail a tracheal incision for improving the airway. Yet most who advocated surgical approaches to the airway, including Asclepiades, were severely criticized.

Vicq d’Azyr, a French surgeon and anatomist, first described cricothyrotomy in 1805. Emergent cricothyroidotomy (also known as cricothyrotomy, minitracheostomy, and high tracheostomy) became widely acknowledged and accepted in 1976 when Brantigan and Grow confirmed the relative safety of the procedure.

A decade later, the Seldinger technique, a wire-over-needle procedure commonly used for intra-vascular cannulation, was adapted for use in obtaining both emergent and nonemergent surgical airways.

The 3 procedures that might be considered in an emergency airway setting include needle cricothyrotomy (with or without jet ventilation), surgical cricothyrotomy (traditional 4-step or percutaneous), and tracheostomy.

For anaesthetists and other nonsurgical specialists, learning needle or percutaneous cricothyrotomy may be more suitable than the more complicated surgical alternatives. The complication rate for emergent cricothyrotomy is substantial, ranging from 10% to 40% of cases.

Emergent cricothyrotomy is not a procedure that is easily practised for “real-life” situations. For the anesthesiologist, the decision to abandon traditional intubation and supraglottic ventilation methods for a surgical approach is emotionally difficult.

The difficulty is compounded when the physician faces an emergent situation with no time for adequate preparation and discussion.

The importance of training and psychological preparation

Psychological preparation throughout one’s career, therefore, is the single most important aspect of training for failed airway situations; not surprisingly, it is stressed repeatedly in numerous publications, including the Anesthesia Patient Safety Foundation’s guidance on the topic.

Exposure to the procedure through simulation may improve the chance of success, but given that not all providers have access to simulation centres, for most clinicians, the first opportunity to perform the procedure will be on a patient who cannot be intubated or ventilated.

Simulation may even improve the chance of success when the only instruments available are a pocketknife and ballpoint pen (although this is highly discouraged). Emergent cricothyrotomy remains a high-risk, low-frequency event that is ideally practised in simulation centres on mannequins and cadavers.

All physicians who deal with the airway should attempt to obtain proficiency in at least one surgically invasive method.

Coronary angioplasty, what to do post-operatively?