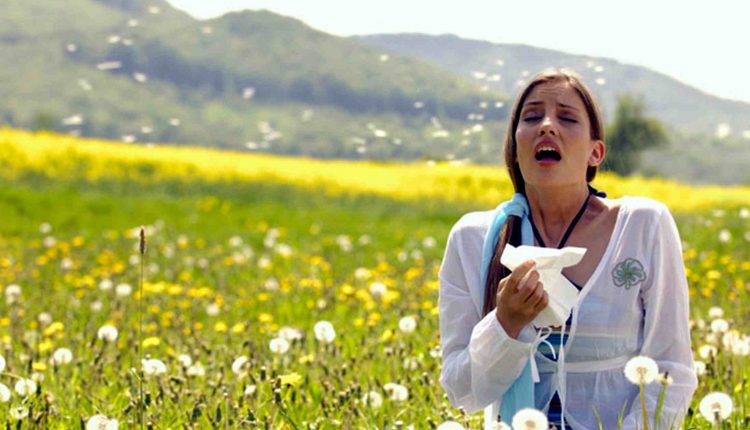 Symptoms and remedies of allergic rhinitis

Allergic rhinitis is an inflammation of the nasal mucous membranes caused by substances called allergens. Dust mites, animal hair, mould spores, pollen: these are the main causes of allergic rhinitis, a very common disorder that manifests itself with the more ‘typical’ symptoms of a cold

Some are present all year round, such as dust mites, while others are present mainly at certain times of the year, such as pollen.

In any case, exposure to these substances can have a negative impact on the sufferer’s life.

What is allergic rhinitis

In general, allergic rhinitis is an inflammation of the nasal mucous membranes.

It is caused by contact with harmless substances, called allergens, which the immune system of the allergic person recognises as foreign.

Exposure to these allergens results in the release of a high amount of histamine, a substance that has an irritating effect on the nasal mucosa and airways, causing swelling, excessive mucus production and the onset of allergic rhinitis.

But that’s not all. The allergic reaction also leads to an increase in immunoglobulin E – IgE (antibodies), which in turn can cause inflammation with symptoms in different organs and systems (lung, skin, eyes and nose).

Allergic rhinitis can be suffered all year round, because it is caused by exposure to household inhaled allergens, which can always be present.

In this case, we speak of permanent rhinitis.

The main ‘perennial’ allergens responsible for the disorder are:

In this case, the disorder is caused by plant allergens, pollen, which vary depending on the time of year.

Generally, the highest concentration of pollen in the air is in spring (mainly grasses, birch, cupressaceae and meadowsweet), but in summer and autumn there are also plants that flower and can cause ‘reactions’.

Allergic rhinitis manifests itself with symptoms similar to those of a common cold, namely:

While in most cases the complaints are mild, in others they can be more intense and persistent, such as difficulty breathing (dyspnoea) and tightness in the chest, causing sleep problems and interfering with daily life.

Finally, for those who already suffer from asthma, allergic rhinitis can lead to further worsening of asthma symptoms.

In general, it is important not to underestimate the problem, because if not treated properly, it can lead to the onset of other diseases.

In order to find out which allergen triggers rhinitis, it is first necessary to undergo a specialist allergy examination.

The specialist will mainly rely on the person’s medical history and, if necessary, indicate which diagnostic tests to perform:

The prick test is an easy-to-perform test that consists of applying a drop of the substance suspected of causing the allergy (allergen) to the inner surface of the forearm.

It is penetrated into the first layer of the skin by inserting a lancet (an instrument with a small sharp tip).

This is the time it takes for mediators to be released from the skin mast cells (the cells of the immune system involved in allergic reactions).

The skin is then examined to assess the reaction to the allergens, which is manifested by the appearance of pomphi, a swollen and reddened area of varying size.

A positive response is usually judged (and the person is therefore allergic) when the relative swelling is at least a quarter of the diameter of the reference pomphoid.

Remedies to keep allergens at bay

The most effective treatment is evaluated by the specialist, after establishing the type of allergen responsible for the rhinitis and assessing the severity of the symptoms.

In general, the first measure to limit the risk of the problem occurring is to limit exposure to the allergen as much as possible.

If allergic rhinitis is triggered by dust mites, it is necessary to clean up the home environment:

If the allergy is to animal hair, it would be advisable to

To reduce the risk of contact with mould spores you should

Finally, if you are allergic to pollen, you should:

The most effective treatment would require complete removal from the allergic source, which is clearly not always possible.

However, following these measures can help keep the problem under control and limit discomfort.

In order to alleviate symptoms in the acute phase of allergic rhinitis, the specialist may consider prescribing topical, i.e. local, medication.

These are usually nasal sprays containing corticosteroids, which have an anti-inflammatory effect and reduce swelling of the nasal mucous membranes.

A class of drugs also used are antihistamines, which reduce the release of histamine into the bloodstream and alleviate most symptoms, particularly itching, sneezing or watery eyes, but unfortunately have no anti-inflammatory power and therefore are not curative in contrast to topical therapy.

The typical side effect of the old generation of oral antihistamines, namely drowsiness, is nowadays very limited.

If topical therapy or therapy with antihistamines does not produce the desired results, specific immunotherapy, the so-called vaccine, may be an alternative to treat more severe cases and to provide longer-lasting protection against allergic reactions.

It is particularly useful for those suffering from respiratory allergies (pollen, mites, moulds) and hymenoptera allergies (bee, wasp, hornet).

Immunotherapy can be administered in 2 ways:

For both types of administration, the duration of the treatment cycle varies from 3 to 5 years, depending on the allergen involved.

This therapy,’ concludes the specialist, ‘rarely causes side effects and these are minor local reactions such as:

Drug Allergies: What Are The Symptoms And How Are They Diagnosed?

Respiratory Or Food Allergies: What Is The Prick Test And What Is It For?

HEMS, learn about the features of the Airbus H145 and discover what makes it unique for helicopter rescue