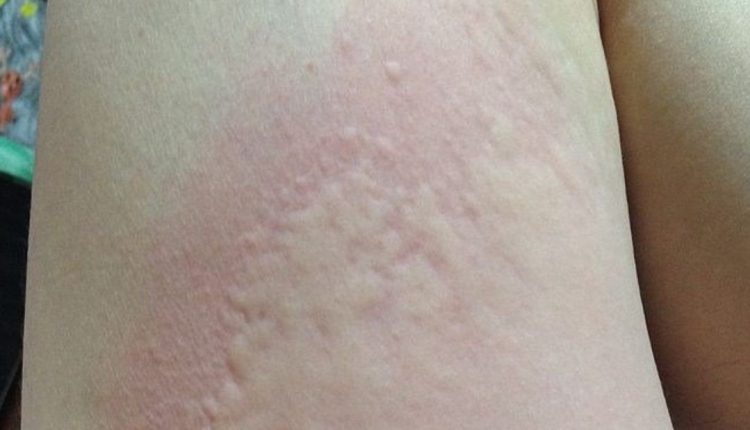 When we talk about hives (urticaria), we are actually talking about a group of diseases, all of which present with the same signs and symptoms, but which can have very different causes, allergic but not only

Although it is very common, sufferers often do not know who to refer to, and this uncertainty leads to additional stress in a diagnosis and treatment process that can already be long and tiring.

Swelling and itching: the signs and symptoms of urticaria

It presents itself with the typical pomphi: itchy, pinkish or white patches of skin, often surrounded by an erythematous halo, which can appear at any site on the body surface and vary in size, shape and number.

Its distinguishing feature is that the duration of each individual pumple is by definition less than 24 hours, although urticaria as a whole can have a much longer course, during which several pumices ‘come and go’ at different times.

The other manifestation of urticaria is angio-oedema, which may be accompanied by the classic pomphi or occur alone, and consists of swellings with blurred borders on the subcutaneous or submucosal tissue, of normal colour. Typical locations are the lips, eyelids, and, among the most feared, the larynx.

Angio-oedema is usually associated with pain rather than actual itching, and resolves within 2-3 days.

Urticaria is a condition that profoundly interferes with the quality of life of sufferers.

The clinical manifestations of most forms of urticaria are caused by the release of histamine by certain white blood cells residing in the dermis: mast cells.

Urticaria can be induced by physical stimuli such as heat (but also, conversely, cold), exposure to ultraviolet radiation, pressure on the skin (e.g. from belts or clothing), exercise, or rubbing against the skin.

Some medications can also cause it.

Contrary to popular belief if it starts in adults, it is rarely caused by a food allergy.

In chronic spontaneous urticaria, one of the most common forms of urticaria in adults, no factors can be identified that can induce the appearance of pomphi: it is often caused by an autoimmune process and in fact can occur in people with thyroiditis or other autoimmune diseases, often women between 40 and 50 years of age.

How is urticaria treated?

Treatment depends largely on the correct identification of the triggering factors, through the systematic and thorough collection of information from the patient during the examination, and possible laboratory tests.

Similarly, it is important to distinguish real urticaria from urticarial eruptions, for which the treatments are different: pemphigoid, vasculitis and autoinflammatory diseases, among others.

Non-sedating antihistamines are the cornerstone of urticaria therapy

Avoidance of triggers, if these can be demonstrated, should never be underestimated for inducible forms of urticaria.

Omalizumab, an IgE-neutralising monoclonal antibody, is licensed for the treatment of chronic spontaneous urticaria that is insufficiently controlled with antihistamines alone.

Respiratory Or Food Allergies: What Is The Prick Test And What Is It For?

Non-Hodgkin's lymphoma: symptoms, diagnosis and treatment of a heterogeneous group of…

Anniversary of the First International Conference in Geneva: Rocca: "we…

In St. Peter's Square a mobile clinic for prevention dedicated to the most needy

Emergency and rescue radio transmissions: ADVANTEC introduces us to Hytera's…

Emergency Expo welcomes the Spencer contest "The Force of Will": vote for the…