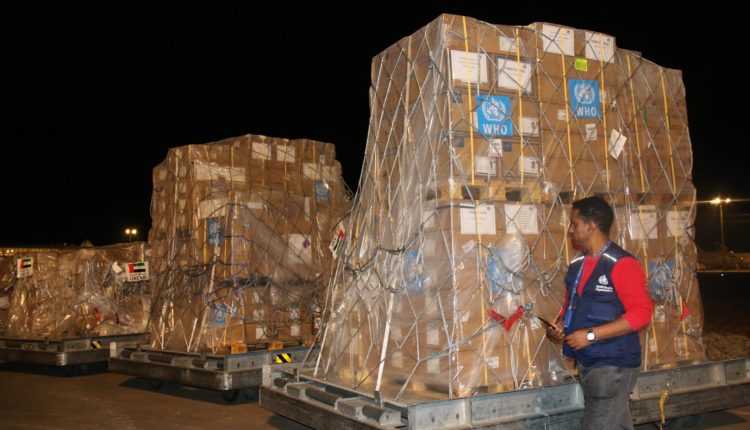 West and Central Africa are growing concern for COVID-19: Cameroon has confirmed more than 800 cases, while Niger, Cote d’Ivoire and Guinea have reported a rapid rise in numbers during the past week. WHO, WFP and AU are delivering critical supplies to help communities.

Brazzaville, 16 April 2020 – Just over two months since COVID-19 was first detected in Africa, the disease has now spread to nearly every country, resulting in nearly 17 000 confirmed cases and around 900 deaths across the continent. While South Africa has sub-Saharan Africa’s most severe outbreak, West and Central Africa are of growing concern: Cameroon has confirmed more than 800 cases, while Niger, Cote d’Ivoire and Guinea have reported a rapid rise in numbers during the past week.

“Eleven out of 17 countries with more than 100 cases of COVID-19 are in West and Central Africa,” said Dr Matshidiso Moeti, the World Health Organization (WHO) Regional Director for Africa. “We are working with the governments to better understand what is happening on the ground, but this is worrisome as countries in these subregions often have particularly fragile health systems.”

Crucial medical equipment needed to respond to COVID-19 is lacking in many countries. WHO has been working closely with the World Food Programme (WFP), the African Union (AU), national governments and the Jack Ma Foundation to make sure that vital supplies get to the people who need it most: front line health workers in Africa. In the past two days, eight countries have received medical equipment.

“For countries to ramp up testing, tracing and treatment capacity, they need supplies and solidarity. There is enough personal protective equipment in this shipment to allow health workers from across Africa to treat 30 000 patients without putting themselves at risk. This equipment will keep them safe and let them focus on saving lives,” said Dr Moeti. “These cargo flights demonstrate the power of international co-operation and collective action.”

With several borders closed and flights cancelled, ensuring countries receive deliveries of much-needed medical equipment has become increasingly difficult. WHO has called for humanitarian corridors and this week’s ‘Solidarity Flights’ are delivering essential supplies to every country in Africa. The medical cargo contains face shields, gloves, goggles, gowns, masks, medical aprons and thermometers, as well as more than 400 ventilators.

A lack of personal protective equipment is already hampering response in many countries in Africa, making deliveries such as these – and the spirit of generosity and solidarity that underpin them – more essential than ever. Healthcare workers are often disproportionately affected by infectious disease outbreaks and there is some evidence that COVID-19 is threatening health workers in Africa. In Niger, for example, 32 health workers have already tested positive for COVID-19, making up 7.2% of total cases.

Kenya expanded its testing capacity and has now more than 200 confirmed COVID-19 cases. It is one of the countries which received these critical supplies in the past few days. Improved surveillance has shown that cases are increasingly cropping up outside of Nairobi and the country is moving to decentralize its response.

“It is coming at the right time because we would like to get the health workers up and running and continue with the good work that they are doing in the management of the quarantine sites and isolation facilities that have been set up across the country,” said Dr Simon Kibias, Director of Standards at the Kenyan Ministry of Health.

Press Release of the World Health Organization Office for Africa

Pandemic crisis in Africa, up to 300,000 Africans risk to die because of COVID19

COVID-19, "Clap for carers": applauders to health workers every evening in the UK