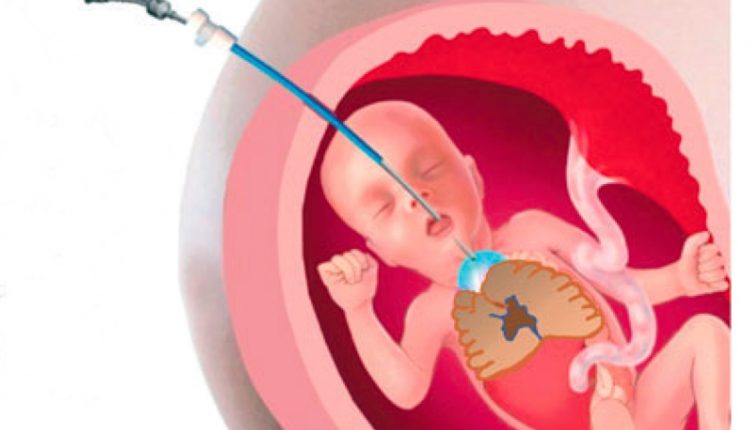 Fetal surgery, surgery on laryngeal atresia at Gaslini: the second in the world

Life-saving surgery performed at the IRCCS Istituto Giannina Gaslini of Genoa on a newborn: during pregnancy a malformation incompatible with life, laryngeal atresia, was diagnosed

But by combining the skills of the Genoese pediatric polyclinic it was possible to coordinate all the professional skills necessary to carry out two successive interventions that guaranteed the survival of the baby.

“The case was exceptional for various reasons: the first is the extremely courageous decision of the parents to carry the pregnancy to term despite a malformation that is theoretically incompatible with life, unless a very delicate operation in the fetal period is carried out. only occasionally and experimentally in very few cases before this, and never performed at Gaslini.

We are proud to have offered an alternative life and a path of growth to this family, thanks to the synergistic and close-knit work of doctors, midwives and nurses of 5 complex operating units : a perfect organization of the many and different medical, technical and nursing services that are the wealth of this pediatric hospital ”explains Renato Botti, General Manager of Gaslini .

“Laryngeal atresia , which consists in the presence of a membrane at the level of the vocal cords to prevent the flow of air into the trachea”

This is a very serious malformation of the upper airways that leads to neonatal death in almost all cases. To date, only a dozen survivors are described worldwide, ”explains Dr. Michele Torre , head of the UOSD Team for Airway and Thoracic Surgery.

“This malformation, which Ms. FS was diagnosed with at 22 weeks of gestation, determines risk conditions that often lead to intrauterine death due to heart failure that accompanies the dilation of the lungs due to the presence of the laryngeal membrane.

After the initial consultation on the malformation, the couple decided they want to carry on with the pregnancy, agreeing to move from Naples to Genoa to give their child a real chance of survival “says prof. Dario Paladini director of the UOC of Fetal and Perinatal Medicine and of the UOC Gynecology and Obstetrics.

The couple was presented with the prospect of fetal surgery to restore patency of the airways and thus reduce lung expansion and heart failure risk, allowing for fetal development and birth closer to term of pregnancy .

In the absence of an operation of this type, fetal mortality from heart failure is very high

Therefore, the multidisciplinary team (Fetal Surgeon, Neonatologists-Resuscitators, Airway Surgeons and Otolaryngologists) of Gaslini proposed to the couple the execution of an experimental approach of fetal surgery to reduce the risk of fetal mortality.

“This fetal surgery has been performed only once in the world before the one performed at Gaslini , and a second similar surgery was published immediately after the procedure performed at the Genoese pediatric hospital – explains  prof. Dario Paladini director of the UOC of Fetal and Perinatal Medicine- .

The intervention was illustrated and proposed to the couple in a multidisciplinary counseling session.

The fetal surgery consists in a fetoscopic access to the airway and in the laser perforation – and subsequent dilation with miniaturized forceps – of the atretic (obstructed) larynx, which allows toreduce the pressure in the lungs and the risk of mortality in utero from heart failure “.

“The fetal surgery was performed at 29 weeks of gestation and was effective in re-establishing a first minimal transit, albeit of a small caliber, in the airways, thus allowing the pregnancy to continue.

However, the minimal opening of the airways obtained with fetal intervention is not sufficient to allow the infant to breathe autonomously at the time of birth.

In these cases, even in the case of spontaneous onset of labor, delivery can only be carried out through a very sophisticated caesarean section called EXIT (Ex-Utero Intrapartum Treatment). With this technique, the fetus is partially extracted from the maternal uterus and kept connected to the placenta, which allows for oxygenation.

This allows Neonatologists-Resuscitators and Surgeons to obtain effective access to the airways, without the child suffering from hypoxic suffering.

Once intubated or, as in this case, after carrying out a tracheotomy, the baby is extracted completely, as the breathing can be easily assisted through the tracheal tube or the tracheostomy tube “explains Dr. Andrea Moscatelli, director of the UOC Therapy Intensive Neonatal and Pediatric .

The caesarean section in EXIT , a procedure with a high risk of maternal haemorrhage, was performed in the Cardiac Surgery operating room adjacent to the Neonatal and Pediatric Intensive Care Unit, according to an approach defined  DRICU (Delivery Room Intensive Care Unit) which provides for the transfer to the delivery room / surgery with all the technology needed to create a neonatal intensive care station. Dr. Gabriele De Tonetti performed maternal-fetal anesthesia, guaranteeing the difficult hemodynamic stability of the mother.

The caesarean section was performed by Prof. Paladini with Dr. L. Pedretti, of the UOC of Fetal and Perinatal Medicine / Obstetrics.

After extracting the fetus, while the oxygen supply was still guaranteed by the umbilical cord, the fetus was placed on the womb and a first attempt of fiber-assisted intubation was carried out by Dr. E. Lampugnani, of the Neonatal Intensive Care Unit and Pediatric. Intubation was impossible due to the very small caliber of laryngeal patency obtained with the previous fetal surgery.

Subsequently, Dr. Roberto D’Agostino and Dr. Michele Torre successfully performed a trachetomy , placing an endotracheal cannula – a very difficult operation for the operating conditions (newborn placed on the womb, still connected to the placental circulation) and the weight limited of the premature infant.

This allowed the newborn’s ventilation and autonomy from the placental circulation.

The assistance and support procedures were completed for the child who was then transferred to stable clinical conditions in the Intensive Care Unit. The newborn weighed 1.7 kg at birth.

“This type of surgery is exceptional for a number of reasons: it is the first time that we have performed a tracheostomy in fetal-placental circulation; the type of patient (premature and of low weight), the need to act in a very short time, the difficulty caused by the absence of ventilation, the impossibility of preventive intubation, together with the difficult recognition of tissues in such a small patient, make the surgery is a real challenge ”explains Dr. Roberto D’Agostino, director of the Otolaryngology UOC.

Despite the prematurity, the subsequent course was extremely favorable from the respiratory point of view, even if the little one developed an intestinal complication typical of premature babies, which required abdominal surgery with subsequent ileostomy.

Laryngeal atresia but…furthermore, in the following weeks of hospitalization, other problems were diagnosed and are still being treated

“ Antonio is currently 40 weeks of correct age, weighs 3 kg, is very responsive and lively . He is still connected to the ventilator via the tracheostomy and is dependent on parenteral nutrition.

“The child is fine and growing but when he grows up he will have to face a difficult operation to be able to breathe on his own without the tracheotomy. Atresia of the larynx is a malformation incompatible with life but can only be successfully treated in centers that can ensure prenatal treatment, delivery and post-natal care of the highest level.

The course will then be completed with the reconstruction of the larynx and trachea, for which our Institute is an Italian and European excellence “explains Dr. Michele Torre Gaslini Center for Pediatric Thoracic and Airway Surgery.

This organizational effort is articulated and complex and requires a high-profile functional integration between all the professional figures involved.

Just think that in the operating room – where 4-6 people are present for a routine caesarean section, including doctors and midwives / nurses – there were 18 members of the hospital staff, activated in emergency “comments Dr. Raffaele Spiazzi, health director of the Gaslini.

“This case is certainly exceptional and demonstrates how results of this type can only be obtained in hyper-specialized centers of reference, in which a continuum of care from fetal to post-natal life is possible .

The Giannina Gaslini Institute is one of the few structures in Europe where, in the context of a pediatric polyclinic equipped with all medical and surgical specialties, there is also a birth point.

This allows us to guarantee the newborn all the highly specialized procedures including fetal and neonatal surgery, intensive care, up to the extra-body life support techniques, such as neonatal ECMO, necessary to deal with such complex cases ” concludes Raffaele Spiazzi.

Rare Diseases: Positive Results Of A Phase 3 Study For The Treatment Of Idiopathic Hypersomnia

Rare Diseases, Neonatal Screening: What It Is, Which Diseases It Covers And What Happens If It Is Positive

War in Ukraine, since 24 February the Red Cross has already trained more than 45,600 people in first aid

Panic attack: what it is and what the symptoms are