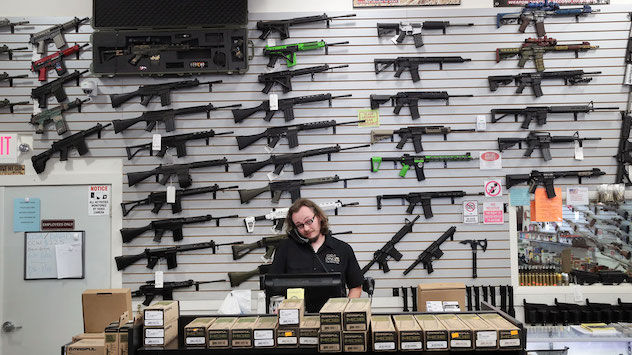 The spread of SARS-COV-2 does not spare the US. Americans seem to be so afraid of coronavirus that many malls have been assaulted. Not for food, but for guns!

Thousands of infected people are registered in many states of the US. Trump intimates his citizens to stay home and many schools closed in the previous days. Allegedly 30,000 children will be at home because of schools closures in the next few days. SARS-COV-2 makes people worried, now. However, many Americans who are afraid of coronavirus do not go shopping for toilet paper or food necessity. They buy guns. But why?

Afraid of coronavirus: why such a race for guns?

It seems that many Americans are afraid of other people’s reaction to shops and activities closures all over the country. Like in a movie of “zombies awakening”, Americans fear a breakdown of public order, with looting and robberies and everything shutting down.

It can remind a sort of “purge”. People have to feel safe and they really believe that having a handgun could make the difference, allowing them to “protect” their house and their family from any kind of eventual crime caused by SARSCOV2.

Gun shops saw an increase of around 30% to 40% since February in many regions like California, New York, Washington State, Alabama and Ohio. Some American citizen seems to think that it’s right preparing for something they do not know, even if it might cost someone’s life. They have a lack of confidence that if something big and bad happens, the emergency medical response would have a breakdown and it will not work.

Many just remind the 2005 hurricane on the Gulf Coast, when the disaster put everyone in danger and emergency responders harder came to rescue. They are scared of anarchy that may come.

EMS in the US: are medical practitioners and firefighters going to save more gunshot wounded people than coronavirus patients?

Paramedics, firefighters and EMTs in the US have a high preparation and they know well how to face gunshot wounds. But it is still something that we are not supposed to know since no statistic has been reported this far. Still, it is not difficult that Police must be absolutely careful because in the next days some violence episode can occur and more than stopping the violence outbreak, they will be to beware of SARS-COV-2.

However, the SARS-COV-2 spread in the US seem to be only at the beginning and the main concern of first responders is the number of supplies to face the emergency.  Emergency medical practitioners are scrambling to keep up, with key direction on how to protect themselves lagging behind the unprecedented threat.

It took nearly four weeks from the time the World Health Organization announced China’s novel coronavirus outbreak for the U.S. CDC (Centers for Disease Control and Prevention) to issue guidance for first responders. And what’s next? According to A New York Times statistic, first responders are the workers at the highest risk. But, even if people are afraid of coronavirus, first responders, unfortunately, cannot.

SARS-COV-2 IN THE REST OF THE WORLD:

Coronavirus in France, a very concerning scenario. But citizens are not worried about COVID-19