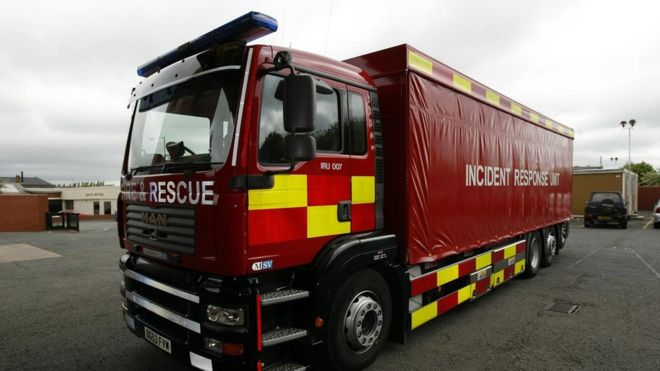 A third of emergency vehicles equipped to deal with major contaminations in England, including “dirty bombs”, are to be withdrawn on 31 December, according to a leaked document.

Some 22 incident response units (IRUs) are to be withdrawn following a review that found 43 would be sufficient.

Labour said the move risked security and called for it to be put on hold. The government said it was better to give front-line responders training to deal with contaminations.

IRUs provide decontamination facilities at incidents where a large number of people may have been exposed to chemical, biological, radiological or nuclear materials, such as in potential terror attacks.

The leaked document, a national resilience information note issued by the Chief Fire Officers Association, said the reduction was the result of a review conducted with the Department for Communities and Local Government.

It found 43 IRUs were sufficient “in order to meet the scale of event identified within the national resilience planning assumptions”.

Showers, protective clothing and detectors are among the equipment on board the IRU trucks, which are ready to be used at all times by specially-trained firefighters from local brigades.

Shadow home secretary Andy Burnham said the withdrawal was being done without consultation and called for the decision to be put on hold until ministers explained the implications.

Where IRUs are being withdrawn

Mr Burnham said: “It cannot possibly be the right time to cut, by a third, our ability to respond to serious terrorist incidents.

“Not only is it the wrong time, but it is even worse that these plans are being hatched in secret, without any public information or consultation.

“Ministers must put these plans on hold immediately and make a statement to Parliament as soon as it returns.

“It is disgraceful that we’re days away from this happening without any debate.”

The 22 IRUs deemed surplus to requirements need to be taken out of service “almost immediately”, the document explained, because their power respirator protective suits are about to pass their expiry dates. A set of the one-piece gas-tight chemical protection suits will be supplied for the remaining appliances.

The Chief Fire Officers Association said it was in discussions with the DCLG to identify a disposal strategy.

Central government funding for affected areas will cease from April.

A government spokesman said: “Public safety is our number one priority.

“Research and experience shows that speed is of the essence in dealing with major incidents which is why it is better to issue all front line responders with the training to begin decontamination rather than wait for specialist services to arrive.”