There are many types of search and rescue (SAR) aircraft worldwide and each of them responds to specific requirements of that country. Given their differences in terms of design and flying performance, it would be good to analyze and also identify their characteristics. A paper issued by professionals in EMS and Aviation organizations in Malaysia.

The knowledge of the main characteristics of search and rescue (SAR) aircraft will definitely serve as reference guideline in the design of future means. Or, at least, it will serve in the selection of suitable available aircraft in the market for use in the search and rescue missions. Based on this notion, the Hospital Administrator for the Malaysian Ministry of Health and other professionals in the aviation and relief fields issued an analysis conducted using the historical data of aircraft that have been used in SAR missions worldwide to characterize the common critical parameters to consider.

In order to perform SAR specialized missions, search and rescue aircraft, either from the commercial or military sector, have to be in compliance with the regulations set forth by the relevant authorities of that country.

SAR aircraft in Spain and Australia

For instance, the Spanish Aviation Safety Agency rules that any of the aircraft within their jurisdiction that are involved in the search and rescue mission to be regulated in accordance with its safety regulations. Moreover, in Australia, where periodic audits are conducted upon operators of the aircraft to ensure their compliance and also a continuous improvement, the authority has also regulated all aircraft that are involved in SAR missions [1].

The Aerospatiale of France and Westland Aircraft of the United Kingdom manufactured the Aerospatiale SA342 Gazelle. It is a rotary-wing aircraft with military purpose as primary usage. Indeed, even if it is lightweight, it was fitted with missiles such that it could be used as an anti-tank gunship. However, it is suitable to be used for scout and relief operation, which is vital in search and rescue missions [3].

SAR aircraft example in the UK

Furthermore, Airbus has developed EADS C-295 aircraft that is able to perform maritime patrol and reconnaissance, which are also part of the search and rescue mission. This SAR aircraft is fitted with two turboprop engines and it is designed with the ability to perform a mission in all weather conditions, making it the versatile, robust and also reliable aircraft [5].

What about SAR in Austria?

In addition, in Austria, the Diamond Aircraft Industries has built the DA42 aircraft. It has proven to be a successful design for cross country operations. For SAR missions, indeed, this is highly suitable for the operation as Austria has a specific structure of mountains and is a landlocked nation. The DA42 can be easily handled and has optimum stability and control, which is important for any long duration aerial observation [6].

On the other hand, China presents the Avicopter AC313. It is a rotary-wing aircraft with a huge fuselage that can offer bigger onboard space advantage for holding more medical or other search and rescue equipment [7]. This SAR aircraft can fit up to 27 passengers at one time or accommodate the simultaneous transfer of 15 injured people for medical evacuation, and this provides the suitable capability for a comprehensive or big scale extraction of injured personnel.

SAR aircraft in the US: civil and military operations

In the combat search and rescue missions, the US uses the V-22 Osprey for its agility to take off and land at remote confined spaces [8]. It is famous for its tilt rotors that can give a high-performance vertical take-off. Its rotors can be positioned vertically while during flight, or horizontally and hence enables it to fly like a fixed-wing aircraft. Furthermore, the Osprey aircraft has the capacity to hold up to 24 troops on board, which makes it very suitable for a big scale extraction of injured personnel during combat.

Fig. 1 shows the methodological framework that this study followed. Based on the findings in the literature, a SAR aircraft must be capable to carry payloads that can be excessive in nature. They could be medical and reconnaissance equipment, injured personnel, and others.

The aircraft should also be able to fly with optimum distances and altitudes, especially to avoid any unwanted firings from the ground in war zone areas during the missions. Moreover, the aircraft must also be able to be swift and agile in accommodating several different types of terrains during the operation like mountainous and others. Basing on this, five main aircraft parameters have been derived in this study to properly reflect these requirements:

To conduct a simplistic analysis based upon the established five parameters, they collected the data of 40 different aircraft that have been used in search and rescue missions [10]. The analysis of 40 aircraft data is appropriate to derive a fairly accurate conclusion. They applied a tabulation method in the comparison process of the identified 40 aircraft with respect to the five parameters [11]. Once the analysis is completed, the common and uncommon denominators are presented in graphical forms, showed below.

Fig. 2 presents the plot of maximum takeoff gross weight of the typical search and rescue missions aircraft. It can

be noted that the majority of the aircraft has a maximum takeoff weight in the lower region of the plot. They recorded the highest value as 86,000 kg while the lowest value is 930 kg, with the mean value of 16,144.65 kg as indicated by the mean line in the plot.

72.5% of the 40 aircraft has a maximum takeoff gross weight that is below the average value and only 27.5% is above that. From this finding, a simplistic deduction is made that most of the operators are keener to employ a lighter aircraft.

This can also entail that in most of the conducted search and rescue missions, the number of people intended to be rescued is often small and/or the aircraft is expected to hold only a little or few amount of equipment onboard.

Fig. 3 shows the data spread for the range of the considered aircraft that have been used in the search and rescue missions. They can observe that the longest achievable range by one of the aircraft is 6,435 km whereas the shortest range distance is only 350 km. On average, the aircraft range as being indicated by the average line in the plot is 1,712 km. Of the 40 aircraft considered in the analysis, 70% of them actually have a range capability that is lower than the average.

This implies that only 30% of them can reach a flying range farther than the average. Based on this observation, we can simplistically deduce that operators with a SAR aircraft that can only transverse a short distance or cover a small mission perimeter mostly conduct the search and rescue missions.

There appear to be almost the same numbers of aircraft that have a flight ceiling performance above and below the average value. Specifically, 55% of the aircraft has a flight ceiling that is below the average line while that of the other 45% is above the average line. This finding leads to a simplistic deduction that a mixture of aircraft has been operated for the search and rescue missions as the operations may involve both high and low altitude search. The mixture of high and low altitudes’ operation could facilitate optimizing the search and rescue missions [12].

In fact, we can consider and prefer a slow pace aircraft more than others. By moving too fast, some vital details of the search and rescue missions may be overlooked and also missed. As stated in [13], a slow pace operation will help to ensure that observations during the search are done thoroughly.

Last but not least. Fig. 6 presents the rate of climb data for the 40 aircraft that have been commonly utilized in

With only 27.5% of the aircraft are capable of climbing with a higher than the average rate of climb, a simplistic deduction can be made that it is imperative for the aircraft used in search and rescue missions to be able to climb as fast as possible. This is perfectly in line with the fact that such missions are often conducted at a slow pace in order to optimize the search for survivors or wrecks. 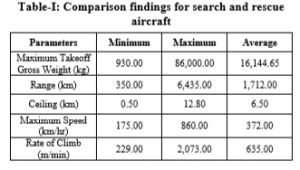 A closer look on the aircraft that have a high rate of climb, they are mainly the military type of aircraft such as LTV XC-142, Beriev Be-42 Albatros and Kazan Ansat, which are used in the battlefield. For such search and rescue missions within the combat areas, it is desirable for the aircraft to be capable of climbing fast after a rescue sortie in order to avoid enemy fire on the ground. All in all, the findings from the comparative analysis between the 40 considered aircraft are tabulated in Table I.

From the analysis findings on 40 aircraft that operate for search and rescue missions, several characteristics of the common search and rescue aircraft have been established based on the five critical parameters: maximum takeoff gross weight, range, flight ceiling, maximum speed and climb rate.

We can conclude that the majority of SAR aircraft have a small capacity in terms of payloads to carry equipment weight or injured personnel. Furthermore, we expect that the aircraft in such missions cover a small perimeter during the search and rescue operation, which is reflected by the low range capability. Since the efficiency of the search and rescue operations can be improved by having the search at both high and low altitudes, there are balanced flight ceiling capability among the aircraft used.

Finally, based on the effectiveness of the operation, they found that the typical maximum speed and rate of climb of the aircraft could be mostly on the lower end. All in all, with these findings, they provide some insights into the design and also mission requirements for an aircraft that is suitable to be used in search and rescue missions. They should carry out a new and detailed analysis to gain further understanding of these aircraft.

Search And Rescue In The UK, The Second Phase Of SAR Privatization Contract

Folding Drones For SAR Operations? The Idea Comes From Zurich