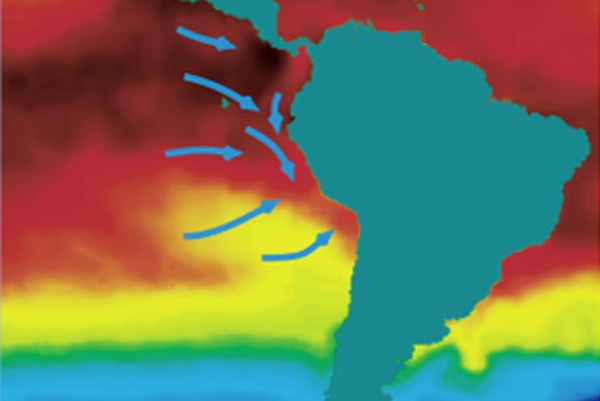 El Nino, a new global warming with the biggest health impact ever seen

The unfolding El Niño event is predicted by climate models to be a major event, possibly one of the strongest ever recorded.

Past events and meteorological data suggest that the risk of severe drought is high in PNG, Solomon Islands, Vanuatu, New Caledonia, Fiji, Tonga and Samoa, while Niue and Cook Island are subject to high risk of drought due to their more eastern location. The risk of drought is also high for Palau, Northern Marianas and Guam, FSM and Marshall Islands.

Above normal rainfall is expected in Kiribati between June and August 2015. There is an elevated risk of intense cyclones, potentially early start and late nish of the cyclone season, and an elevated likelihood of cyclones particularly in Niue, Samoa and Cook Islands (east of Tonga).

Heightened risk of certain vector-borne diseases such as malaria and dengue fever due to an abundance of mosquitoes and decreased immunity due to undernutrition are predicted for all the South East Areas and for India.

Every few years, an unusually warm current flows off the western coast of South America. Its appearance after Christmas lead sailors in Peru to christen it El Nino, the Christ-child in Spanish. Like a child, it is sometimes unpredictable, and sometimes creates havoc. In El Nino’s case, it brings natural disasters such as storms, floods and droughts and famine in far-flung parts of the world.

The term El Nino is nowadays used to refer to the periods of strong and prolonged warm weather, which influence the climate worldwide. The periods of the warm waters in eastern Pacific (El Nino) and periods of cooler waters (La Nina) are accompanied by changes of air pressure in the east and west Pacific: these are called the Southern Oscillation. The whole cycle is now referred to as El Nino Southern Oscillation (ENSO). The effects of La Nina are generally less pronounced and tend to be the opposite of those of El Nino.

The number of people killed, injured or made homeless by natural disasters is increasing alarmingly. This is partly due to population growth and the concentration of population in high-risk areas like coastal zones and cities. Their vulnerability to extreme weather conditions is also increasing. For example:

Large year-to-year fluctuations of natural disasters, some of which can be explained by El Nino, are described as the El Nino disaster cycle.

Recently, there has been growing recognition of the links between El Nino and disease. For example, doctors for many years were intrigued by the cycles of malaria in some countries roughly every 5 years. Such cycles in India, Venezuela and Columbia have now been linked to El Nino. Pronounced changes in the incidence of epidemic diseases can occur in parallel with extreme weather conditions associated with the El Nino cycle.

The El Nino cycle is associated with increased risks of some of the diseases transmitted by mosquitoes, such as malaria, dengue and Rift Valley fever. Malaria transmission is particularly sensitive to weather conditions. In dry climates, heavy rainfall can create puddles, that provide good breeding conditions for mosquitoes. In very humid climates, droughts may turn rivers into strings of pools, preferred breeding sites of other types of mosquito .

Generalizations about the association between vector-borne disease transmission and El Nino are not easy, as local transmission depends on ecology of the local vector species, whose responses to timing and amount of rainfall may differ.

On the desert and highland fringes of malarious areas, rainfall, humidity and temperature are critical parameters for disease transmission. In these places malaria transmission is unstable and the population lacks protective immunity. Thus, when weather conditions favour transmission, serious epidemics may occur.

In some highland regions higher temperatures possibly linked to El Nino may increase malaria transmission. This has been shown to occur in higher latitude parts of Asia, such as northern Pakistan. At the beginning of this century, periodic epidemics of malaria flared up in Punjab region (north-east Pakistan and north-west India) after excessive monsoon rainfall.

Before the advent of DDT for malaria control, the risk of malaria in Punjab increased five times following an El Nino.

From 1921, forecasts of malaria epidemics in that region were based on established relationship between rainfall and malaria mortality, creating probably the first malaria early warning system. Malaria is now controlled in Punjab, but it is still a serious problem in more arid areas in Western Rajasthan and Gujarat in India and Pakistan. There, too, the epidemics are linked to excessive rainfall. However, in some regions, malaria epidemics are linked to below-average rainfall.

Dengue is the most important viral tropical disease transmitted by mosquitoes.

Preliminary studies have shown a link between the El Nino Southern Oscillation and incidence of dengue in countries where the El Nino Southern Oscillation has a strong effect on the weather (e.g. some Pacific Island nations and Indonesia). In 1998, many countries in Asia suffered an unusually high level of dengue and dengue haemorrhagic fever, some of which may be attributable to El Nino-related extreme weather.

Outbreaks of Australian Encephalitis (Murray Valley Encephalitis – MVE), another mosquito-transmitted disease, occur in temperate south-east Australia after heavy rainfall and flooding associated with La Nina events. There is some evidence that outbreaks of Ross River virus infection are linked with La Nina also, but this is less certain that in the case of MVE. The public health impact of Ross River infection is greater than MVE in terms of number of people affected.

Rift Valley Fever (RVF) is a mosquito-transmitted viral disease, which primarily affects cattle, but can spread to the local human population. Outbreaks of human disease in eastern Africa always follow episodes of heavy rain (although in that region, El Nino is not always associated with heavy rainfall). A severe outbreak of disease occurred following excessive rainfall in north-eastern Kenya and southern Somalia during the 1997-98 El Nino. The rainfall patterns were unusually heavy for El Nino, resulting in flooding and major outbreaks of malaria and cholera.

A focus of research is centred on the ability to predict El Nino events several months in advance. Seasonal forecasts (also called El Nino forecasts) are used to predict major climate trends for anything from several months to a few seasons ahead. A seasonal forecast usually describes the probability of weather factors (temperature, rainfall) being above, near or below the average. Such forecasts are much more reliable during El Nino, because of its strong effect on climate. These forecasts are only experimental at the moment, but their accuracy and reliability is expected to improve in the near future.

Because El Nino events evolve over several months, it is already possible to give advanced warning of many impacts once the onset of an event has been confirmed.

Global warming is one of the most serious threats to our environment. Although we do not know how climate change may affect El Nino, it has been suggested that the phenomenon may become more intense or more frequent.

A report by a WHO Task Group has warned that climatic change may have important impact on human health. It is likely that the frequency and intensity of weather events around the world will be affected.

WHO is a member of the United Nations Inter-Agency Task Force on El Nino. The Task Force aims to develop a strategy towards prevention, preparedness and mitigation of El Nino-induced disasters. In order to reduce the impact of the next El Nino, the United Nations has asked for intergovernmental agencies support in activities of the International Decade for Natural Disaster Reduction and for its successor arrangement, the International Strategy for Disaster Reduction.

Seasonal forecasting is increasingly used to provide early warning of drought. There is a need for collaboration between meteorological and health sectors to produce health early warning systems.

A pilot study on the application of seasonal forecasting to malaria control has been undertaken in the Southern Africa Development Community region. In this study, the national meteorological services, health sector and agriculture sector have joined forces.

WHO has recently launched a new initiative to combat malaria-“Roll Back Malaria”. Targeting control efforts to years when there is a high-risk of El Nino increases the cost-effectiveness of malaria control; also, the judicious use of insecticides can delay the development of resistance.

Diphtheria back in Spain after 30 years: "EU member States must improve immunisation coverage"