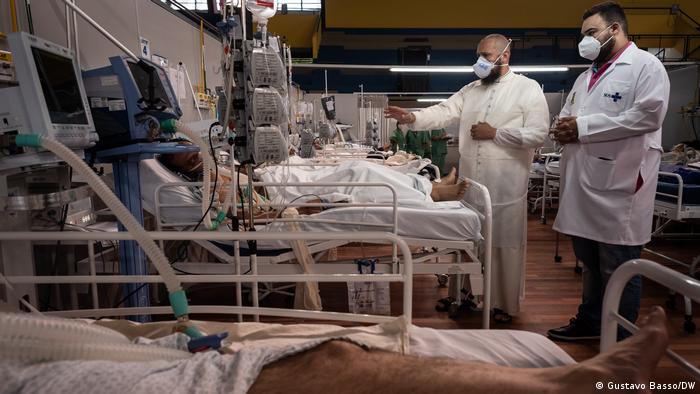 Shortage of sedatives aggravates pandemic in Brazil: Medicines for treatment of patients with Covid-19 are lacking

Brazil, Medicines for treatment of patients with Covid-19 are lacking: the warning about the low stocks of the so-called “Intubation Kit“, used for the treatment of severe critical patients of Covid-19, was given weeks ago by 18 states of Brazil.

On Wednesday (14), the governor of São Paulo, João Doria, informed the Ministry of Health that he needs to receive the drugs within 24 hours, at risk of shortage.

In Rio de Janeiro, the scenario is also critical.

There are reports of intubated patients tied to ICU beds without sedatives, essential to prevent the patient from feeling pain or attempting to remove the tube involuntarily.

The state currently has the highest volume of patients intubated due to Covid-19 since the beginning of the pandemic.

With the worsening of contamination throughout the country and the consequent increase in hospitalizations in severe condition, the producers of the drug could not meet the exponential demand.

However, governors and health secretaries also point to another failure of the Federal Government to combat the health crisis.

In March, the Ministry of Health began to make administrative requests that force factories to allocate the surplus of their production to the Ministry, which then distributes the drugs to the states.

This measure prevents states and municipalities from buying the drugs from national suppliers and, therefore, some governors have resorted to international purchases.

In a press conference, João Dória said that the former Minister, Eduardo Pazuello, made a “very serious mistake” in confiscating the insums that companies produce.

“No state, municipal or private government can acquire these insum because companies have received a confiscation, a kidnapping from the Federal Government.”

In August 2020, the National Health Council (CNS) reported that the Ministry of Health canceled the purchase of 13 drugs, among the 21 used in ICUs, justifying the high price.

The document stressed the purchase need to avoid a possible shortage of medicines, which would lead to the collapse of the country’s health system.

“Considering that the lack of these drugs puts at risk the entire structure planned for health care during the pandemic of the new coronavirus, because even with beds available, without these drugs it is not possible to perform the procedure, and can lead the entire health system to collapse“, explains the CNS.

On Thursday (15), the current Minister of Health, Marcelo Queiroga, announced the sending to the states of 2.3 million units of medicines used for intubation; the whole lot was donated by companies.

Emergency Expo, the Regional Coordination of Civil Protection of Piedmont will also be there: this is what the stand will look like