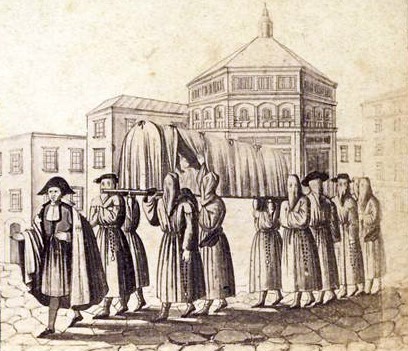 It was in the Middle Ages that these forms of aggregation took a more defined identity, from the 10th century onwards.

In that historical period, the Confraternities often found themselves playing a leading role at the religious and civilian level.

The growing importance, even economic, assumed by some Confraternities, and their great capacity for popular mobilization, will provoke, from the 16th century onwards, repeated attempts to alt its development and activity.

Always poised between the suspicion of heresy and opposition to political power, enriched by donations and bequests, the Confraternities became the most widespread voluntary association form in Europe. 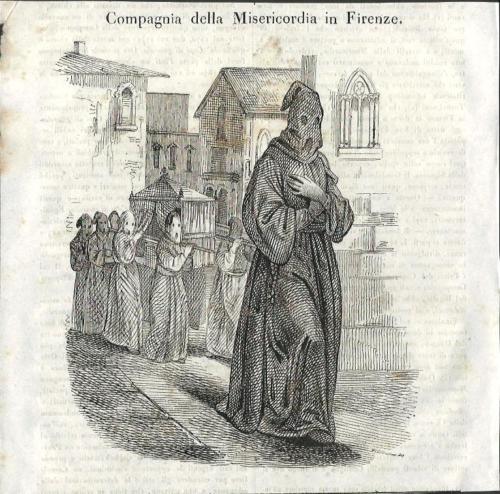 With these roots and on these premises, the phenomenon of the Misericordie begins with the first Misericordia, that of the city of Florence, dating back to 1244

In the mid-1300s the Municipality began to pay greater attention to the Confraternities with the undeclared purpose of managing their assets and directing their social policy.

This political line was facilitated by the attitude of the Captains of the various Companies constantly looking for political protection for their associations.

Towards the middle of the 15th century, in Florence as in the rest of Europe, all the companies dedicated to charity and social intervention came under the direct or indirect control of the state which reorganized them according to its own social policy goals.

In Florence the Misericordia will be reconstituted in an autonomous form in 1490, with Statutes that profoundly changed its social establishment, with a wider participation of the people.

Starting from the 16th century, the different Confraternities began to establish forms of reciprocal association in order to “profit from the indulgences” of which they were beneficiaries. 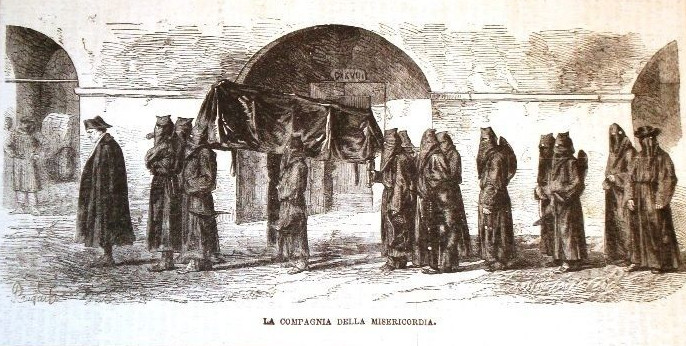 In Tuscany, the policy of the Medici, inaugurated in 1490 with the reconstitution of the Misericordia of Florence, produced the progressive transformation of the ancient associations into new Misericordie Confraternities

Subsequently, with the unification of Italy and the capital in Rome, among the most politically attentive Misericordie emerges the need to give life to a superior organism, representative of the local needs and traditions of the entire movement, to which to delegate the management of the dialogue with the central government.

In 1899 the representatives of 40 Confraternities met in Pistoia and gave life to the Federation which was then transformed into a Confederation in 1947.

Inspired by the evangelical dictates, flexible and timely in the intervention, polyvalent and always available to undertake various activities, the Misericordie in Italy as we have seen have ancient origins, and have always offered their volunteers the opportunity to provide an important service for all those in needing of assistance.

The Misericordie today mainly turn their attention to assistance, more specifically to the first aid with the ambulance

Popular interest and solidarity have always supported initiatives aimed at providing the territory and the community with a service in which volunteers have achieved a great level of efficiency and quality in the interventions.

They create specialist outpatient clinics, making available to the population the best that can be offered in terms of health checks.

Hospital care is another sector affected by the Misericordie, mainly to make hospital environments as livable as possible.

Assistance to drug addicts and AIDS patients are other fields in which this type of volunteering is gaining ground due to the ever-numerous deaths that require, in addition to adequate preparation and training, a more widespread preventive action.

Hence the commitments of the Misericordie in these situations: prevention, assistance and dialogue.

Also the assistance to the terminally ill, addressed not only to the patient, but also to the entire family in the most difficult moments to alleviate their suffering, and the assistance to chronic uremics in hemodialysis treatments, a highly technical aspect that requires great preparation of the volunteers.

The social sector is also one of the most complex services as regards the psychology of its approach. 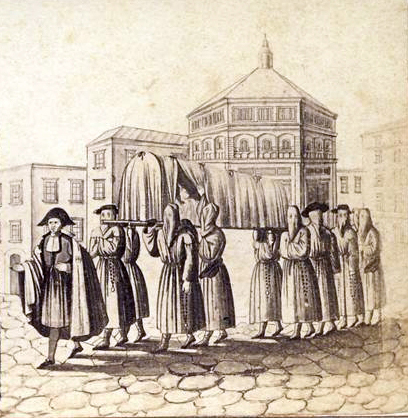 Entertaining the elderly, home assistance and counseling centers to name a few, are services that play a very important role in the communities, as they guarantee the improvement of the lives of the people who needs them and they fill the void sometimes left by the public health care system where there is a shortage of facilities and personnel.

Assistance to prisoners and their families is another important sector that requires great dedication since the recovery of prisoners is essential for their reintegration into society, to find a job, and to avoid the return to crime as a source of financial support.

The Civil Protection service should also be highlighted, as in Italy there are frequently collective emergencies due to natural disasters that require technical and qualified preparation to rely on in the event of a disaster.

We can therefore see how much the Misericordie Confraternities are part of the history of welfare in Italy and are still an integral part of the communities today.

Fire brigade and civil defence vehicles Prospeed: when the going gets tough, the chassis makes the difference