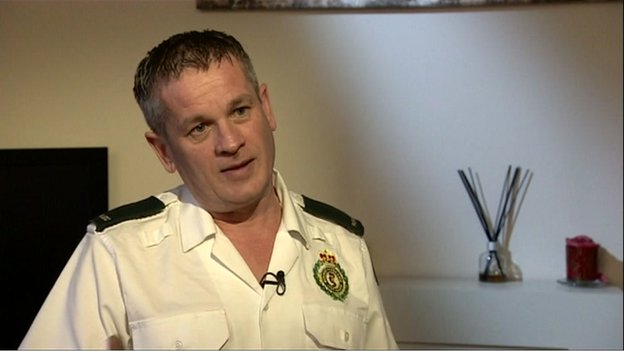 A whistleblower paramedic has been banned from two hospitals after he spoke out about overcrowding in A&E.
Stuart Gardner, of West Midlands Ambulance Service, received the ban after telling the BBC under-pressure emergency units were “not safe”.
He said the chief operating officer (COO) of Worcestershire Acute Hospitals NHS Trust has told him he was “not welcome” on either of its sites.
The trust said the ban was imposed as Mr Gardner’s comments had upset staff.
It said its conversations with him were related to “personal upset” his comments had caused among some A&E staff.

‘Clear victimisation’
Union bosses are now considering taking legal action in the case.
Mr Gardner told reporters last week that he had seen patients being treated in corridors at the Worcester Royal Hospital.
He said all he did was “raise concerns” about the location of treatment, and had not criticised the behaviour of doctors or nurses.
“I was highlighting that issue and saying [patients] should have been on the wards,” he said.

In light of his comments, Mr Gardner said COO Stewart Messer had banned him from entering the hospital in Worcester and the Redditch Alexandra Hospital.
Mr Messer e-mailed the ambulance service the night before Mr Gardner appeared on TV, and warned he would “not be welcome” on trust property if he was “critical of managers or emergency department staff”.
After the broadcast, Mr Messer e-mailed again and wrote: “[Mr Gardner] is no longer welcome on either of our hospital sites, so can you please ensure that he does not attend.”
Ray Salmon, Unison area manager, said the union was threatening legal action against the trust.
“Stuart informed the hospital he was going to blow the whistle, they threatened him, he blew the whistle, they’ve now excluded him from site,” he said.
“It’s clear victimisation of a whistleblower.”
The trust said it “actively encouraged” whistleblowing and it was “critical” to preserve good relations with the ambulance service.
“[But] in response to this isolated incident, we have suggested it would be appropriate for Mr Gardner to address the upset he has caused amongst A&E staff who are working tirelessly under… extreme pressure,” it said.
West Midlands Ambulance Service said it did not wish to comment.
However, the BBC understands it wrote to the trust to inform it Mr Gardner would continue to be deployed in the same way.

Sleep Problems in First Responders and the Military