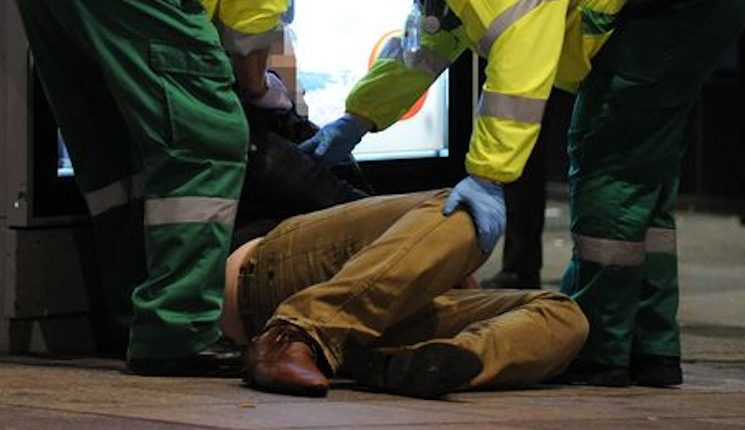 Paramedic assaulted by a significant other, ambiguous relationship between the caller and the unconscious patient

Paramedic safety is mandatory. But there are many situations where the paramedic is assaulted by bystanders or relatives of the victims. This is a case report on an assault

Surely some paramedic experienced to be assaulted during a prehospital intervention with the ambulance, like when some female is threatened by males, for example. Or maybe, it can happen that you are called in some downtown suburb and you find there a man and a woman who apparently have a relationship, but you cannot understand what kind of relationship is that. This can become a problem when the male caller has also an aggressive behaviour and start speaking in a confusing way.

The problem is not for the practitioners, but also for the patient. As you surely know, if someone is threatened, he/she cannot do a good job, and in particular, a practitioner cannot manage to treat properly a patient if threatened. As a consequence, the patient can risk life.

We collected the following testimony of a Canadian Advanced Care Paramedic who had been called to dispatch with a colleague (another ACP) because of a woman with apparently breathing distress.

The threats of violence we face are more specific to the patient themselves, their families and/or friends, or bystanders. Although the threats of extreme violence are low, we do develop contingency plans for such events. EMS has spent a significant amount of effort in developing policies and procedures that emphasize the safety of frontline practitioners. We have a strong working relationship with our local, provincial, and federal police agencies.

As an organization, frontline practitioners are given the final authority on whether or not they enter the scene based on their own risk assessment. When crews are faced with violent situations, their radios have emergency buttons and they have specific radio codes they can communicate that will have dispatch assign police to the event immediately.

The majority of violence experienced has been from the patients and/or their family and friends. Random and targetted violence towards EMS is very rare.

In 2009, dispatch received a call from a male, stating his “girlfriend” was having trouble breathing. We found the patient and the male caller outside one of our local homeless shelters.
Upon our arrival, the male aggressively approached us and demanded we take his “wife” to the hospital immediately. I said that we were more than happy to take his wife to the hospital, but, let us first get her in the back of the ambulance so we can properly assess and potentially treat her en route to the hospital.

While we were putting the patient in the back of the ambulance, I directed the male to the front passenger seat as is our policy for transporting family and friends of our patients. This did not sit well with the male who became extremely confrontational and stated that he is not letting his “sister” out of his sight and that we are not to do anything without his permission.

At this point, I became concerned about the relationship of the male to our patient; he initially referred to her as his girlfriend to dispatch, then wife on our arrival, and most recently, sister. I began to wonder if this male was a predator. My priority became determining whether the greater threat to the safety and well-being of the patient was the medical condition they called 911 for or separating her from this male figure.

This decision was made easier when the male sensed my concern when I asked him to clarify his relationship to the patient. To which he replied, wife, girlfriend, sister; he stated that she had to be whatever he wanted her to be. He then began to threaten me, took a striking posture, and clenched his fists.
At this time, I radioed dispatch that we were at risk and needed police assistance immediately. I positioned myself between the male and the entrance to the ambulance. I closed the door so he could not gain access to the patient or my partner. Fortunately, I was able to to keep the situation from escalating till the police arrived and removed the male from the situation.

The homeless shelter in the case study is a frequent response location for EMS. The location itself is relatively safe; due to the operating policies and security measures, they have in place. However, the surrounding area is known for a high drug and alcohol abuse, in addition to, frequent violent events. Being familiar with this location, both my partner and I felt comfortable responding to this event. We knew to be very cognizant of our environment.

The first security concern we faced was the aggressive nature of the male caller on our arrival. Was this just someone extremely concerned about someone they love? Did they feel helpless and need us to establish control so they could relax and know their loved one was in good hands? Or were they a serious threat and intent on potentially harming us if we didn’t do as they wanted?

The patient looked in mild distress, so my partner focused on them. I proceeded to engage the male figure and watch over the safety of the scene. The male appeared to be calming as we walked to the ambulance and talked. However, when he was told he could not enter the back and would be transported in the front he once again became aggressive. At this point, I gave consideration to not allowing the male figure to be transported with the patient.

The second concern arose over the male referring to the patient as his girlfriend, then wife, and then sister. It is common for homeless women to fall prey to men who use them for money, drugs, sex, etc. Were we dealing with a predator? Was the patient’s condition severe enough that it would be best to ignore the situation if he was a predator? Would our safety be at risk if we pursued the relationship between the male and the patient?

The answer became clear when I questioned the male about his relationship with the patient. He became aggressive and took a striking posture. At this point, I made the decision to protect my partner and patient by stepping between the male and the ambulance then closing the door. I then activated the emergency button on our radio and communicated our need for police. Dispatch confirmed the request. While waiting for police, I kept a distance between myself and the male. I continued to talk with him to try and calm him down.

Within minutes, police arrived and secured the scene. I explained my concerns and they removed the male from the scene. After transporting the patient to the hospital, my partner and I took time to debrief regarding the event. We discussed whether we would have changed anything if faced with this situation again and we both felt we responded well. We did give consideration to what we would do if the patient’s situation had been of greater concern but, ultimately, we decided you can’t make that decision with 100% certainty without being in the moment. Before returning to service, we made sure each other were good to go and continued on with our shift.

Paramedics Assaulted During Stabbing: It’s Never What You Think Or Are Told

12 Months In Prison For Assaulting An Emergency Worker

Continental showcases innovations for smarter and safer cities at CES 2019