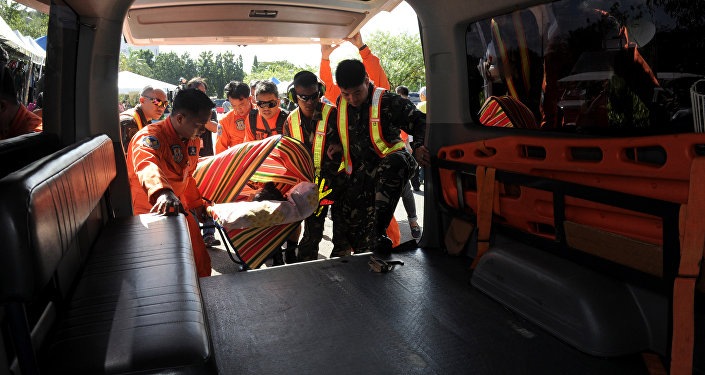 Emergency medical services have to face many different situations, like drunken bystanders who can reveal a real danger.

The #AMBULANCE! community started in 2016 analyzing some cases. This is a #Crimefriday story to learn better how to save your body, your team and your ambulance from a “bad day in the office”! Drunken bystanders represent a not easy obstacle to overcome for paramedics.

The protagonist this time is a Registered Nurse. He is resident of Bago City, Negros Occidental, Philippines, and likewise serving the city as one of the Team Leaders of the City Disaster Risk Reduction and Management Office (CDRRMO).

The CDRRMO cater to pre-hospital care and emergency services to the City and other nearby cities and municipalities in need. It is headed by a Local Disaster Risk Reduction and Management Officer (LDRRMO), Dr Merijene C. Ortizo who oversees and heads the entire operation procedures and other relevant activities of the Office.

The entire City and its people have identified the existence of the Office and are reliant to their emergency needs, be it in accidental or medical cases. They are on a 24 hours 7 times a week operations with 4 Teams working on 24-hour rotational duty. His team is identified as EMS (Emergency Medical Service) 2.

They are composed in 1 Team Leader or the Triage Officer, 1 Assistant Team Leader, 2 Ambulance Nurses and a Driver who is a certified Emergency Vehicle Operator. Each Team Leader is given a mobile radio used for communication and coordination of incidents. The team on duty is provided with necessary Personal Protective Gears (PPG’s) used in response to operations.

As the Team Leader of EMS 2, our protagonist is in charge of ensuring the safety and welfare of the entire team during the whole period of the operation. He needs to survey the scene upon arrival and give directions on what to prioritize as the Triage Officer during a mass casualty incident.

“On August 2016 at on or about 9:30 in the evening, the office received a call regarding a vehicle accident involving the collision of two motorcycles at Barangay Lag-asan, Bago City. After a minute of the call, our team dispatched from the operation centre. We arrived on the scene approximately 4 minutes from the EOC.

Upon arrival, we noticed that there is existing chaos between 4 to 5 bystanders and that the unconscious patient has been moved from his original position. They are verbalizing and imposing that the response to their call was delayed and was clamouring to transport the patient immediately without proper pre-hospital care. As the Team Leader, I explained to the bystanders that we are authorized to provide the patient management before transporting to the hospital.

A number of drunken bystanders refused to listen and insisted that the patient is transported immediately. As the argument continues, an intoxicated bystander pushed forcefully one of the ambulance crew. He told him proudly that he is a village official and threatened the whole team that if we do not do what he demands he will sue us. A few of the drunken bystanders verbally agreed to the arrogant official making the situation worst and putting pressure on the team.

Despite the commotion, the team still continued providing immediate treatment to the patient. But because of the ongoing bombardment of negative accusations, we lost our composure. We have to answer back and defend ourselves which resulted in an almost brawl. The police arrived just in time to stand in between and handle the commotion.

The team calmed down and went back to attend the patient for transport. Later did the team know that the patient was the village chieftain (barangay captain-leads the barangay followed by 7 kagawads) of one of the barangays of the city and that he is the companion of the intoxicated bystanders in the drinking spree.
After the endorsement of the patient’s case at the hospital, while we were fixing our used equipment, two of the intoxicated bystanders arrived at the emergency room. One asked for an apology from the team while the arrogant official continues to impose threats. He then grabbed the hand of the same crew he pushed at the scene. He verbally insults the crew and forcefully asked for his identity. The team decided to leave because we were done with our job and so as not to further cause a scene. But the official endured his threatening stare to us.

Early morning the following day, the team reported the incident to their LDRRMO. She sought advice from the Department of Interior and Local Government (DILG) and instructed to have the incident reported as blotter at the police station. The accused arrogant official was summoned to report at the DILG’s Office to explain. He then asked for an apology at the CDRRM Office for his misconduct and threatening accusations. He defended himself that he was under the influence of alcohol which resulted in his violent actions and that he overreacted due to his concern to the patient.”

Based on the incident, I presume that our team had encountered a situation that had tested our patience and ability to maintain our composure. We should have let go, never reacted and pretended to be deaf to the intoxicated bystander’s verbalization. As responders, we are trained and prepared to those types of scenarios because it is part of our drills and training.

But human as we are, are also sensitive. We also have our limitations which have prompted us to react to the situation thus increasing our potential threat to the community. The incident has given a lot of realizations that I need to consider. First, our country does not have an established EMS LAW that can protect legally, us, the responders. We are only working with the guidance of Republic Act 10121 which is the mainstreaming of Disaster Risk Reduction and Management.

The response is considered as 1 of the 4 thematic areas under DRRRM namely Prevention & Mitigation, Preparedness, Response, Recovery and Rehab. Second, our Office coordinates with the Philippine National Police during the vehicular crash but they are unable to deliver effective security to the team as evidenced by delayed arrival at the scene.

Third, a lot of people do not understand or has misconceptions with regards to our job especially in our City and in our country in general. Even though the Office constantly capacitate the people through proper education of the risk involved and what to do in an incident, still they remain to be hesitant and becomes the number one complainant on the scene. Instead of being a Good Samaritan, drunken bystanders become a potential threat to us especially if they are intoxicated with alcohol.

The Office is now strengthening our security during response through multiagency coordination and the establishment of the crowd control unit. Lastly, we have to increase our focus on the patients at all times and ignore the unnecessary negativity on the scene. Our office has produced a number of trainers on Mental Health and Psychosocial Support (MHPSS) who provides us with a support team in traumatic events.

In combat to the many incidents we encounter, the Office continuously conducts Community Based Disaster Risk Reduction and Management (CBDRRM) to give emphasis to communities who have misconceptions with regards to the main purpose of our job. Further, we have established linkage to the Department of Health’s program on Violence and Injury Protection Program (VIPP) to address our existing problems on violence. After all, the main objective of our Office is to preserve life and prepare the people of the risks and hazards that they may encounter every day.”