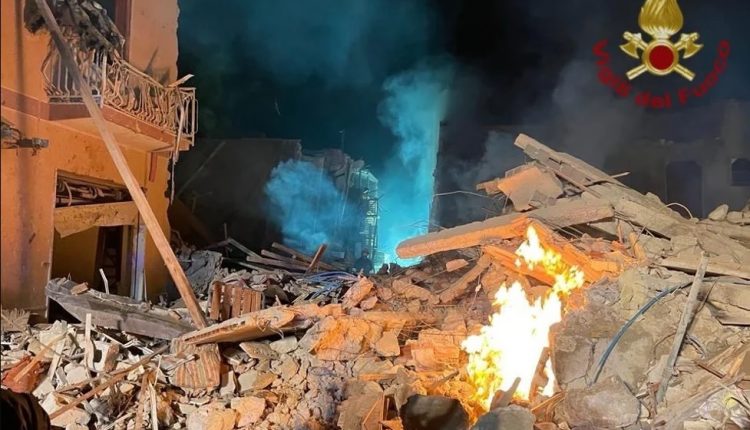 Firefighters worked through the night amidst the rubble in Ravanusa, a small town in the province of Agrigento, where last night an explosion caused by a gas leak destroyed a four-storey building and seriously damaged three other adjacent buildings

Contrary to initial reports from the civil protection authorities, a fourth victim has not yet been identified.

Since last night, the police, the Red Cross, regional civil protection teams and the forestry corps have been working tirelessly on the site: in all, about two hundred rescuers have arrived in the small town in the Agrigento hinterland.

The scene that appeared before the eyes of the first arrivals was an apocalypse: flames and rubble everywhere in the area between Galileo Galilei and Trilussa streets.

In the middle of the night, when the clock struck 2.45am, after hours of uncontrolled rumours, the head of the Regional Civil Defence, Salvo Cocina, arrived on the scene and gave the first count of the missing: ‘Ten people are missing’.

Shortly before, a voice coming from under the rubble had warmed the hearts of those who had been digging for hours in search of people alive at the risk of their lives, since it had not been possible to isolate the distribution of methane gas throughout the area after the explosion and the flames had been extinguished shortly before midnight: it was that of an elderly woman, extracted alive from the pile of stones.

The woman, with several fractures, was transported to the San Giacomo d’Altopasso hospital in Licata.

Around 3 a.m. rescuers rescued a second woman who was still alive and, unfortunately, in the course of the hours, the rubble also returned the bodies of the first two victims.

One of the first to arrive on the scene and realise the gravity of the situation was the mayor of Ravanusa, Carmelo D’Angelo, who immediately launched a dramatic appeal on Facebook: ‘There has been a disaster, we need tankers and mechanical means’.

During the tragic night in Ravanusa, the archbishop of Agrigento, Monsignor Alessandro Damiano, offered words of comfort: “I am close to the community of Ravanusa, which is experiencing moments of apprehension following the explosion caused by a gas leak.

I pray for those who are working to contain the danger and to ascertain the hoped-for absence of victims.

May the Lord keep us strong in our tribulation and open to hope.

Hope that daylight will help in the search for the missing.

Fire Brigades In Italy: Let’s Explain Them Step By Step

Russia, the International Red Cross and Red Crescent and the Ministry of Emergencies discussed cooperation