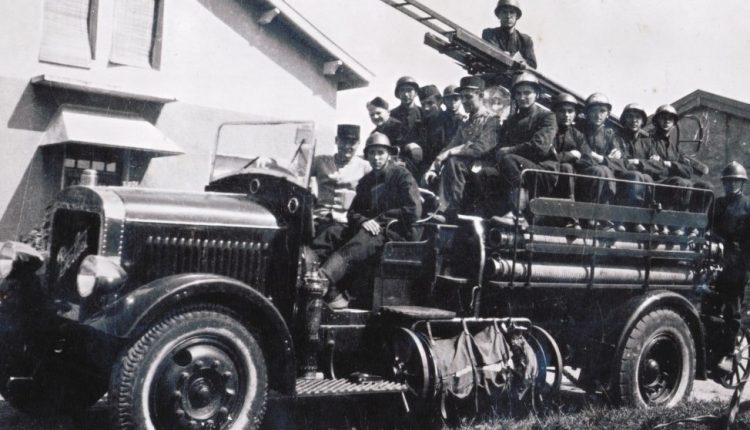 The dry wooden structure of the building fed the fire and in no time it already consumed the roof of the great hall and that of the south pavilion.

The lead from the roof melted, creating a rain of molten metal that fell and set fire to new portions of the building.

Immediately alerted by the guards, many citizens immediately set out to fight the fire. 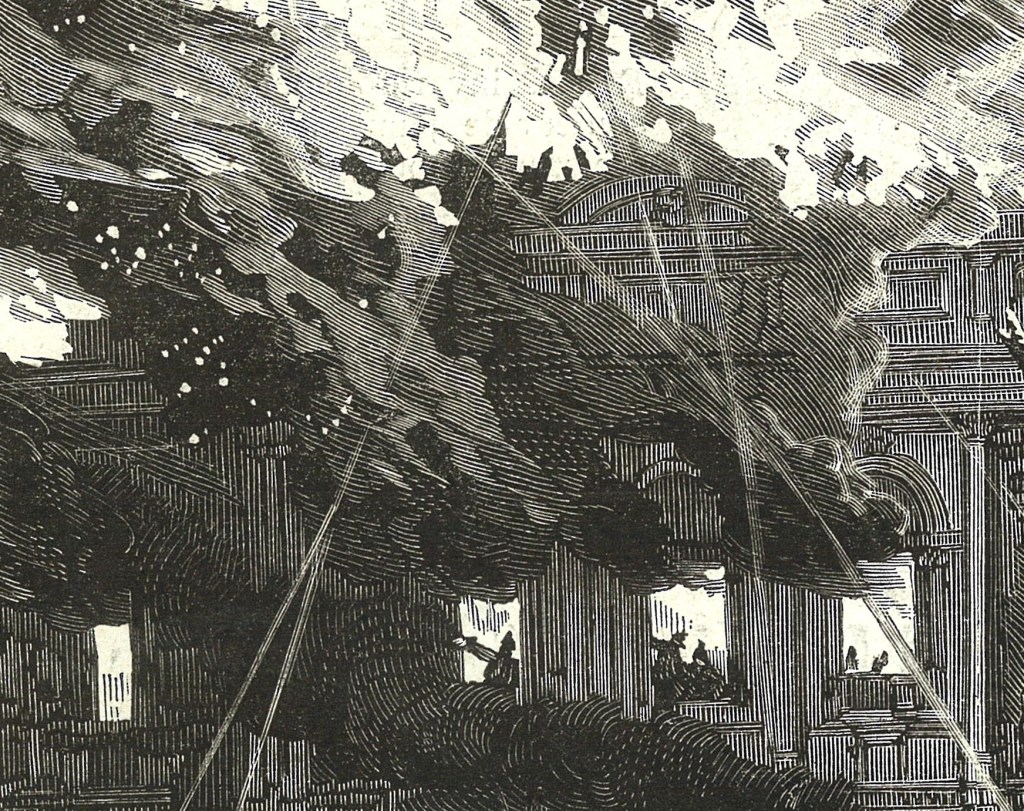 However, the fire had also spread to the clock and bells, which falling further weakened the structure, particularly the vault that supported the dome.

Suddenly the wind changed direction and the whole building caught fire and so the carpenters and workers were forced to tear down the structures and roofs above the archive room, thanks to this effort they deprived the fire of its fuel and it began to weaken.

Anyhow, for several days after continuous surveillance was needed to check that the fire did not restart due to the high temperatures.

Furthermore, the volunteers at the time did not have much equipment other than a hand pump, which is unlikely to have played a major role in this disaster, as the height and breadth of the fire were such that the jet of the machine was completely insufficient to cover the distances.

Subsequently, the Fire Brigade began to acquire specialized equipment and machinery and an example was that of the Porta stairs.

In 1871 two Italian brothers from Milan proposed to France some aerial ladders of their own invention that the Fire Brigade of the Lombard capital had already put into service in 1862. 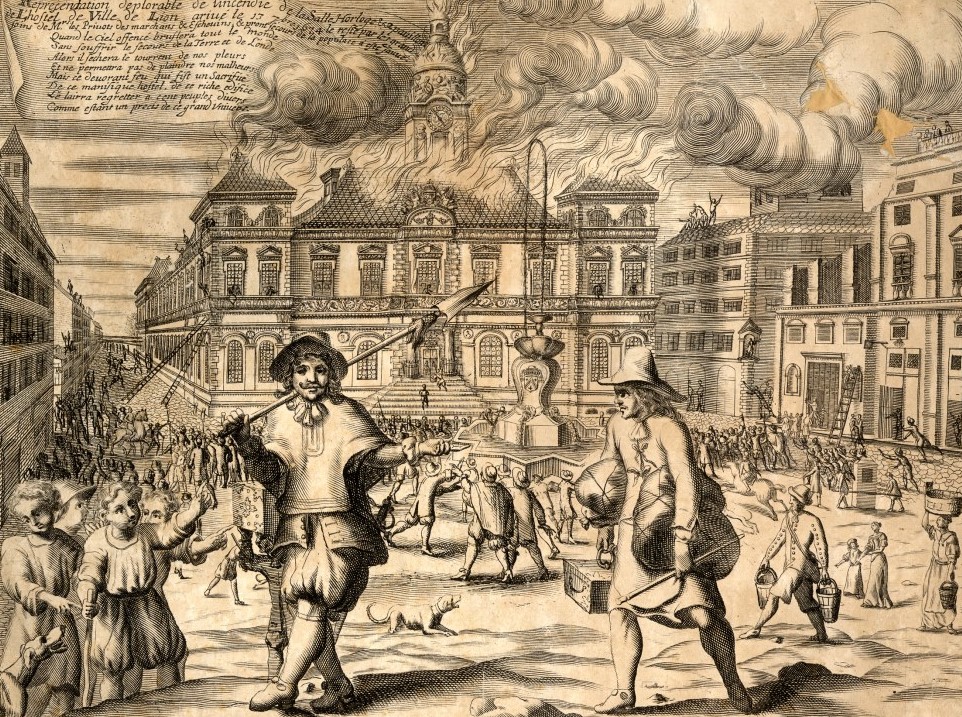 In December, these inventors arrived in Lyon and presented two of their models to the Sapeur Pompiers 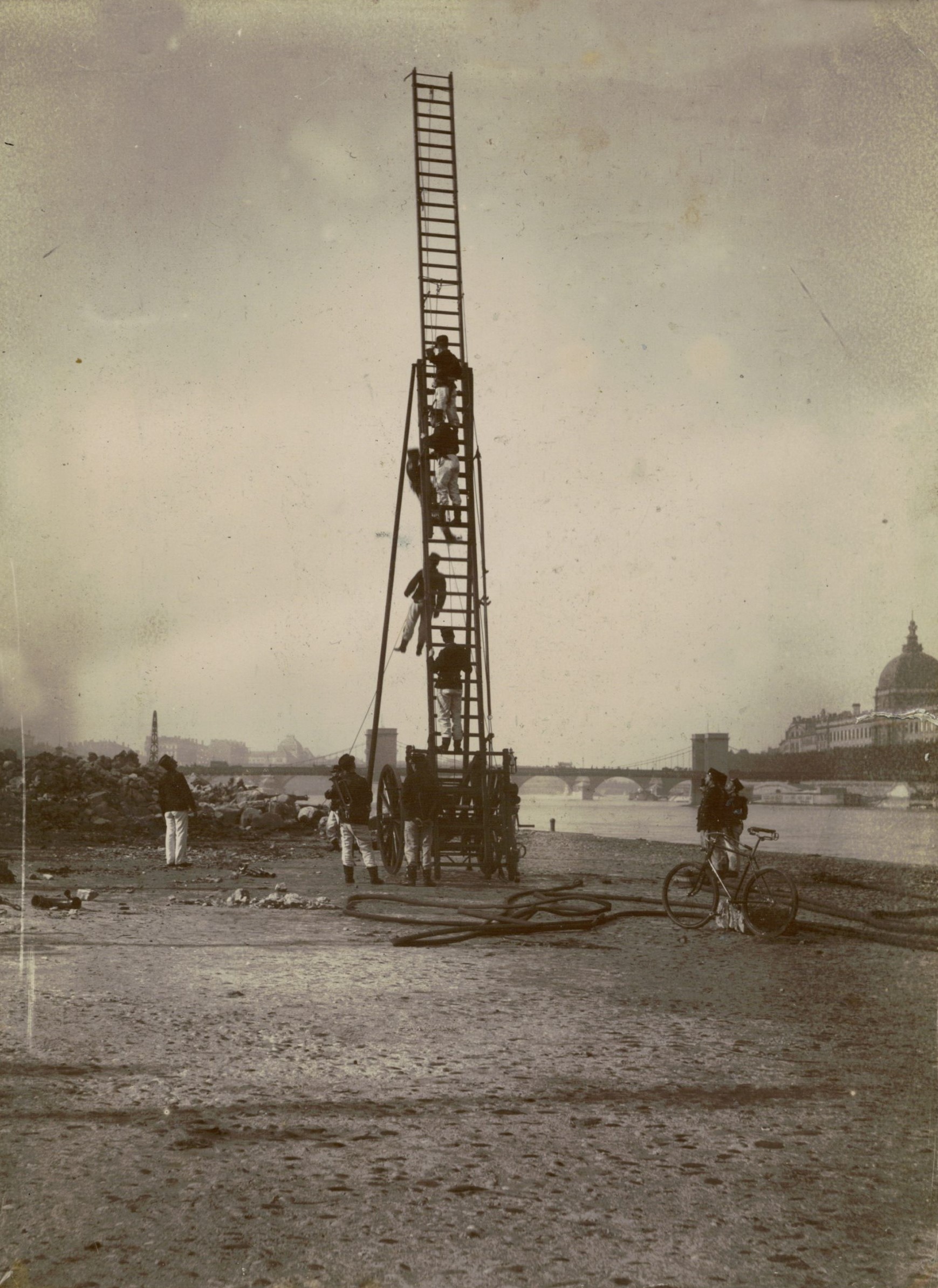 The highest, fixed on a cart pulled by a horse, reached a staggering height of 22 meters.

Each staircase was divided into partial lengths of 3 meters which fit together by interlocking.

These ladders guaranteed firefighters to be able to carry out rescue operations at great heights in greater safety and speed, in fact the ladder required only about six minutes to be assembled and be ready for use.

The same year, precisely on the evening of Saturday 2nd April, a violent fire broke out at the Théâtre des Célestins.

Despite the timely intervention, the fire rapidly assumed enormous proportions.

The flames burst through the roof and also spread outside thanks to the materials that made up the theater: a lot of wood, curtains and fabrics of all kinds.

Despite all efforts and twelve hand pumps at work at the same time, a building adjacent to the theater was also engulfed in flames.

Only much later did two steam pumps arrive on site, much more efficient than manual pumps, which finally managed to control the fire.

Unfortunately only charred walls remained of the theater and the neighboring building.

A few years after this event, two separate monuments dedicated to the fire brigade and police officers were inaugurated at the Loyasse cemetery, located on the Fourvière hill just outside the city center.

These memorial sites show the attachment that the authorities and the population of the city of Lyon have for the Fire Brigade.

Built by Abraham Hirsch, architect of the city, this monument was inaugurated on the 30th of October 1896.

Located on the axis of the main entrance, it consists of a 5 meter high stele, under which there is an ossuary and a vault. There are preserved the remains of 16 firefighters who died in the fires starting from 1851.

More than a century later the city also dedicated a museum to its firefighters. The history of this museum begins in 1971, when it was inaugurated in the premises of La Duchère, on the initiative of the commander of the Lyon Fire Brigade.

The first objective was to protect the out of service vehicles and equipments from deteriorating and this objects, thanks to a group of enthusiasts and former firefighters were gradually restored to their original splendor.

In 2005, the museum received the appellation of Musée de France by order of the Ministry of Culture.

This official recognition was of great importance as it guarantees funding from the museum’s Ministry for Scientific and Cultural Research. 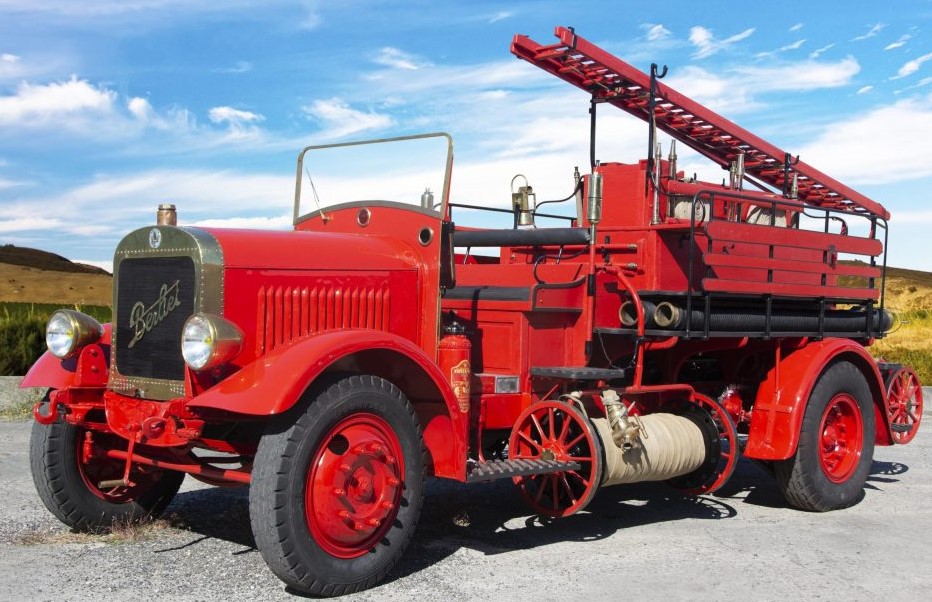 The museum’s activity has intensified and diversified since 2010, with an opening to all types of public and a progressive integration into the local cultural network.

Major renovations were also undertaken on the permanent exhibition gallery, which had remained unchanged for 40 years, making the museum more modern, more educational and wider in scope.

In the process, the museum’s website was also renovated twice to make it more accessible and modern.

The fire and rescue service of the department of the metropolis of Lyon, very involved in the museum, still contributes enthusiastically to the awareness and education actions for the firefighter profession.

The museum team, made up of five permanent members and thirty active volunteers, oversees the conservation, study, enhancement and enrichment of the collections, which today number about 150 vehicles, a function of great importance for preserving the history of one of the most important fire brigade departments in France.

The German Museum Of Fire Fighting Of Fulda

Football, Arturo Vidal hospitalised in Chile for Covid: 'Get vaccinated'