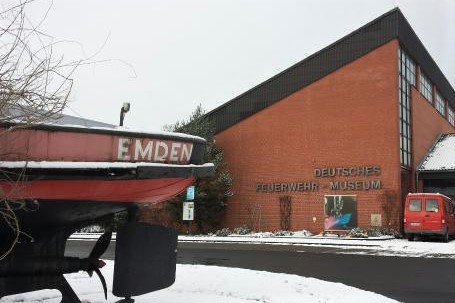 The German Fire Fighting Museum presents the history of Fire-fighting and Fire Prevention, not only as special branch of history and technology, but also as a subject of cultural and social history

Established in 1988 in Fulda, a beautiful centre in the State of Hesse, in the reunited Federal Republic of Germany, the new building contains two spacious display halls, which are connected by an administrative wing.

In an exhibition space of approximately 1,600 square metres, the exhibits are surrounded by historical backdrops, whereby the unique items from simple leather buckets to complex fire appliances of more recent times are vividly presented in their contemporary context.

Fulda enjoys the proximity of the natural park area of Vogelsberg and the outstanding Rhoen biosphere reservation.

The Museum attracts in the region around 25,000 visitors per year from Germany and abroad, to see the story depicted of organised fire-fighting in the German speaking area from the Middle Ages to the present day

Larger fire appliances on display are situated in below areas, surrounded by raised pavements, which heightened viewpoint enables visitors, especially children and wheel-chair users to have a comfortable look at even the interior details of the exhibits. This arrangement also makes it possible to display exhibits in their particular functional context.

Among the exhibits are important examples; such as the oldest known hand pump in the World (1624), extensively decorated hand pumps from the Baroque and Classicism eras, the oldest known horse-drawn turntable ladder (1808), a still working steam fire pump (1903), the first electrically propelled turntable ladder in the world (1903) and early fire appliances with petrol engines.

Despite these superlatives pieces the Museum puts care into ensure a well balanced display of fire-fighting history, so the equipment of the smaller volunteer brigades receives as much consideration as the more developed vehicles of the large professional organisations.

Therefore both fire-fighters from rural areas and their professional colleagues from municipal or industrial fire brigades can easily find their particular aspect of history.

Visitors who are not members of fire brigades, can also see a comprehensive overview of a broad range of topics.

You can try out for yourself the intensity of the operation of a hand pump, which is situated next to the water pond of the Museum

The facility also has a play area that has been provided for the youngest visitors with an original fire appliance driver’s cab, especially prepared to inspire kids into entering the world of firefighters.

Its also possible to book a guided “behind the scenes” tour of the reserve collection.

The archives and the comprehensive library are available for everyone that wants to know more about the history of firefighting.

In the Museum shop, enthusiasts of all ages can find a wide range of fire engine models and specialized books on fire and fire-fighting.

A truly magnificent and unique museum dedicated to the preservation of the heritage of german fire fighters.

27 May, International Day of Emergency Medicine: the importance of the EM-day

Mental and physical preparedness of firefighters: a study on resilience and…