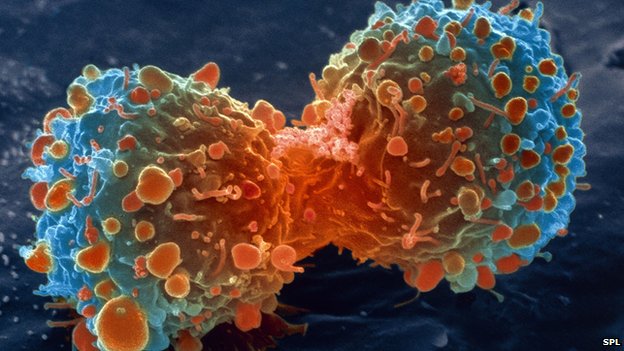 Most types of cancer can be put down to bad luck rather than risk factors such as smoking, a study has suggested.
A US team were trying to explain why some tissues were millions of times more vulnerable to cancer than others.
The results, in the journal Science, showed two thirds of the cancer types analysed were caused just by chance mutations rather than lifestyle.
However some of the most common and deadly cancers are still heavily influenced by lifestyle.
And Cancer Research UK said a healthy lifestyle would still heavily stack the odds in a person’s favour.

So is it time to light-up, drink and eat what you want without a care in the world?
It won’t come as a surprise that the answer is no.
All cancer has an element of chance – a roll of the dice that decides whether your DNA acquires a mutation that leads to cancer.
The study shows that two thirds of cancer types are simply chance.
But the remaining third are still heavily influenced by the choices we make.
Too much booze, time in the sun or being overweight mean we are playing with loaded dice and the odds are not in our favour.
Remember smoking accounts for a fifth of all cancers worldwide.
These findings are a reminder that cancer is often just bad luck and the only option is early detection.
But that’s not an excuse to give up on those new year’s resolutions already.

In the US, 6.9% of people develop lung cancer, 0.6% brain cancer and 0.00072% get tumours in their laryngeal (voice box) cartilage at some point in their lifetime.
Toxins from cigarette smoke could explain why lung cancer is more common.
But the digestive system is exposed to more environmental toxins than the brain, yet brain tumours are three times as common as those in the small intestine.

The team at Johns Hopkins University School of Medicine and Bloomberg School of Public Health believe the way tissues regenerate is the answer.
Old tired cells in the body are constantly being replaced with new ones made by dividing stem cells.
But with each division comes the risk of a dangerous mutation that moves the stem cell one step closer to being cancerous.
The pace of turnover varies throughout the body with rapid turnover in the lining of the gut and a slower pace in the brain.

The researchers compared how often stem cells divided in 31 tissues in the body over a lifetime with the odds of a cancer in those tissues.
They concluded that two thirds of cancer types were “due to bad luck” from dividing stem cells picking up mutations that could not be prevented.
These cancer types included Glioblastoma (brain cancers), small intestine cancers and pancreatic cancers.
Cristian Tomasetti, an assistant professor of oncology and one of the researchers, said a focus on prevention would not prevent such cancers.
“If two thirds of cancer incidence across tissues is explained by random DNA mutations that occur when stem cells divide, then changing our lifestyle and habits will be a huge help in preventing certain cancers, but this may not be as effective for a variety of others.
“We should focus more resources on finding ways to detect such cancers at early, curable stages.”

Knighthoods for "father of Viagra"