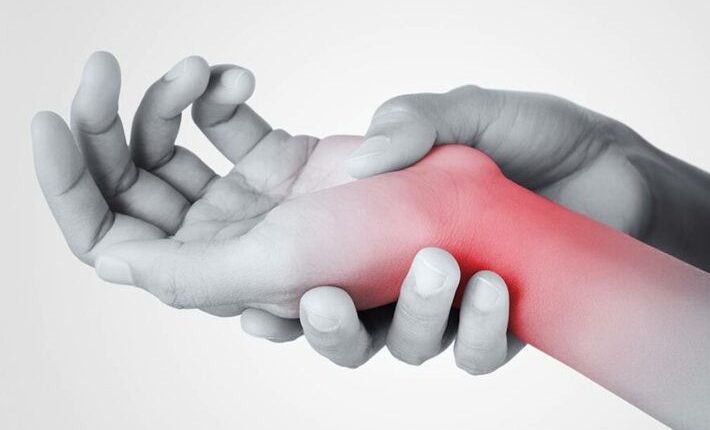 Carpal tunnel syndrome predominantly affects women between the ages of 40 and 60. The causes of this disease are manifold

Although there is an individual predisposition, the onset of carpal tunnel syndrome is mainly seen in people who do heavy and/or repetitive manual work

It is also frequently observed in women during and just after pregnancy, or appears with menopause.

The real cause of CTS is increased pressure on the median nerve in the carpal canal, supported by several factors, the most important of which is inflammation of the transverse carpal ligament or increased volume (hypertrophy) of the nerve and neighbouring tendons.

As the carpal tunnel is an anatomical structure with rigid walls, a “conflict between container and content” is created.

What are the symptoms of carpal tunnel syndrome?

The symptoms of carpal tunnel occur mainly in the initial phase, during the night, with the appearance of a strange tingling sensation in the first four fingers of the hand, without ever affecting the fifth finger; the tingling sensation then gives way, over time, to a form of stiffness and swelling of the fingers of the hand (especially in the morning) with burning and a progressive and increasingly evident loss of sensitivity and grip of the hand.

The patient is no longer able to pick up small objects, such as coins or a sewing needle, and it also becomes uncomfortable to hold the telephone receiver, the steering wheel of the car or the handlebars of the bicycle.

Often, ‘shocks’ can also be felt.

In the advanced stages of median nerve pain, it is common to observe hypotrophy of the thumb muscles with the formation of a real “hole”.

What test should be done to be sure of the diagnosis of Carpal Tunnel Syndrome?

For absolute diagnostic certainty, an electromyographic examination should be performed, which serves to highlight the slowing of the median nerve conduction velocity.

Once carpal tunnel syndrome has been diagnosed, what treatment should be followed?

The treatment of the initial forms involves the use of a wrist brace for the night, anti-inflammatory and neurotrophic drugs and physiokinesitherapy.

Some also perform corticosteroid infiltrations, which I personally do not do because of possible complications.

When these procedures no longer give the desired benefit, surgical treatment must necessarily be proposed.

Electromyography (EMG), What It Assesses And When It Is Done

Tinnitus: the causes and tests for diagnosis