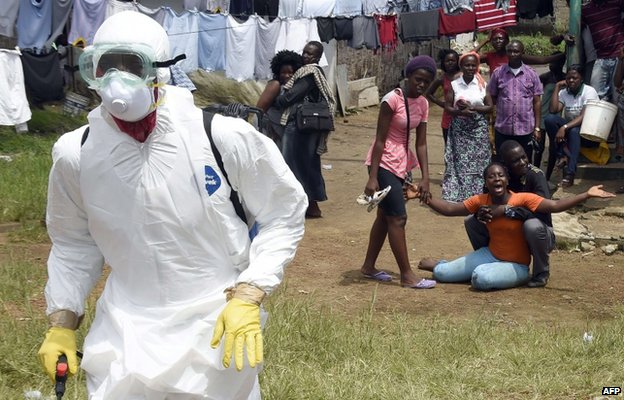 US President Barack Obama has renewed calls for Congress to approve $6bn (£3.8bn) in emergency aid to fight the deadly Ebola outbreak in West Africa.
The president made the plea on a visit to the National Institutes of Health, where he congratulated scientists on work towards a vaccine.
The WHO says 6,055 people have died in Liberia, Sierra Leone and Guinea.
The medical charity, Medecins Sans Frontieres (MSF), has again strongly criticised the international response.
It described it as patchy and slow, with the job of tackling the crisis largely left to doctors, nurses and charity organisations.
The MSF report said foreign governments – notably the UK in Sierra Leone and most recently China in Liberia – were continuing to build Ebola treatment centres.
But these were sometimes in the wrong places and using under-qualified local staff.
“It is extremely disappointing that states with biological-disaster response capacities have chosen not to deploy them,” Dr Joanne Liu, MSF’s International President, said in a statement.
Earlier on Tuesday, the International Federation of Red Cross and Red Crescent Societies (IFRC) said stigma against travellers from Ebola-infected countries was hindering the fight against the disease by discouraging Western medics from helping.

Top UN Ebola bosses gave an upbeat press conference in Freetown, Sierra Leone, on Monday that contrasted sharply with the new MSF report. The UN had met some of its targets, the bosses said – the situation was very bad, but moving in the right direction.
However, privately, UN officials say the country that currently has the worst Ebola hotspots, Sierra Leone, is not coping at all.
These UN officials added – still “off the record” – that the big aid agencies, the government of Sierra Leone and the British army were not “joining the dots” and co-ordinating well. It was of course ironic for UN officials to say that, because the UN is supposed to be doing the co-ordination.
The UN, for all its bureaucratic faults, is the only overarching international body that can hope to manage the fight against Ebola in the long run. But MSF medics and Sierra Leonean health workers have, so far, done most of the dangerous work in the front lines against the viral disease.

President Obama said the strategy to fight Ebola was “beginning to show results”.
“We’re seeing some progress, but the fight is not even close to being over,” he said.
“Every hotspot is an ember that if not contained can become a new fire, so we cannot let down our guard even for a minute. And we can’t just fight this epidemic, we have to extinguish it.”
He said it was encouraging to see declining infection rates in Liberia and called progress in vaccine research “exciting”.
He urged Congress to give a “good Christmas present” to the world by approving $6bn in emergency funding.
Congress is at work on a massive spending bill, but Ebola legislation has become embroiled in political partisanship.

Conservative members of Congress are expected to challenge Mr Obama’s appeal for funds in response to the president’s recent controversial executive actions on immigration, helping more than four million illegal immigrants.
Meanwhile, the White House said that the US was better prepared to deal with an outbreak of Ebola at home, and efforts to battle it in West Africa were progressing.
A network of 35 hospitals across the US are ready to treat Ebola patients and the number of labs used for testing the virus has increased from 13 to 42.
Nearly 200 civilians and 3,000 military personnel have also been deployed to West Africa, and three Ebola treatment units and a hospital have been set up in Liberia.