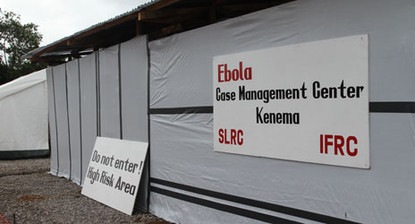 In some parts of western Africa, Ebola treatment centers (ETCs) have reached capacity. Unless capacity is rapidly scaled up, the chance to avoid a generalized Ebola epidemic will soon diminish. The World Health Organization and partners are considering additional Ebola patient care options, including community care centers (CCCs), small, lightly staffed units that could be used to isolate patients outside the home and get them into care sooner than otherwise possible. Using a transmission model, we evaluated the benefits and risks of introducing CCCs into Sierra Leone’s Western Area, where most ETCs are at capacity. We found that use of CCCs could lead to a decline in cases, even if virus transmission occurs between CCC patients and the community. However, to prevent CCC amplification of the epidemic, the risk of Ebola virus–negative persons being exposed to virus within CCCs would have to be offset by a reduction in community transmission resulting from CCC use.

The current epidemic of Ebola virus disease in western Africa has resulted in thousands of cases during 2014 (1). To date, Ebola treatment centers (ETCs) have been used to isolate patients and provide clinical care. These facilities typically have large capacity (some have >100 beds) and function under high levels of infection control. However, in Sierra Leone, ETCs have reached capacity, and patients are being turned away (1). The reproduction number (defined as the average number of secondary cases generated by a typical infectious person) has been >1 in Sierra Leone,

leading to growth in the number of cases reported each week (2–4). As a result, there is an urgent need to rapidly scale up treatment and isolation facilities. Delays in implementation will result in falling further behind the epidemic curve and in an even greater need for patient care facilities. ETCs are complex facilities that require a substantial number of staff and time to set up; thus, the World Health Organization and other partners are looking at additional care options to supplement existing ETCs. One approach is the use of Ebola community care centers (CCCs), which would represent a possible change in operational approach (5–7). As envisioned in the World Health Organization approach, CCCs would be small units with 3–5 beds and would be staffed by a small group of health care workers. The main objective would be to isolate patients outside the home and, hence, reduce the movement and contacts of infectious persons within the community. CCCs are designed to engage the community and to increase the acceptance of isolation. Care for patients in CCCs would be provided primarily by a caregiver who would be given personal protective equipment (PPE) and basic patient care training. Patients would be free to leave the unit while awaiting test results. The specific utilization of CCCs would vary, depending on local context, and units would form part of a package of interventions, including monitoring of community contacts and burials within the community.

Nocturnal enuresis in children: when and why do children pee in bed?

TIPS - Transjugular porto-systemic shunt: what it is, how it works and when it is…

Gastroenteritis: what is it and how is rotavirus infection contracted?