This is a contribute from Dott. Guido Parodi published on medEST118.com blog:

Guido is a good friend of MEDEST and an exceptional interventional cardiologist working at Careggi Hospital in Florence. The passion for medical research made Guido one of the lead investigators in many studies about antiplatelets therapies in acute coronary syndromes. His enthusiastic way to work and to talk about the things he does is contagious. So we had this wonderful connection from the first time we met many years ago. In this post he talks about a brilliant intuition he had, on the possible drug-to-drug interaction between morphine and antiplatelets agents. So let’s go to the post.

Antiplatelet agents are the mainstay of pharmacological treatment in patients presenting with an acute coronary syndrome, including STEMI. Currently, new strategies are under investigation to improve antithrombotic treatment in patients with ST-elevation myocardial infarction (STEMI) patients treated with primary percutaneous coronary intervention (PPCI). Prasugrel and Ticagrelor, the newer, potent, fast and effective platelet P2Y12 receptor inhibitors, are recommended for STEMI patients in the European Guidelines (1) with the highest level of recommendation (I) and evidence (A). 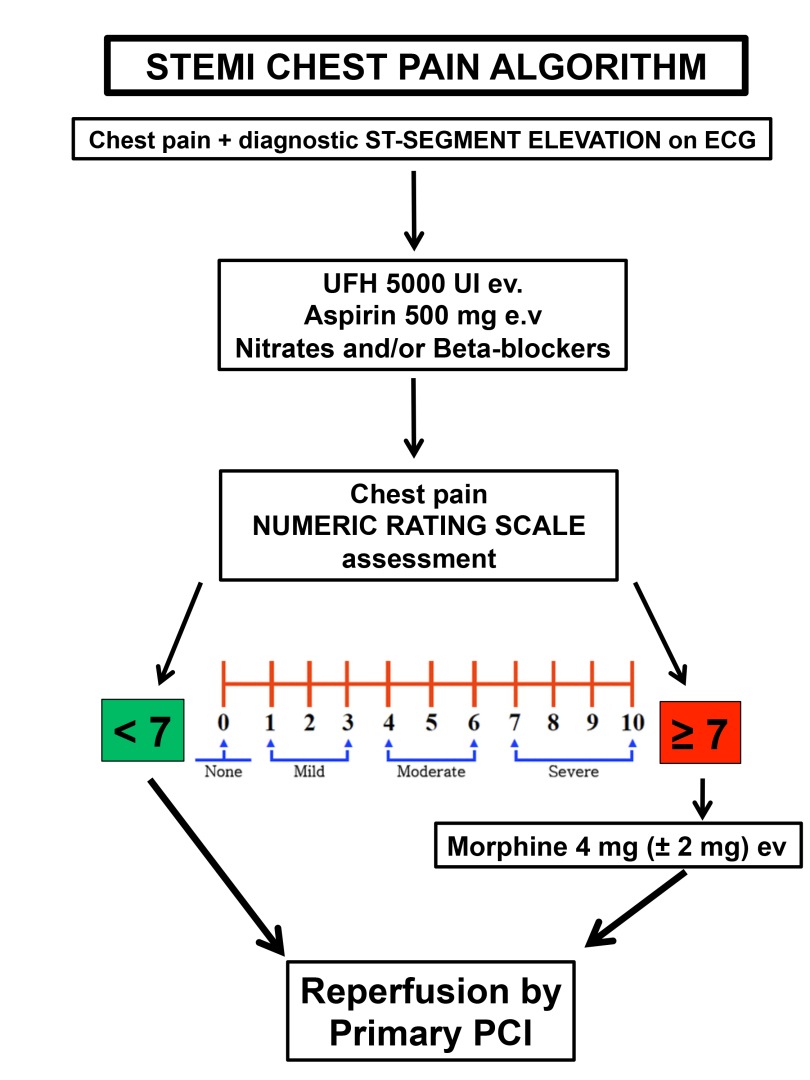 In patients with STEMI undergoing PPCI a significant number of drugs are usually administered, thereby raising the potential risk for drug-to-drug interaction. In a recent small randomized study aimed to investigate the onset time of the novel P2Y12 receptor inhibitors (i.e., prasugrel and ticagrelor) in STEMI, a delayed antiplatelet effect due to morphine use in the first hours of STEMI has been hypothesized (2). This study showed that residual platelet reactivity soon after a loading dose of prasugrel and ticagrelor in patients with STEMI is higher than that reported for healthy volunteers or subjects with stable coronary artery disease and the majority of PPCI procedures with stent implantation are performed without proper platelet inhibition. A several hours vulnerable window of suboptimal antithrombotic therapy exists, in which STEMI patients are at high risk of thrombotic events, including stent thrombosis. Moreover, in this study morphine use resulted to be associated with a delayed activity of the new oral antiplatelet agents. There may be a biologically plausible cause-effect-relation in this association, given that morphine inhibits gastric emptying, thereby delaying absorption and possibly resulting in decreased peak plasma levels of orally administered drugs. Recently, an international multicentre randomized study, the ATLANTIC trial (3), showed that the pre-hospital administration of the potent platelet P2Y12-receptor antagonist ticagrelor shortly before PPCI in patients with STEMI appeared to be safe but did not improve reperfusion of the culprit artery. Interestingly, the ATLANTIC trial showed that the primary end point of ST-segment resolution was significantly improved with pre-hospital administration of ticagrelor in patients not receiving morphine (P = 0.005) for interaction supporting the hypothesis of a drug-to-drug interaction between morphine and oral antiplatelet agents.

Given the key importance of platelet inhibition in patients treated by PPCI for STEMI and the absence of data that may support a potential clinical benefit of morphine in patients with acute myocardial infarction, more caution should be used regarding morphine administration in STEMI patients, and a restricted morphine use seems to be reasonably recommended.