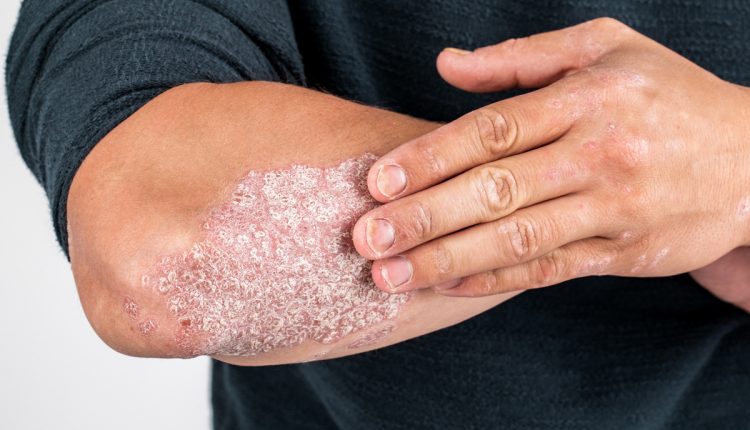 Psoriasis is a skin disorder caused by an exaggerated and abnormal growth of the epidermis, the outermost layer of the skin

In recent years, thanks to research and technology, treatment has become much more effective and the patient’s life has improved considerably.

It is a frequent disease and in Italy about 2.6 % of the population suffers from psoriasis.

It is a chronic and relapsing inflammatory skin disease characterised by a spontaneous ‘see-saw’ pattern: there are times when the situation improves and others when it flares up (relapses).

What are the causes of psoriasis?

The causes that lead to an increase in the proliferation of keratinocytes, the cells that form the epidermis, and the inflammatory process in the dermis are not yet known, but it is assumed to be on a genetic basis and therefore, in predisposed individuals, certain triggering factors such as anxiety and nervousness, infections (in particular tonsillitis caused by Streptococcus beta-hemolyticus), local trauma (old wounds or scars), the use of certain medications, obesity or cigarette smoke can all promote the onset of the disease.

How does it manifest itself?

In its most common form, psoriasis results in the formation of round or oval, red lesions that are often covered with compact, silver-coloured scales and tend to come off easily.

They can occur all over the body, including the nails. In general, however, there are areas that are more affected, such as the scalp, elbows, knees and lower back.

It is associated with itching, patients are often prone to scratching and the psoriatic lesions worsen.

We can say that there is a greater predisposition if there is a family history.

If one’s parents, or possibly family members, have the disease, there is a greater likelihood that the disease will also manifest itself in children and close relatives.

For example, if both parents suffer from psoriasis, the child has a 41% chance of developing the disease.

However, it is not always easy to trace the family history of psoriasis, especially in cases of mild psoriasis, early deaths from accidents or war, or relatives who lived before 1900.

Can it also affect children?

It is a disease that can occur at any age, from infants to the elderly.

In infants it is often confused with nappy dermatitis.

For this reason, it is important to seek advice from a dermatologist when normal ointments do not resolve the problem.

Can people with psoriasis go swimming and sunbathing?

There are no contraindications, and sun exposure has been associated with an improvement in the disease.

Psoriatic patients, on the other hand, prefer not to expose themselves in public, so although sunbathing, swimming in the sea, or going to the pool is not discouraged, they are generally not appreciated by patients.

Much depends on the extent of the lesions and the area affected.

And often the involvement of the hands and feet and the widespread nature of the disease have a significant impact on people’s quality of life, with a reduction in motor skills and difficulty in performing simple activities.

How is psoriasis diagnosed?

Psoriasis is diagnosed by a dermatological examination.

In some situations, a biopsy may be necessary to perform a histological examination of the tissue and confirm the type of lesion.

How is it treated?

Psoriasis is a disease that occurs mainly in the skin, but is in fact a systemic disease in which other organs are involved.

In particular, there are two categories: traditional drugs that have been used for many years (methotrexate, cyclosporine and acitretin), which are used for limited periods, and new-generation drugs, known as biological drugs because they contain specific antibodies that act against inflammation.