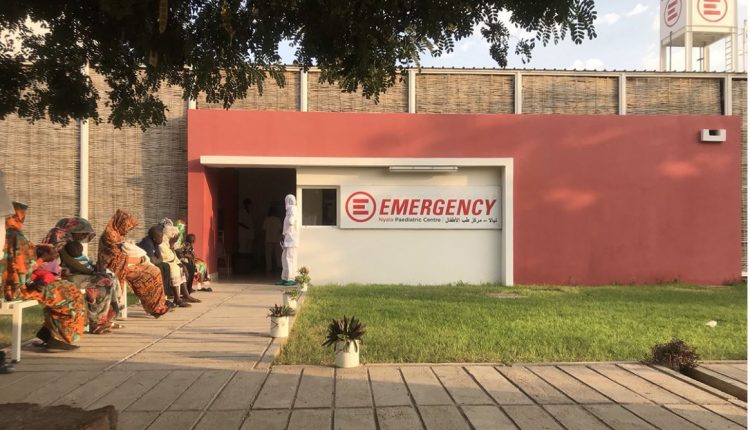 Emergency in Darfur (Sudan): “Restarting was important; we treat children up to 14 years of age in a key area: Nyala is not only the capital of South Darfur but also the second largest city in Sudan, with a population of over one and a half million people”.

The situation in Darfur (Sudan): to talk about it is Diana Debono, 37 years old, Maltese, already working with Emergency in conflict-affected areas such as Afghanistan and Sierra Leone.

The telephone appointment is postponed several times because, as “medical coordinator”, she is engaged on several fronts, from the fight against malaria to that against respiratory infections, from vaccinations to anti-malnutrition screening.

Debono works in the Paediatric Centre that the Italian NGO reopened in Nyala in November, after ten years of closure, following the kidnapping of a cooperator and linked to new security risks.

The reopening was made possible thanks to the Italian Agency for Development Cooperation (AICS), which entirely financed the reopening, allowing the rehabilitation and the start of activities, with a contribution recognised for its value by the Government of Sudan.

“In the State of South Darfur, the data in the field of paediatric health are among the most critical,” says Debono.

“The infant mortality rate for children under five is over 70 per cent and about 820,000 children of that age have no access to health services, including emergency services.

At the Centre, which is equipped with paediatric and cardiology outpatient clinics, a radiology room and an analysis laboratory, there were inevitable problems and uncertainties, especially in the initial phase.

“With 18 beds available on the ward, we could only use five because of the difficulties in finding doctors locally,” Debono recalls.

Darfur has been hit by armed conflict since 2003, often pitting black communities against Arab militias, resulting in thousands of deaths and more than two million displaced people.

New violence still forced 100,000 people to leave their homes at the beginning of this year, despite an agreement signed in October between the government of Sudan, the Justice and Equality Movement (JEM) and other rebel groups.

A further element, a sign of hope but also of a transition full of unknowns, is the withdrawal of a UN and African Union peacekeeping mission, due to be completed in June.

Luca Rolla, Emergency’s representative in Sudan, confirms that the reopening of the Paediatric Centre in Nyala is “a positive sign”: “We serve all the patients in Darfur who have been operated on in our Salam Centre, in the capital Khartoum, and who need to be checked for anticoagulant therapies, free supplies of medicines and cardiological checks”.

According to the cooperator, “now these people can receive basic care services without having to fly to Khartoum but reaching Nyala once a month with one or at most two hours by bus”.

In Darfur, the Italian Agency for Development Cooperation has also taken over a health capacity building programme.

“There will also be forms of public-private partnership”, emphasises Vincenzo Racalbuto, head of the AICS office in Khartoum: “The aim is to ensure the sustainability of the services”.

A specific commitment on the part of the Sudanese government and also of international cooperation and NGOs concerns the fight against Covid-19.

A few weeks ago, the first supplies of vaccines produced by the multinational Astrazeneca were delivered to Sudan.

“As Emergency we are ready to offer support to the Ministry of Health,” says Rolla.

“Both at the Salam Centre in Nyala and at our other hospital in Port Sudan, on the Red Sea, we have been involved for the lists of medical personnel and for the procedures necessary for the campaign”.

According to Rolla, beyond the cases of the new coronavirus, the impact that the pandemic may have on a health system that is ‘still fragile’ is a cause for concern.

For some time Sudan has been tested by an economic crisis, with multi-figure inflation, only partly a consequence of the loss of oil wells in the south that became independent from Khartoum in 2011.

“From November to February, prices rose by 300 per cent,” says Emergency’s representative.

“Many citizens are struggling: to buy bread there are queues that can last for hours”.

Almost two years after the popular revolution that led to the intervention of the army and the ousting of President Omar Al-Bashir, in power since 1989 and now indicted by the International Criminal Court for war crimes and genocide allegedly committed in Darfur, the new tensions have not resulted in less security.

In Emergency’s view, it is the trust in the transitional institutions that has contributed, as well as the credit acquired by the NGO thanks to the work carried out, which is recognised both by the government and by Sudanese citizens.

“They know that we give an important hand to the health system, be it hospitals or paediatric centres,” says Rolla, “That is why we are always warmly welcomed.

The latest news, which arrived on the last Sunday of March, is the signing of a peace agreement by the government with the Sudan-North Popular Liberation Movement, a rebel group rooted in the border regions of the Nuba Mountains and Blue Nile.

The text, the result of months of negotiations, states a commitment to respect the country’s “ethnic, cultural and religious diversity”.

Emergency Expo By Roberts Is Coming: April The 9th Marks The Start Of The First Virtual Exhibition For The Emergency And Rescue Sector

Covid-19 Emergency In Pakistan: The Future Lies With The Vaccine

Migration Crisis, Flood And Epidemics Put Acre (Brazil) In A State Of Emergency