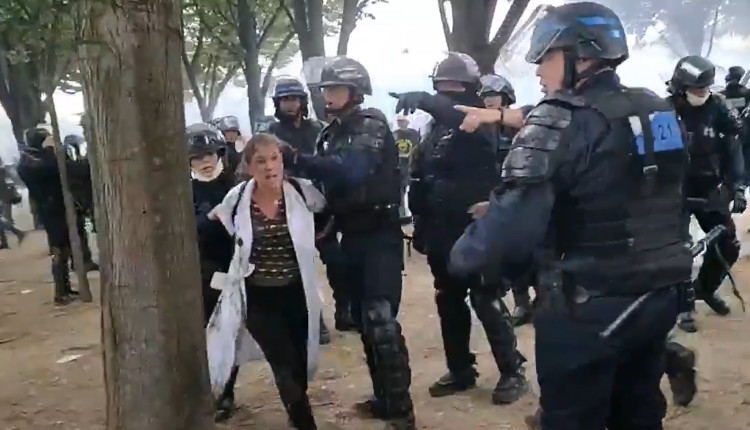 Paris saw an important protest march of healthcare workers on Tuesday, 16 June, who pacifically protested on their pay. But a group of violent people among them started to assault police, who responded with military actions. Amid the ‘bagarre’, a video on a nurse violently arrested got viral on socials.

Payment is an important aspect of healthcare workers dignity, especially after the peak of the pandemic that France registered. On Tuesday 16, around 18,000 healthcare workers protested in Paris and in other main cities of France, with a pacific march authorized by French authorities. However, when the pacific protest reached Les Invalides monument, a group of violent people started to assault police by throwing stones and Police responded by firing tear gas and more than a dozen people were arrested. The situation is still not clear.

Healthcare workers protest in France, what are they marching for?

Tens of thousands of doctors, nurses and healthcare workers, after more than 3 months of the health crisis due to COVID-19, walked along the streets of French cities in white uniforms to ask the Government to keep its promises for overhauling the hospital system in response to the coronavirus crisis. As reported on France24, France had nearly 30,000 coronavirus-related deaths, the fifth-highest pandemic death toll worldwide, and the country’s hospitals have treated more than 100,000 people with the virus.

How did this pacific protest turn out to violence?

Police and healthcare workers affirm – according to ActuParis, too – those violent people allegedly were Black Block and Yellow Jackets who sneaked in the mass and take advantage of the protest to assault police. On the other hand, a video on a nurse violently arrested is getting viral on socials. An emergency department doctor in Paris tweeted that healthcare workers are not violent and that other groups started to provoke the police and set cars on fire (check the tweet out at the end of the article).

On 16 June afternoon, around 4 pm, the police were fighting against 400 to 500 “thugs”, meanwhile, healthcare workers continue their movement calmly. However, the images of Farida, a nurse from Val-de-Marne who came to demonstrate in Paris, violently arrested are raising much disappointment among the medical community.

Many protesters allegedly have been filmed while throwing stones and projectiles. Among them, according to the police, there also was Farida, in a white uniform. The video shows clearly Farida, dragged to the ground, pulled by the hair, then subdued under the weight of some policemen.

Farida’s daughter tweeted an indignation post on police behaviour. Many tweets to Farida’s daughter showed much solidarity. However, at the moment, no authority issued some kind of declaration on this specific event.