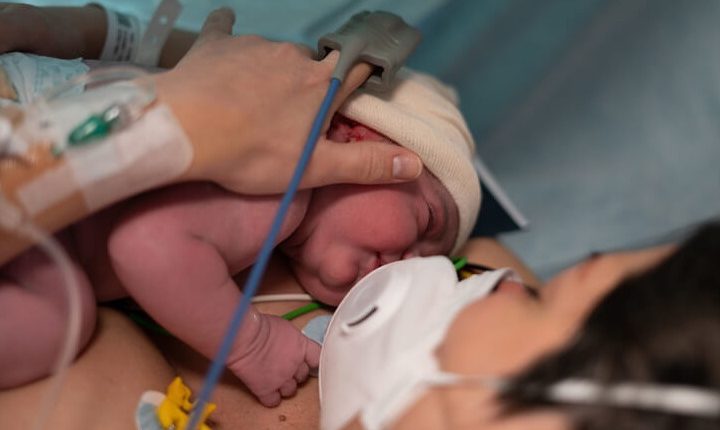 COVID-19 and pregnancy, a new study on 1,471 women and newborns from the University of Pennsylvania

COVID-19 and pregnancy, a correlation watched with the right degree of attention since the onset of the pandemic

Well, from the United States a further study with rather reassuring results.

COVID-19 and pregnancy, the University of Pennsylvania study

Antibodies to the SARS-CoV-2 coronavirus in the blood of pregnant women cross the placenta efficiently and are were found at similar concentrations in the blood of their newborns, according to a large study from researchers at the Perelman School of Medicine at the University of Pennsylvania.

The findings, reported JAMA Pediatrics, suggest that mothers who have had COVID-19, or asymptomatic exposure to the coronavirus, can, through this antibody transfer, provide some protection against the virus to their newborns.

The authors hypothesize that this may have implications for COVID-19 vaccines.

The study on 1,471 pregnant and COVID-19 positive women

The researchers tested blood samples from 1,471 women and their newborns for the presence of antibodies to SARS-CoV-2, and observed that 83 of the women had significant levels of SARS-CoV-2-specific antibodies.

The vast majority (87 percent) of the newborn babies of these women also had significant levels of SARS-CoV-2-specific antibodies in samples of umbilical cord blood drawn at birth.

The study found no evidence that the antibodies were due to fetal infection, indicating that it is likely the antibodies crossed the placenta from the mother’s blood to the fetal circulation.

Transfer of COVID-19 antibodies in pregnancy ‘appears to be pretty efficient’.

“This transfer appears to be pretty efficient,” said study co-senior author Karen Puopolo, MD, PhD, a neonatologist at Children’s Hospital of Philadelphia, an associate professor of Pediatrics at the University of Pennsylvania Perelman School of Medicine and Chief of the Section on Newborn Medicine at Pennsylvania Hospital.

“In some of the cases, the newborn’s blood concentration of SARS-CoV-2 antibodies was even higher than the mother’s.”

“In general, our findings are consistent with what we know about cross-placental transfer of antibodies to other viruses, and should contribute to the discussion about whether and when to vaccinate pregnant women against SARS-CoV-2,” said co-senior author Scott Hensley, PhD, an associate professor of Microbiology at Penn Medicine and a member of the Penn Institute for Immunology.

Prior, smaller studies also have found evidence that maternal antibodies can cross the placenta to the fetal bloodstream. However, the dynamics and the efficiency of this transfer have been unclear.

Puopolo and Hensley and their colleagues used a previously validated blood test kit to check for SARS-CoV-2-specific antibodies in blood serum samples collected at the time of delivery during a four-month period from April to August of last year at Pennsylvania Hospital in Philadelphia.

The study in all covered 1,471 mother-and-child pairs of samples.

The role of immunoglobulins in fetal protection:

The researchers found that the most common class of antibodies in the blood, known as immunoglobulin G (IgG) antibodies, appeared to transfer readily from the mother’s blood across the placenta.

IgG anti-SARS-CoV-2 levels detected in the newborns closely tracked levels in their mothers.

However, a class of larger antibodies, known as IgM antibodies, which tend to be produced earlier in an infection and are not known to cross the placenta, were not detected in any cord blood sample.

Since infants have some ability to produce their own IgM antibodies, the absence of these antibodies also suggested that the SARS-CoV-2 virus itself had not crossed the placenta and infected them.

Among the mothers who had anti-SARS-CoV-2 antibodies but their infants didn’t, 5 had only IgM antibodies, which would not have been expected to cross the placenta.

The transport of IgG antibodies across the placenta is known to occur especially in the third trimester of pregnancy, and as more time passes, more antibodies cross.

Scientists also know that an infection with a novel virus can take time to elicit a significant antibody response.

The results from Hensley, Puopolo and their colleagues were consistent with these known patterns: placental transfer was greater the longer the time elapsed between maternal COVID-19 infection and delivery.

Birth And COVID-19, What Is The Task Of Midwives In Contexts Of Concern And Tension? Some Useful Advice From Argentina

Perelman School of Medicine at the University of Pennsylvania official website

Malawi is overwhelmed by second wave of COVID-19

Patient and rescuer safety, with 10G Sharp Sensor Lock from Spencer no risks in the ambulance