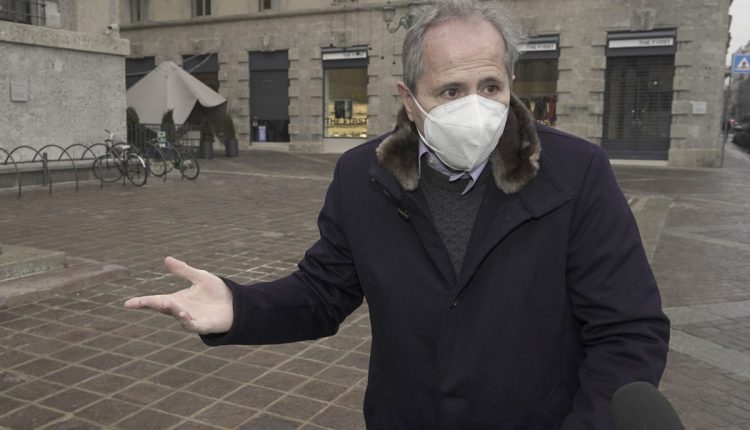 Covid, are the statistics true in Italy? According to virologist Crisanti, the death figures are contradictory to the number of infected people, which he says are currently between 15 and 20 thousand a day in Italy

“The protests we witnessed on Saturday bear witness to the impatience that has been achieved, an impatience that is also the result of contradictory messages and approaches to the pandemic,” he told Radio Maria Crisanti.

Andrea Crisanti, director of the Department of Molecular Microbiology at the University of Padua, told Radio24.

For Crisanti, the contradictions start with the numbers: ‘Today in Italy we have 30-40 deaths a day from Covid and 2-3,000 new cases, a ridiculous number of infections,’ the virologist points out.

‘Obviously there is an unjustifiable discrepancy because in all the other countries in Europe, and in general in the world, there is a ratio of 1 to 1,000 between the number of deaths and the number of cases.

In England, for example, they have 150 deaths a day and about 30,000 new cases and they think they underestimate them by at least half. Generally speaking, you have to divide by 2 and multiply by 1,000, so at the moment in Italy we should have between 15,000 and 20,000 infected people a day.

It is not clear, however, why the numbers are much lower. This is an Italian anomaly.

Either we’re not testing enough, or we’re not registering cases, or people are testing themselves and not self-reporting, there’s definitely something wrong,” says the virologist.

“The problem is that these discrepancies make people think that the pandemic is over when in fact it is not,’ Crisanti points out.

The same applies to the green pass. “It is another anomaly,” says the director of the Microbiology department, “because after 6 months the duration of the vaccine, as far as infection is concerned, drops from 95% to 40%.

So extending the validity of the green pass from 6 months to 1 year has nothing scientific about it,” Crisanti stresses.

“The green pass is a measure to induce the population to get vaccinated and, in fact, we have reached important levels of vaccination, but to have an impact on transmission it should be issued to people who have had the second dose of vaccine within 6 months or to those who have had a swab, after 24 hours.

For the virologist, ‘these contradictions are perceived by people who are against the green pass and open a door for protests,’ he concludes.

“SURVEILLANCE AND NO QUARANTINE IS A PRAGMATIC APPROACH

According to Crisanti, avoiding quarantine for the whole class when there is only one positive case and monitoring the infections with tests ‘is a pragmatic approach.

If there is a positive case in the class it would be appropriate to do a molecular swab of all the classmates and then do it again after three days.

If you then start doing antigenic tests, which have a lower sensitivity, then the approach becomes less effective, but let’s say that in the case of the school even antigenic tests could be justified’.

In conclusion, the director of the Department of Molecular Microbiology at the University of Padua emphasises: ‘I have always maintained that quarantines of 14 days or even 10 days were not justified if there were the means to carry out screening’.

According to the new indications of the Istituto Superiore di Sanità, the Ministries of Health and Education and the Regions, updated on 7 October, the isolation of the entire class is envisaged if there are two or more positives.

What is a tumour and how it forms