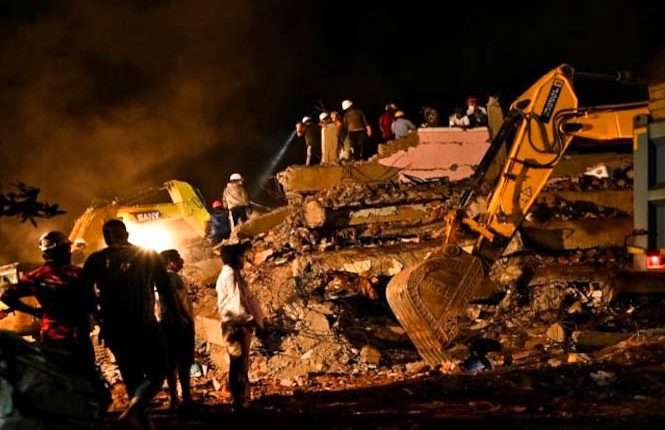 Rescuers at work for hours, in India: a residential building in Mahad has collapsed, killing (for now) one person.

Rescuers are still at work: extracted 60 people alive. The collapse occurred Monday night, local time zone, and rescuers were immediately activated: Nidhi Chaudhari, senior official of the Mahad area, near Mumbai, in the central state of Maharashtra, said that rescuers are still searching for more than 20 people, who are believed to be trapped under the rubble of the five-storey building.

“Dozens of rescuers from the National Disaster Relief Force,” says The New Daily, “worked through the night with tools to leverage the debris. Some of the seriously injured were hospitalized”.

The authorities have yet to ascertain the cause of the collapse. Nidhi Chaudhari said that an investigation has already been launched.

Building collapse in India, video of rescue workers at work

A video shared on social media last Monday showed a group of men atop the collapsed building removing debris by hand while dozens of spectators watched.

In another one, a little girl was pulled out and put on a stretcher.

#WATCH: A 4-year-old boy was rescued from under the debris at the site of building collapse in Mahad, Raigad. #Maharashtra pic.twitter.com/polMUhzmqN

Building collapses are unfortunately common in India during the June-September monsoon season when heavy rains weaken the foundations of poorly constructed structures.

The hope now is that the happy outcome of the relief efforts will continue, mitigating as much as possible the damage to the health of those involved in the disastrous collapse.

Serious Airplane Crash in India, the aircraft was…