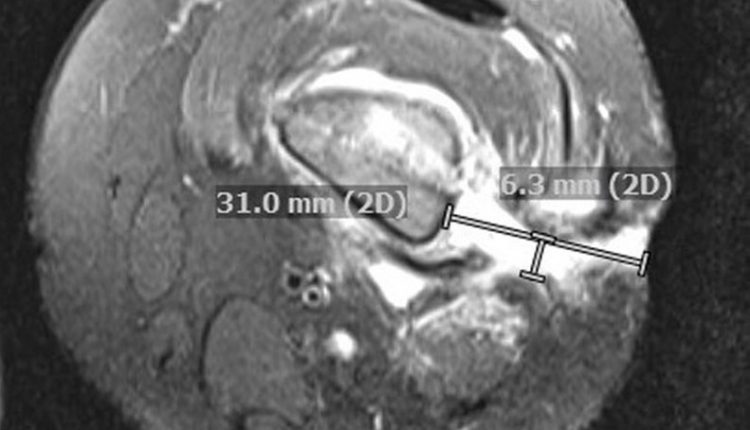 Persistent Leg drainage in a paediatric trauma patient: a 7-year-old male with a past medical history of asthma sustained multiple injuries in a motor vehicle accident including a left hip dislocation, left femur fracture, left radial fracture, a comminuted fracture of the lateral wall of the right orbit, a right retrobulbar hemorrhage and a non-displaced fracture of the posterior wall of the right maxillary sinus

Drainage in a paediatric trauma patient, presentation of the case report

He was initially lost to follow-up until a visiting nurse, caring for his mother, noted that his left femur wound was draining.

At his orthopedic visit 4 months after his accident, his physical examination was significant for a purulent collection at one of his incisions on the left lateral thigh.

The rest of his physical examination was normal, and he was admitted to the hospital for further workup.

The purulent collection was aspirated and was ultimately culture negative.

A radiograph of the left femur showed exuberant callus at the fracture sites.

He was taken to the operating room (OR) the following day where 2 areas of pus within the most distal incision and a sinus tract tracking behind the femur and onto the previously placed metal plate were identified.

The area was washed out, the hardware was removed, and he was started empirically on oxacillin.

Aerobic and Anaerobic bacterial cultures were negative except for 2 different isolates of coagulase-negative staphylococcus that were not recovered from plates but grew only from the thioglycolate broth after 4 days suggesting low levels of bacteria.

He was switched from oxacillin to vancomycin 15 mg/kg/dose every 8 hours, resulting in an initial trough level of 6.8 μg/mL.

When his spica cast was removed 5 days postoperatively, a new superficial purulent collection in the middle left lateral femur was noted that required another washout.

He was continued on vancomycin, which had been adjusted to 15 mg/kg/dose every 6 hours, to maintain troughs between 15 and 20 μg/mL, with a maximum trough level of 19.6 μg/mL.

Twenty-two days later, the sutures were removed, and again purulent drainage was found at the lower and mid incision sites of the left lateral thigh

Cultures taken during the third incision and drainage in the OR revealed the diagnosis.

One hundred fifty-two days following the initial traumatic MVA, the patient was taken for a third incision and drainage where pus was found at the original incision sites and under the iliotibial band and portions of the vastus lateralis that required debridement.

Several bone biopsies and cultures of purulent fluid from the bone were collected for staining and culture.

Stains were negative for bacterial, fungal, and acid-fast bacilli organisms.

One of 3 cultures of the pus grew 3 colony-forming units of Clostridioides difficile after anaerobic incubation for 3 days.

Bacterial, fungal and acid-fast bacilli cultures of the bone remained sterile, and a molecular test for non-tuberculosis mycobacteria was negative.

Repeat MRI 7 days later, revealed an increased non-enhancing region within the distal femoral marrow concerning for necrotic versus purulent material, which communicated with a fluid-enhancing tract toward the skin and a sequestered cortical bone fragment in the mid to distal femur.

Back in the OR, a sinus tract in the distal aspect of the superior incision was debrided, and pus was noted to be tracking down to a subperiosteal abscess.

Empiric metronidazole was started due to the previous positive culture for C. difficile, and vancomycin was continued.

He completed 3 weeks of IV metronidazole therapy and was transitioned to oral therapy 188 days following the initial injury.

He remains on oral metronidazole for chronic osteomyelitis.

At his last follow-up visit, his physical examination was significant for no further purulent drainage from the lateral thigh incisions.

He is planned to undergo sequestrum removal with leg-lengthening.

Africa, the Pasteur Institute in Dakar is ready to produce a vaccine 'made in Senegal' in 2022