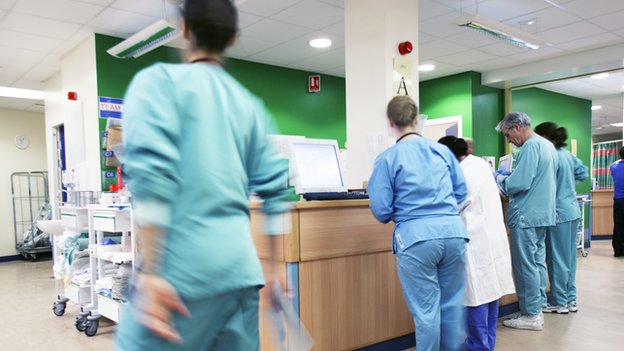 MSPs have questioned whether a key target for Accident and Emergency (A&E) waiting times in Scotland is “reasonable or achievable”.
NHS boards are supposed to see then admit, transfer or discharge 98% of patients attending at A&E units within four hours.
In September the target was met for only 93.5% of patients.
Members of the public audit committee at Holyrood have asked ministers to reconsider the national standard.
The Scottish government said it was continuing efforts to reduce waiting times.
It has also announced an additional £10m to help health boards cope with extra pressure during the winter months and to tackle the issue of delayed discharge.

Clinical need
Figures for the year ending September, showed that an interim annual target for 95% of people to wait no more than four hours from their arrival at A&E was also missed.
The figure achieved across Scotland was 93.4%, no change from when the target was introduced in April 2013.
A report by the committee highlighted that some patients may need to stay in A&E departments for longer than four hours for clinical reasons.
Convener Hugh Henry said: “To have five of the 14 health boards failing to meet the interim 95% target on time is disappointing to say the least, especially when only three NHS boards are meeting the 98% standard set by the Scottish government.

“However, there is always a clinical need to balance speed of care with quality of care and we agree with the AGS (Auditor General Scotland) that waiting times for an A&E department can be an important indicator of pressure on the health system as a whole.
“Against this backdrop, and with the majority of boards failing to meet the set standard, we question whether that standard remains reasonable or achievable.”

Committee members welcomed additional funding of £27m to help health boards address the deterioration in A&E performance.
Their report highlighted the need for accurate information on A&E referrals to tackle the problem of people turning up at A&E departments unnecessarily.

Seasonal pressures
Mr Henry added: “NHS boards need to better understand why people are coming to A&E, when patients could be redirected to other areas of the health service and treated just as effectively.

“Some boards are doing great work in this area and we know the Scottish government is supporting this.
“However, whether other services are available when they are needed, and whether people know enough about the alternatives to attending A&E, needs to be examined further.”

He added: “We have called on the Scottish government to take action to increase understanding in this area and improve the robustness of data collection.
“Only in understanding the problem can more appropriate action be taken to address it.”

A Scottish government spokesman said: “We want to ensure that people are treated as quickly as possible in our A&Es and our unscheduled care action plan has already delivered a significant reduction in patients waiting long periods in A&E, and fewer than 1% of all patients waited longer than 8 hours in the most recent statistics.

“Nevertheless, we will continue to strive to reduce this further and improve the experiences of people attending A&E.
“We have made an additional £10m available to health boards to assist with seasonal pressures over winter and to tackle the key issue of delayed discharge. The Winter Resilience Fund comes on top of an £18.2m investment by the Scottish government to help ease the pressure on Scotland’s NHS over the winter months.”

911 and First Responder rules to interact with Autism sensitivity