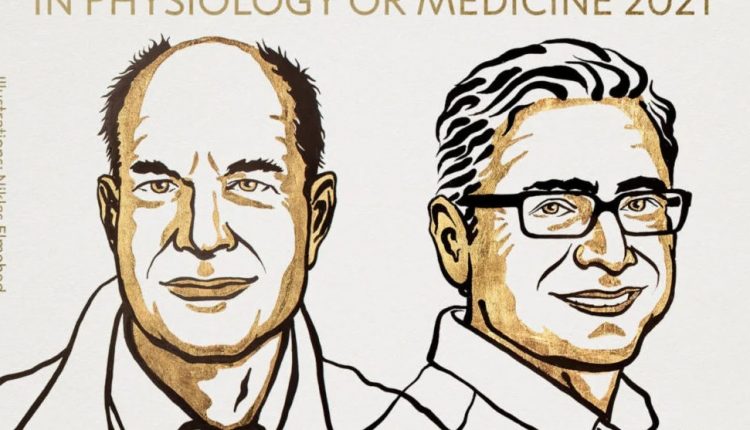 Nobel Prize in Medicine 2021: the two Americans have been awarded for their discoveries on temperature and touch receptors

Americans David Julius and Ardem Patapoutian have been awarded the 2021 Nobel Prize in Medicine by the Karolinska Institute in Stockholm, Sweden

For their discoveries on receptors for temperature and touch’, says the motivation, which have been used to develop treatments for a number of diseases, including chronic pain.

Their findings have also stimulated intense research, leading to a rapidly increasing understanding of how the nervous system perceives heat, cold and mechanical stimuli, as well as identifying important links between our senses and the environment.

To discover a sensor in the nerve endings of the skin that responds to heat, David Julius used capsaicin, a compound in chilli peppers that induces a burning sensation, while Lebanese-born Ardem Patapoutian used pressure-sensitive cells to identify a new class of sensors that respond to mechanical stimuli in the skin and internal organs.

David Julius and Ardem Patapoutian will receive SEK 10 million, or about €986,000.

Since 1901, the year the prizes were first awarded, six Italians have received the prestigious award.

The first Italian doctor to link his name to the history of the Nobel Prize was Camillo Golgi, born in 1843.

Known above all for his studies on the anatomy of nerve endings, he discovered the reticular apparatus inside nerve cells, later renamed the ‘Golgi apparatus’, which earned him the coveted award in 1906. He died in 1926.

Daniel Bovet, a biochemist and Esperanto scientist, was born in Switzerland in 1907.

He obtained a doctorate in Zoology and Comparative Anatomy in Switzerland before moving to France and Italy, where he became a citizen in 1947.

He won the Nobel Prize for his studies in chemotherapy and pharmacology.

During his long career, he was involved in the study of various medical treatments, including those based on sympatholytics, relating to the treatment of blood pressure and states of anxiety.

He is also involved in the study of muscle relaxants and their adjuvant action in surgery. His name is also linked to the discovery of the first antihistamine drug in history, pyrilamine.

Turin is the birthplace of Salvatore Luria, born in 1912, the third Italian to win the Nobel Prize for Medicine.

He was awarded the prize in 1969 for his studies into the multiplication and mutability of viruses.

His research led to the creation of bacterial genetics, molecular biology and virology as independent subjects.

Luria died in the American city of Lexington, Kentucky, in 1991.

Renato Dulbecco was awarded the Nobel Prize in 1975 for his studies on viruses that cause tumours, demonstrating that the genetic material of viruses enters the DNA of cells and becomes part of them.

Born in Catanzaro in 1914, he moved to Liguria and later to Turin.

In Piedmont he studied medicine and graduated with Salvatore Luria and Rita Levi-Montalcini.

Passionate about oncology, Dulbecco was one of the biologists credited with designing the mapping and sequencing of the human genome.

In 1953 he became an American citizen and it was in the United States that he discovered the mechanisms for the self-repair of DNA damaged by radiation and had the merit of isolating the first polio mutant.

He died in 2012 in La Jolla, San Diego County, California.

Rita Levi-Montalcini, a neurologist born in Turin in 1909, was awarded the prize.

Of Jewish origin, the racial laws of the Fascist regime forced her to flee to Belgium.

From Brussels, during the Second World War, with Belgium invaded by Nazi Germany, Rita Levi-Montalcini returned to Turin, but due to the war she moved first to Florence, where she was a doctor for the Allies, and then, in 1947 to Saint Louis.

It was in the United States that she discovered the nerve fibre growth factor, NGF, a protein involved in the innervation processes of the body’s organs and tissues.

Mario Renato Capecchi, a naturalised US geneticist from Verona, born in 1937, is the sixth and last Nobel Prize in Medicine to be won by an Italian.

A biophysics graduate from Harvard in 1967, Capecchi was recognised in 2007 for his contribution to the discovery of gene targeting.

These are techniques that, through the use of embryonic stem cells, make it possible to generate animals characterised by the absence of a specific gene.

These methods are contributing to the study of tumours, neurobiology, immunology and the processes of embryogenesis.

COVID-19, The Rapid Test Gives Results In 5 Minutes: The Berkeley Test Of The Nobel Prize In Chemistry Jennifer Doudna

Breast self-exam: how, when and why