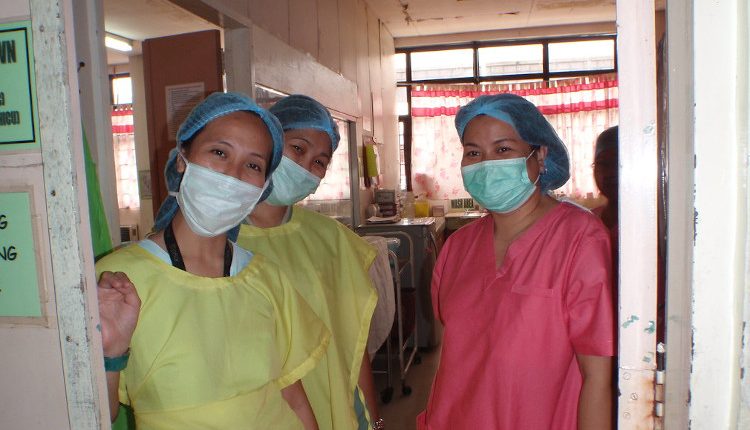 Too few nurses in the Philippines. Is the problem related to the salary?

The UN reports a critical scenario in the Philippines, where there are only 2 nurses per 10,000 people. Now that COVID-19 is dramatically spreading there, we cannot avoid thinking about the reason why there are so few nurses in the Philippines. Maybe we should look at the low salary.

The reason for the lack of nurses in the Philippines could reside in the matter of the bad working conditions, like the low salary.

The UN just issued the latest report on “the Impact of COVID-19 on South-East Asia” and in the document shows a dramatic overview of the health scenario in the Philippines. The country is suffering a lack of nurses and midwives. At the same time, the countries’ healthcare systems are close to being overwhelmed. In a so complex emergency scenario, led by COVID-19, we questioned why there is such a deep lack of professional figures of this kind in the Philippines.

The UN concerned about the nurses overview in the Philippines

Among the 11 countries considered in this brief, the situation is particularly concerning for the Philippines, which have preexisting humanitarian caseloads and have therefore been incorporated in the recently launched Global Humanitarian Response Plan. The UN humanitarian plan aims to help developing countries in fighting COVID-19.

The “pre-existing humanitarian caseloads” refer to the conflicts and disasters that have devastated the country even before the COVID-19 pandemic. In the UN report, the Philippines is the only Southeast Asian country which has two health system indicators in red, which means “very low.” They are nurses and hospital beds.

Two nurses and midwives per 10,000 people is the lowest data among all 11 Southeast Asian countries and creates much concern. Singapore has the highest with 72. Even Myanmar has 10. The Philippines Health Department said occupancy for coronavirus and non-coronavirus beds are now at the “warning zone” nationwide. Some days before, around 54% or 8,831 out of 16,424 beds are occupied. The rise in COVID-19 cases has strained hospitals in the capital region.

The DOH planned to implement a more robust referral system between hospitals in order to avoid the overwhelming critical care facilities in Metro Manila. The department is also exploring other options to increase the number of healthcare personnel into the hospitals, coordinating with universities.

But, why are there so few nurses in the Philippines? The low salary could be the answer

The majority seem to have fled to other countries in order to find better working conditions. Low salary, high risk are the main reasons. The National Bureau of Local Employment, an entry-level registered nurse receives a salary of around P8,000 – P13,500 (around $162 – $275) per month.

You can imagine that the pay is very low, related to the average income of Philippines families. For many years, Filipino nurses had been leaving the country. All the attempts of fighting for higher wages and better working conditions failed.

However, at the beginning of 2020, President Rodrigo Duterte signed the Salary Standardization Law in order to increase the take-home pay of government employees, including nurses, starting January 1, 2020. But the increase of around P1,500 (around $29) is relatively insignificant. It is a spit on the hard work and the high risk that nurses, like other healthcare and emergency personnel have to face each day, especially with a global pandemic in action.

EXPLORE more on nurses in the Philippines

Hostage crisis in the Philippines – How difficult is the approach for emergency physicians?

Republic of the Philippines: Bureau of Local Employment – Nurses

Summer and high temperatures: dehydration in paramedics and first responders