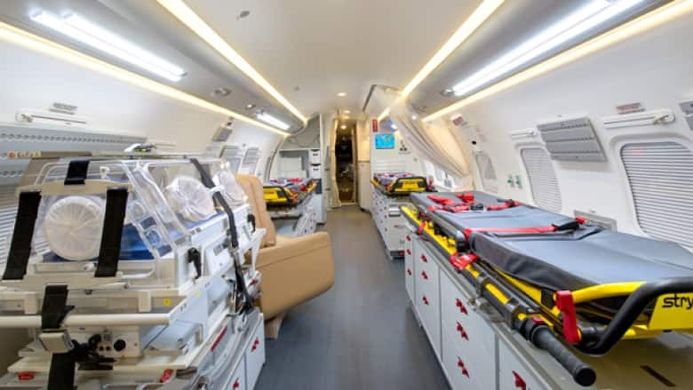 Accompanied paediatric patients transported by aircraft: yes or no? - Canadian Ministry of Health is changing its regulation

QUEBEC (CANADA) – In case of patients transportation on aircrafts, no one that is not a medical patient or pesonnel can be transported

Nor parents, friends or relatives. There is no exception. Neither in case of paediatric patient. Law is very clear with this matter. But four months ago, the Government announced it would change its stance on the practice of transporting children alone. This regards in particular Indigenous communities who live in isolates sites and where their only way of emergency transport is the aircraft.

So, by now, Challenger planes used in northern Quebec to evacuate children have an extra seat for parents or guardians. Before, the jet used for medical evacuations wasn’t set up to take passengers who weren’t medical personnel. As a result, some children made the trip to hospitals in Montreal and Quebec City unaccompanied. Parents and guardians had to take commercial flights, which were paid for by the government.

But this is a very delicate and traumatic situation for all children. In any case, also for adults, being with a person they know during hard situations is very important from a psychological point of view. In particular for children, especially those who are tourist and do not speak English or French. Nathalie Boulanger, the interim director at the Ungava Tulattavik Health Centre, says the extra space for parents has been necessary for decades.

“It’s really hard to see little children that do not speak any French or English having to be separated from their parental figure and handed over to people they absolutely don’t know.”

The policy change that led to the airplane upgrade came about after an outcry from Canadian pediatricians.

Indeed, leaving children without a known refearence is very dangerous for them and also distressful for relatives and parents, who do not know news about their condition and are obliged to take a commercial flight to reach them in hospital, maybe the day after. For example: a young girl wakes up in the Montreal Children’s Hospital, fearful and alone. She tries to escape and return home. A toddler, flown to the hospital without his parents from northern Quebec, falls from a bassinet in the emergency room.

Planes are the only way for people in Nunavik’s 14 communities to access emergency care. In 2016, a total of 146 children were transported from the Cree Territory of James Bay to the Montreal Children’s Hospital, while 146 were transported from Nunavik. Others are taken to Sainte-Justine Hospital or to hospitals in Quebec City.

It’s unclear exactly how many of those were flown without a family member, but the number is considerable, the doctors say.

So, that’s why he changed idea on the previous regulation. Two of the province’s three air ambulances are equipped with an extra seat to fit a parent. A third plane is an older model and Barrette says retrofitting it to add an extra seat could put it out of service for a year.

The government requires federal approval before going ahead with the work.

The Hell of Paramedics - Getting comfortable with uncomfortable

Happy Birthday to NHS! 70 years of dedication and compassion. Let's discover its current and future tasks!