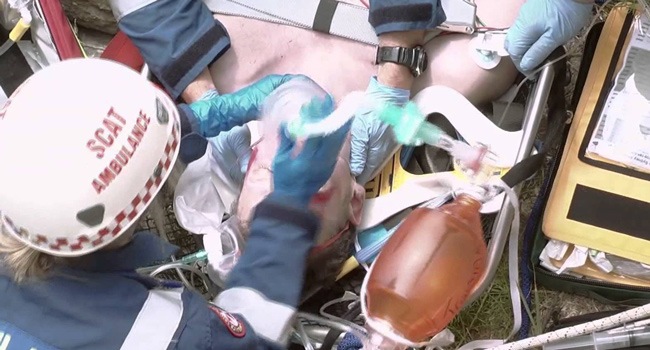 Intubation onboard the ambulance: a comparison of the conventional intubation systems - VIDEO

Comparison of the effectiveness of conventional intubation with a laryngoscope in a moving ambulance and on a static ambulance. An experimental study.

Airway management and endotracheal intubation may be required urgently when a patient deteriorates in an ambulance or aircraft during interhospital transfer or in a prehospital setting.

The experiment was conducted in an ambulance provided by the Auxiliary Medical Service in Hong Kong.

Intubation on an ambulance: methods and results

A group of 22 doctors performed endotracheal intubation on manikins with Macintosh laryngoscope in a static and moving ambulance.

In addition, they performed conventional Macintosh intubation, inverse intubation with Macintosh laryngoscope, and GlideScope intubation in a moving ambulance in both normal and simulated difficult airways.

Main outcome measures: the primary outcome was the rate of successful intubation.

En-route intubation in an ambulance by conventional Macintosh laryngoscopy is superior to inverse intubation unless the cephalad access is impossible.

GlideScope laryngoscopy appears to be associated with lower rates of eventful intubation in difficult airways and has better laryngoscopic view versus inverse intubation.

Tracheostomy During Intubation In COVID-19 Patients: A Survey On Current Clinical Practice

Tracheostomy during intubation in COVID-19 patients: a…

Intubation during CPR was associated with worse survival and…