Charles Bombardier, a Canadian designer, realized the drafts of a new ambulance prototype for 2030. New concepts of spaces and functions.

The Bombardier’s ambulance prototype has clear shapes, to make people understand the function of the vehicle. Some of the designs presented by the Canadian magazine Globe and Mail are simple remakes of already existing concepts, others are new products ready to be marketed, finally, the last ones, like this “SurvivER” are dreams far from being realized, but planned for a future of different mobility.

The concept of a new ambulance prototype

The SurvivER is a prototype for a new generation of ambulances that could be smaller, easier to drive, and simpler in functionality for first responders, compared to current models.

Background – Charles Bombardier, a world-class designer, and son of the well-known car and airplane manufacturer “Bombardier”, has shown interest in the issue, asking more paramedics on how to improve current ambulance models.

“The first problem reported – explained to Globe and Mail Charles Bombardier – was the suspension of the current ambulance models, which shake too much the patient compartment and the staff working in it.

The second problem was the problem of the sound of the sirens, which makes communication among the ambulance driver, the medical staff and the hospital difficult. To solve these first main problems I tried to create a new ambulance model. And this model reflects the nodal points from which we started our discussion.

This new ambulance type should be the same size as the current North American ambulances. However, it 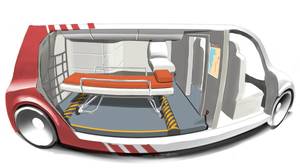 would not have a standard motor, but 4 electric motors connected to the wheels, which allow more torque and less space occupied in the front, freeing up space for the batteries.

The loading area floor should make it easier to move the stretcher. In addition, a chair for the medical staff and some retractable seats for the nurses should be implemented. On the walls of the ambulance, there will be specific spaces to install oxygen systems and storage space for other medical equipment. The side windows, potentially only on one side, would be smaller than the current spaces, to increase the available bulkheads. Sound insulating and thermal insulating materials would be inserted in the cavities to reduce siren sound interference, taking advantage of aeronautical expertise. The ceiling should also have adjustable LED lights.

Rescue and Ambulance service: Will the Tesla Autopilot…

The idea of an ambulance drone in the future of urban…

WHO IS CHARLES BOMBARDIER?