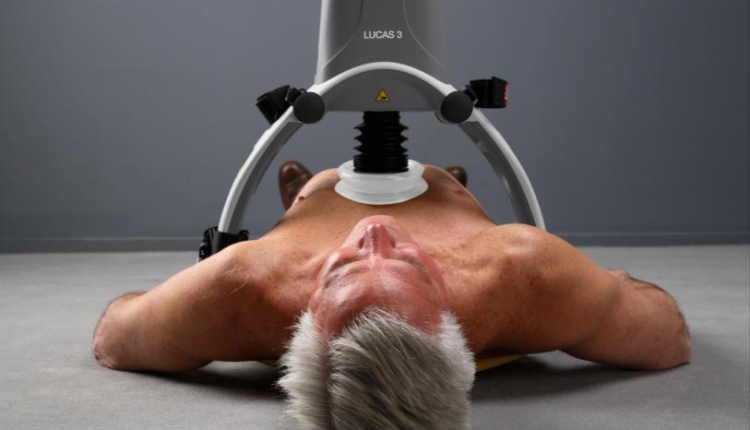 The survival and quality of life of a patient who has undergone CPA in an out-of-hospital setting is closely related to the response time and quality of cardiopulmonary resuscitation (CPR) manoeuvres that are performed.

A rescuer can perform quality maneuvers in the first 2 minutes; their effectiveness decreases over time by 4.5 .

LUCAS TM 2 is a device designed to provide high quality chest compressions, with the added benefit of releasing a rescuer.

Of course, being a machine, it is immune to stress and fatigue, ensuring optimal chest compressions throughout resuscitation.

Compared to manual CPR, this device improves several parameters, such as the exhaled CO 2 value 7 or cerebral blood flow 8,9 , without any additional damage being observed associated with its use 10 .

Its relatively light weight (7.8 kg) makes it an ideal device for treating patients who have suffered sudden death in an out-of-hospital environment.

LUCAS TM 2 is based on a piston mechanism with a suction cup located in the centre of the chest, approximately where the heel of the hand would be positioned

The device exerts the force necessary to compress the chest by approximately 5.2 cm at a rate of 102 compressions per minute and thanks to its suction cup actively decompresses the chest, generating a chest pump mechanism.

The piston receives energy from a rechargeable lithium ion battery located in its upper part, with an autonomy of approximately 45-50 minutes, which is reflected by an indicator located next to the hand control, with three leds .which switch off when the battery is low, the last one lights up orange when the battery is close to exhaustion (fig. 1).

If the Battery needs to be replaced, the device stores the parameters it was set to for 60 seconds, after which time LUCAS TM 2 will restart when the new Battery is inserted.

LUCAS TM 2 does not require any specific maintenance, although an annual service is recommended

LUCAS TM 2 has a built-in fan that is activated to cool the device when the temperature increases due to continuous operation, without the device significantly increasing its external temperature.

The use of this device is indicated in those patients who have undergone CPA where CPR manoeuvres are indicated, both for the treatment of CPA at the site where it occurred and for the transfer of the patient to hospital in potentially dangerous situations. reversible, not treatable in an outpatient setting.

In addition, it is used in the transfer to hospital of patients who have not survived an out-of-hospital CPA, and who could be potential donors in asystole, to perform chest compressions during the transfer to hospital and there are a number of catheterisation laboratories that use it to perform chest compressions during cardiac catheterisation in patients with CPA secondary to myocardial infarction.

The device is suitable for patients who have a chest with an antero-posterior diameter between 17 and 30.3 cm and a width of less than 45 cm, with no weight restrictions, which includes over 95% of the adult population and most adolescents.

It can also be used in pregnant women.

Once it has been confirmed that the patient is in CPR, CPR manoeuvres are initiated.

One of the three crew members is responsible for preparing the LUCAS TM 2 by pressing the power button when removing it from the bag.

Once prepared, the maneuvers are stopped and the yellow banana-shaped tablet is carefully placed under the patient, positioning it until the upper edge is under the armpits (Fig. 2 and 3).

The chest compressions are continued while preparing the top of the LUCAS TM .2

From the top of the device, pull the rings on the side arms to unlock the locks.

First, the hook closest to the resuscitator is hooked and, if needed, interrupt the resuscitation maneuvers again to finish the hook on the other side.

Check that both sides are firmly attached by pulling upwards once.

After switching on, the device remains in the “ADJUST” position and you use two fingers to position the suction cup at the specific compression point (fig. 4).

Once the correct positioning has been verified, it is necessary to press button 2, which fixes the piston in the desired position, and then button 3, which starts the compressions.

This button has two options depending on whether the patient is ventilated with an isolated airway (“continuous”) or not (“30:2”).

When the patient is ventilated with a resuscitation bag and Guedel’s cannula, or a supraglottic device (laryngeal mask, Fastrach ® ), LUCAS TM 2 remains in the 30:2 mode.

Every 30 compressions the device will stop for 4 seconds to allow the two ventilations.

If you decide to intubate the patient through laryngoscopy or through the Fastrach ® mask (manoeuvre to be performed without stopping compressions), then once intubated, you will push the continuous compressions button without the need to stop LUCAS TM2 and it will run for the duration of the re-launch.

Only the pause button will be pressed for rhythm analysis, either with an automated external defibrillator or with a manual defibrillator, and pulse verification, if needed, by continuing compressions immediately after the analysis, even if defibrillation is indicated.

One of the great advantages of LUCAS TM 2 is that the patient can be defibrillated without having to stop chest compressions, which improves the rate of recovery of spontaneous circulation from defibrillation11 .

If you decide to transfer the patient during the resuscitation period, with the device in operation, you should keep the patient as horizontal as possible.

LUCASTO2 has a strap that attaches to the device and goes behind the patient’s neck, which prevents the device from moving towards the abdomen when the patient is tilted by lifting the head.

However, the best option is to keep the patient in a horizontal or near-horizontal position, as displacement of the piston during the operation could injure the patient.

Once in the ambulance, the device does not need any specific fixation, as it is attached to the patient (Fig. 5), who should be held in a standard way with the stretcher’s fixation straps.

When driving the ambulance it is only necessary to follow the minimum rules of transport pathophysiology, known to all emergency medical technicians.

The use of the LUCAS TM 2 device has spread throughout the world since the launch of its first (pressurised gas-fuelled) version in 2002.

Today, Emergency Systems, Emergency Services and haemodynamics laboratories all over the world, from the United States to Qatar and all over Europe use it.

In Spain, its use has been generalised to Emergency Systems, although the Sistema d’Emergències Mèdiques de Catalunya (SEM) and SUMMA in Madrid pioneered its use, initially as a chest compressor in donation programmes. Both Mateos et al of SUMMA and Carmona et al of SEM have published in scientific journals about its use, both in asystolic donation programmes and in patients undergoing CPR 9,12-4.

Several clinical studies are currently ongoing in Spain and Europe to evaluate the effectiveness of LUCAS TM 2.

In conclusion, the LUCAS TM 2 device is a chest compressor that allows you to perform quality CPR in the different situations that can occur during cardiac arrest.

Easy to install and handle, its use has been widespread since its introduction in 2002 throughout the world with promising results.

What Is The Difference Between CPR And BLS?

Difference between AMBU balloon and breathing ball emergency: advantages and…