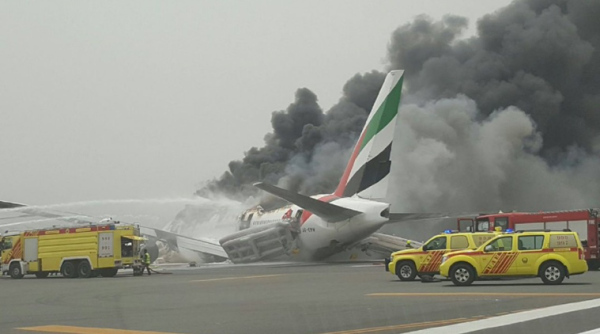 Evacuation from an airplane on fire, the video from Dubai Airport

An Emirates airline flight coming from India crash-landed at Dubai International Airport. During the evacuation procedure from the airplane, a passenger has been filmed in the situation. There was only one casualty reported. After the crash during the activity for safety evacuates people, a Dubai Firefighter dies, responding to the blaze.

The airplane accident occurred on 3rd August 2016 and was the most dangerous ever for Emirates, which needed an evacuation and that has grown at a breakneck pace over the last three decades and turned its hometown of Dubai into a major long-haul international air hub. It was the second major air disaster for a Dubai government-backed airline in less than five months.

Speaking to reporters in Dubai, Emirates Group CEO and chairman Ahmed bin Saeed Al Maktoum said 10 people were hospitalized after the incident, but stressed that all passengers were safely evacuated before the plane was engulfed in a fireball. He said one firefighter died trying to put out the fire.

Emirates said the accident happened around 12:45 p.m. local time as Flight EK521 was arriving from the southern Indian city of Thiruvananthapuram. It confirmed that “all passengers and crew are accounted for and safe,” but gave no details of what went wrong.

“We do not have … all the information. Thankfully there (were) no fatalities among our passengers and crew,” Sheikh Ahmed bin Saeed Al-Maktoum, the airline’s chairman and CEO, said in a video statement. “Our thoughts are with everyone involved.”

There were 275 passengers and crew on board and the video show you how difficult is realize an evac procedure on a plane on fire.

Emergency in Airports - Panic and Evacuation: how to manage both?

COVID19 in France, even the firefighters on the ambulances: the case…

Canadian Syncope Risk Score - In case of syncope, patients are really in danger or not?

UK - How much disruption could be in Fire-Safety Industry after Brexit?

Defibrillators, ventilators, mechanical CPR: what surprises will we find in the Zoll…