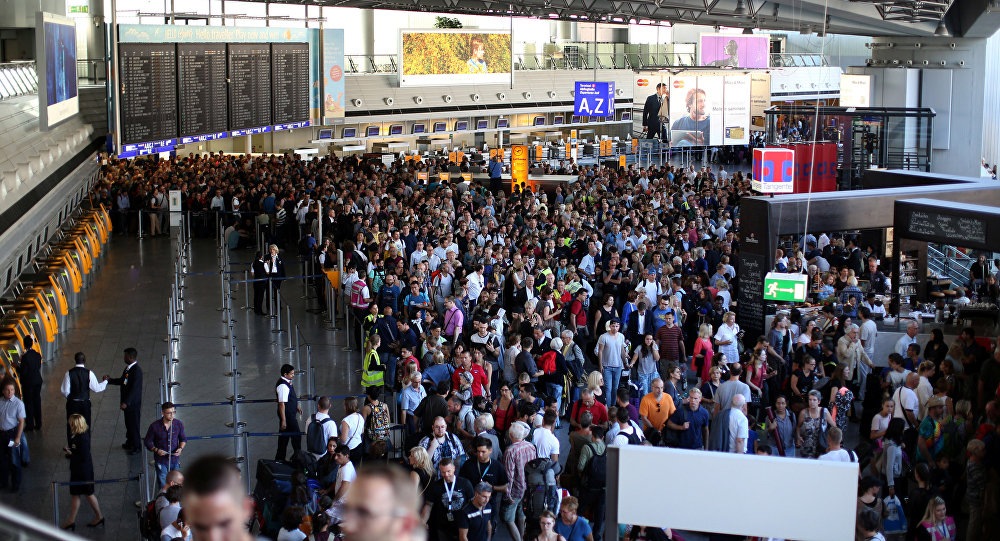 Emergency in Airports - Panic and Evacuation: how to manage both?

Emergency management in airports is a very complex matter. First responders have to follow specific guidelines. Here we are again with another chapter on safety and evacuation from airports.

Joseph Goodlip, Station Fire Officer of the Fire & Rescue Services at MIA (Malta International Airport) was one of the speakers at the Emergency Management for Airports Summit 2017 in London and he explained the procedures to take in case of evacuation and, in particular, how to hold panic reactions. Here is our interview.

In case of emergency, what are the first procedures to take inside the terminal building?

“The first step in an emergency situation is to activate the Emergency Terminal Evacuation Plan. This triggers the emergency evacuation team, and in particular Evacuation Marshals, who play a key role in this process, into full alert to follow emergency procedures and kick-start the evacuation process. This process involves moving all able-bodied persons, passengers and staff along the emergency routes and exits; away from danger zones to designated safe areas called ‘Fire Assembly Points’.

Persons with reduced mobility (PRMs), including people who are not able to leave the building on their own or use the emergency stairs for a reason other than reduced mobility, can be assisted and transported to Refuge Points/Areas serving as temporary safe areas. Evacuation Marshals would guide people to these locations up until the time when the first response rescue team arrives, and see that they are evacuated to safety. It is very important that these locations are fitted with a telephone line or another form of communication, in order to inform the Emergency Operation Centre to send out help as soon as possible.”

“PRMs (People with Reduced Mobility) should be constantly assisted, from the point they enter the terminal until when they reach the aircraft. If something should go wrong and the evacuation alarm is activated, PRMs are to be transported to Refuge Points. “

“Response teams have to be constantly trained in this field of rescue, in the use of advanced rescue devices – such as evacuation, mechanical or transport chairs – to be able to operate safely,  and in the use of emergency resources (emergency equipment) in general.”

Airport evacuation and how to hold panic. What about refuge points and refuge areas?

“A Refuge Area can be an enclosure such as a compartment, lobby, corridor or stairway that can provide protection from fire and smoke. Additionally, once accessed, such an area will lead to a place of safety via an emergency exit.”

“Refuge Points can be areas normally located near emergency staircases or otherwise, and can serve for the momentaneous transition of people, who are unable to self-evacuate from the incident area to a safe area. Refuge Points that are in close proximity to a particular incident should be avoided, and PRMs should be transported to an alternative emergency route and Refuge Point.”

“Refuge Points are normally found above Level 0, on the upper levels of the terminal building. These points can also be found along emergency routes on roofs in the open air leading to emergency stairs. Should it prove to be difficult for people to go down the emergency stairs, turntable ladders and hydraulic platforms can be availed of to carry out rescue from roofs. In extreme situations, especially in the case of an injury, a person can be lowered with the use of bucket stretchers. As a last resort, and if risk is imminent, but no fire or smoke is near the Refuge Area, helicopters can also be deployed, if the situation permits this.”

Airport evacuation and how to hold panic – It is common that in emergency scenarios, people tend to be frightened. How do you manage panic reactions?

“Panic is generally common and difficult to control in an emergency scenario. However, a situation can be rendered more controllable, if one follows the appropriate norms and procedures. Training in relation to emergency evacuation procedures should be given to all staff and stakeholders, as it is of paramount importance that everybody knows what to do in case of an adverse situation.

Such training is one of the key factors to better manage situations that trigger panic reactions. In particular, it is very important that airport staff knows what the procedures are and where to go, in case of an evacuation from the building.”

“In these kind of scenarios it is vital to have an evacuation team at the ready, which brings together representatives of all airport stakeholders. A competent team giving guidance and exhibiting knowledge of how the system works, can help abate the panic that may arise among airport visitors and passengers in the case of an emergency.”

“Evacuation Marshals’ main role is specifically to direct and guide passengers to a safe area. Having a team of evacuation marshals who can speak a number of different languages is very important, as this facilitates communication with the affected passengers, especially the delivery of instructions and appeals to keep calm.

Evacuation marshals can be recognised from highlighted vests with the words ‘Evacuation Marshal’ written on them. Indeed, people who are in a state of confusion and panic tend to look out for a ‘highlighted figure’ or a figure of authority that offers reassurance. Once passengers spot such figures, they tend to make their way towards them out of their own accord, in order to receive instructions as to what they should do next or directions to the right emergency routes and exits.

evacuation and how to hold panic – What about chairs for evacuation operations? And what about trainings?

In the case of an emergency, these persons would assist people with reduced mobility and use evacuation chairs to evacuate them. Evacuation chairs should be tested in all their functions and at specific intervals in order to ascertain that they are up to standard. All fire staff should be given both theoretical and practical training in the use these devices, and refresher training should be provided after a certain period of time elapses.”

Airport evacuation and how to hold panic – In case of evacuation from aircrafts, what are the procedures?

“The procedures followed in case of an emergency on board an aircraft depend on the severity of the incident; namely the type of emergency and the injuries sustained. If the aircraft is still on the airstrip and intact, with passengers who cannot self-evacuate on board, emergency equipment may be used, provided that there is enough time and no imminent risk present. However, inside an aircraft space is very restricted, so normally the use of evacuation chairs or other equipment to effect rescue would not be possible.

Spinal boards and rescue extrication devices are used when fire risk is eliminated inside the aircraft.  If the use of equipment is likely to increase the risk posed, manual handling and improvised rescue techniques can be resorted to. An example of an improvised rescue technique are human chairs (2, 3 or 4-handed seat), where two people carry a third person who would not be able to walk for some one reason or another. In the case of a major emergency, human resources would be an important factor in the rescue process of a large number of incapacitated passengers inside an aircraft using manual handling.”

Emergency in Airports – How is an Airport building Evacuation carried on?

The Cyber Security for Airports

Airport evacuation – Evacuation from an airplane on fire, the video from Dubai Airport

Harsh Earthquake in Ischia Isle in the everning