Bomberos in Argentina: history of the brigade of the Voluntarios de La Boca, Buenos Aires

Bomberos in Argentina: The Boca Volunteer Fire Brigade was born thanks to a beautiful story of immigration and collaboration for the good of the community of the capital of Argentina

A decree dated December 8, 1860, signed by Governor Ocampo and signed by Sarmiento as minister, is the first official provision regarding the formation of a fire brigade, the Bomberos of Argentina

Police chief Rafael Trelles had to provide a hand pump and all the supplies needed and make it available to the department of Barracas al Norte and then “organize a suitable fire brigade, so that, by training them properly they could come and extinguish the wildfires in case of emergency”.

Meanwhile, fires were being fought primitively with volunteer neighbors, without any organization or experience.

Although the municipal council of the City of Buenos Aires explicitly requested a professional fire-fighting services, the government continued to ignore the need.

On January 2 1870, thirty officers from the police station of the Chief Enrique O’Gorman were tranfered to the task of Fire Brigade, thus creating the first Department of the capital.

A city that at the time had its western limit in the Castro Barros-Medrano streets.

An area too large for such a small number of agents.

In 1876, President Nicolás Avellaneda passed the first nationwide law on immigration and colonization. This started a great increase in the influx of immigrants, transforming Argentina’s social life.

La Boca del Riachuelo, which was then a suburb, began to receive an incessant flow of immigrants, mostly Italians of humble origins, seeking to get a better life in this new homeland.

The neighborhood grew in population and with new houses mostly built with the remains of the shipyards in the area, wood, sheets, paintings.

The roads were mostly made of dirt and access was very difficult on rainy days, so rescue operations by the Fire Brigade were almost impossible.

In December 1883, a voracious fire broke out in Corti y Rivas, a renowned company located near the river bank on what is now Almirante Brown Avenue.

The wildfire quickly started to grow and exiting from the doors and windows of the shop with flames that spread rapidly and threatened to spread to neighboring buildings as well.

A 20-year-old man emerged from the audience watching, shouting: “Come on, let’s put out the fire together!”.

A chain quickly formed in which men and women worked together to carry buckets of water, which were filled into the river, to try to extinguish the fire.

Bomberos in Argentina: that young man named Oreste Liberti had become the makeshift leader of that group of volunteer firefighters

Motivated by this event, at the beginning of 1884, Don Tomás Liberti together with his sons Oreste Liberti, Attilio Liberti and a group of well-known neighbors gathered at his house, decided to organize themselves and, finding the initiative feasible, they posted around the city an invitation written in Italian:

“Fellow citizens! A spark could start a ravenous fire and burn our log homes to ashes.

We need a fire brigade company to save our assets and our families in the moment of danger.

To this purpose, we invite you to the meeting which will take place on Sunday at 3 pm in the Iris Hall.

Fellow citizens! The idea started by a few needs all of you and with your valid support we will have the pride of having set up a useful and philanthropic Association.

Sunday, therefore, at the Iris Hall; no one should miss the call”.

On Sunday 2 June 1884, Liberti explained the aims and convenience of setting up a voluntary fire brigade.

After a brief debate, the foundations for the formation of the “Italian Association of Volunteer Firefighters of La Boca” were approved.

The first managing commission was defined with various illustrious citizens whose elected president was Tomas Liberti.

José María Buyo, a great propagandist for the voluntary fire brigade organizations and manager of the fire insurance company “La Mutua” also shared his knowledge that day, and proposed a first regulation of the fire brigade company that he had written and printed shortly before. He was recognized as the “First Worthy Member”.

That June 2 was not an ordinary day, as it also commemorated a new anniversary of the death of the Hero of the two worlds and knight of humanity Giuseppe Garibaldi.

The origin of the Bomberos in Argentina: the offices were installed in a building on Necochea street, between Lamadrid and Pedro de Mendoza

In front of it was placed a sign with the inscription “Will is power”, the motto of the founder of the institution.

On August 2nd of the same year, the first public prosecutor of the nation approved the statute of the company, recognizing the body as a public service body and giving it the corresponding legal personality.

As the corporation gradually grew, the Dante Alighieri Association made its first fundraising for the benefit of the department, which at the time already had 25 volunteer firefighters.

With the funds raised, they bought the first fire-fighting vehicle, a hand pump which they named after their motto.

The firefighters began to receive adequate training and a few months later the action also arrived. A voracious fire broke out in a large candle factory in Barracas del Sud (Avellaneda).

With just a hand pump and a lot of enthusiasm, La Boca’s volunteer firefighters were able to put out the fire, thus having their baptism of fire.

The history of the Boca Fire Brigade continued over the years through various government attempts to eliminate it and even a revolution, always winning those challenges thanks to the support of the community they have always sworn to protect.

A beautiful story of how an immigrant population in this land went their own way to create an efficient and respected volunteer department throughout South America.

“We all know how Spaniards and Italians have competed throughout the Republic to found philanthropic communities and entities at the service of society.

This is the spirit that has presided over years of progress in Argentina”, said President Raúl Alfonsín from the balcony of the Volunteer Fire Brigade building for the 100th anniversary celebrations held in 1984. 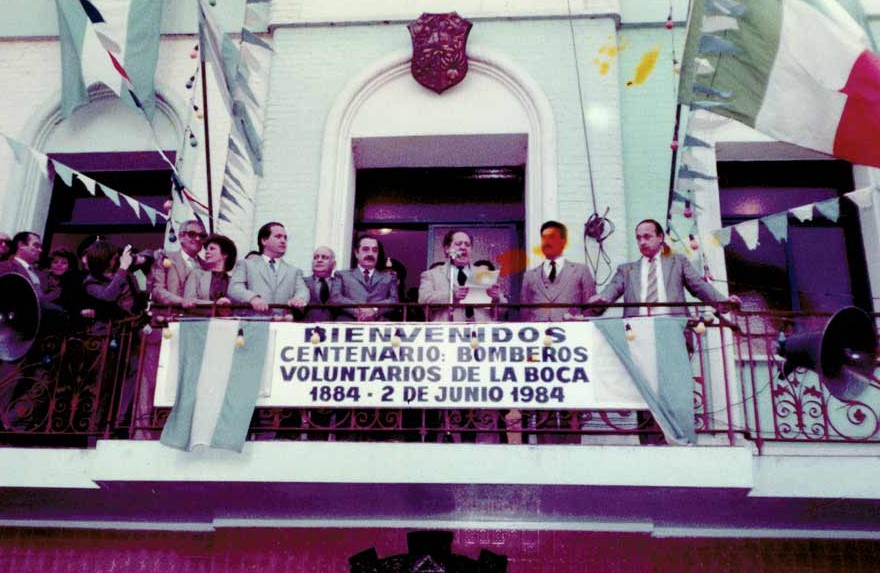 The president of the fire brigade Carlos Bello received him again on 11 March 1985, when Alfonsín visited the neighborhood with the then President of the Italian Republic Sandro Pertini and surprisingly, breaking every protocol, they crossed the Riachuelo river together by boat, alarming and confusing the presidential custody.

The German Museum Of Fire Fighting Of Fulda