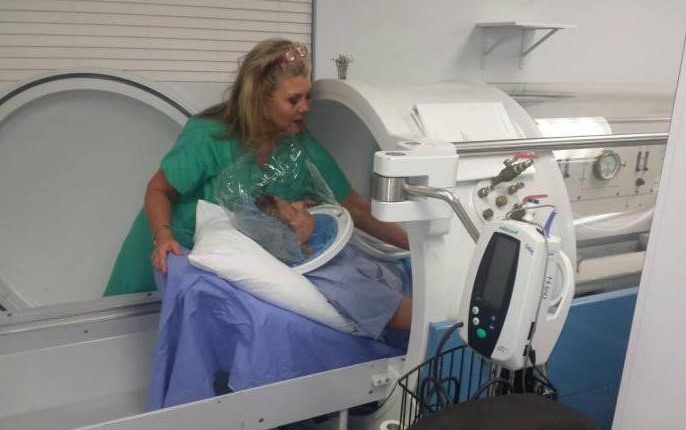 Symptoms typically include pain, neurological symptoms or both.

Severe cases can be fatal.

The definitive treatment is recompression therapy.

Henry’s law states that the amount of gas dissolved in a liquid is directly proportional to the partial pressure of the gas in equilibrium with the liquid.

During ascent, when the external pressure decreases, bubbles (mainly N2) may form.

Bubbles of free gas can form in any tissue and cause local symptoms or can be carried by blood to distant organs (arterial gas embolism).

Bubbles cause symptoms by

Decompression sickness occurs in about 2-4 dives/10 000 among recreational divers.

The incidence is higher among commercial divers, who are exposed to greater depths and longer dive times.

All of the following include risk factors:

Since excess nitrogen remains dissolved in the tissues for at least 12 h after each dive, repeated dives in the same day are more likely to cause decompression sickness.

Decompression sickness can also develop when the pressure drops below atmospheric pressure (e.g., with subsequent exposure to high altitudes).

In general, two types of decompression sickness are distinguished:

Type 1: involves joints, skin and lymphatic vessels and is typically milder and not life-threatening

The term The bends refers to local joint or muscle pain due to decompression sickness, but is often used as a synonym for any component of the syndrome.

Severe symptoms may occur within minutes of emergence, but in most patients symptoms begin gradually, sometimes with prodromes of malaise, exhaustion, lack of appetite and headache.

Symptoms occur within 1 h of emergence in about 50% of patients and within 6 h in 90% of cases.

Rarely, symptoms may occur 24-48 h after surfacing, particularly with exposure to high altitudes after diving (such as air travel).

Type I decompression sickness usually causes progressively worsening pain in joints (usually elbows and shoulders) and muscles; the pain usually does not intensify during movement and is described as ‘deep’ and ‘uncomfortable’.

Other manifestations include lymphoedema, tingling, itching and skin rash.

It typically manifests as paresis, paresthesias and tingling, dysuria and loss of voluntary control of bowel or bladder sphincters.

Headache and fatigue may be present, but are not specific complaints.

Lipotimia, tinnitus and hearing loss may occur if the inner ear is affected.

Significant gas embolisation of the pulmonary vascular tree can lead to rapid circulatory collapse and death.

Dysbaric osteonecrosis is a late complication of decompression sickness, and often occurs without any previous symptoms.

It is an insidious form of osteonecrosis caused by prolonged or very close exposures to increased pressure (typically in people working in compressed air and in professional rather than recreational divers).

Deterioration of the articular surfaces of the shoulder and hip can result in chronic pain and disability due to secondary osteoarthritis.

The diagnosis is clinical.

Arterial gas embolism may have a similar manifestation.

However, immediate treatment for both is similar.

In the case of aseptic osteonecrosis, skeletal X-ray shows joint degeneration that cannot be distinguished from that caused by other joint diseases; MRI is usually diagnostic.

To restore lost intravascular volume, oral resuscitation fluid (or plain water) is indicated for patients under observation with mild manifestations.

Isotonic EV fluids without glucose are indicated for those with severe manifestations.

Recompression therapy is indicated for all patients; those with symptoms limited to pruritus, flaky skin and fatigue, which may be treatable with oxygen alone, are exempted; patients should be observed for possible worsening of symptoms.

Patients with more severe symptoms are transported to a suitable facility for recompression.

As the time interval before treatment and the severity of the injury are important determinants of prognosis, transport should not be delayed for non-essential procedures.

If air transport is necessary, cabin pressurisation of 1 atmosphere is highly recommended.

Commercial aircraft, despite being pressurised, usually have cabin pressure of up to an equivalent of 2438 m at a normal cruising altitude, which can exacerbate symptoms.

Flying in commercial aircraft immediately after a dive may exacerbate symptoms.

Many divers wear a handheld dive computer that continuously records depth and time spent at each depth and compiles a decompression profile.

In addition to following the published profiles and dive computer guidelines, many divers perform a safety stop for a few minutes at a depth of about 4.6 m from the surface.

However, cases may occur even after proper diving within the no-stop dive limits, or conversely, the incidence of decompression sickness does not decrease despite the widespread use of dive computers (although fewer severe cases occur).

Neurological rehabilitation: what it is and what its objectives are