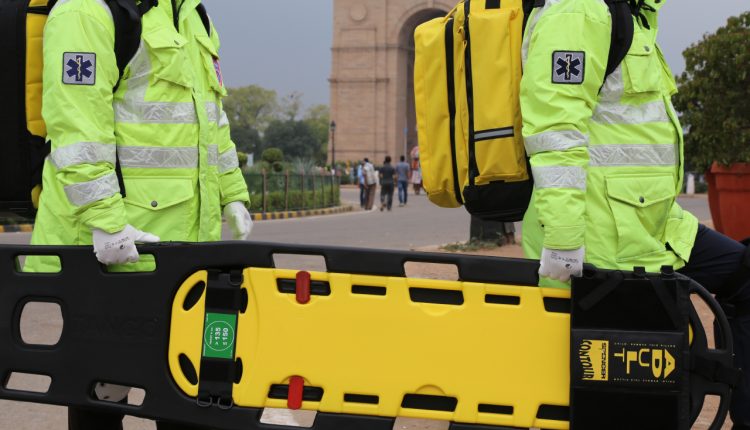 Spinal immobilisation, one of the techniques the rescuer must master

Spinal immobilisation is one of the great skills that the emergency medical technician must master. For many years now, all victims who had suffered trauma have been immobilised and, because of the type of accident, according to the technician’s criteria, it was necessary to immobilise the spinal cord

These were the years when it was logical and intuitive to think that any victim of an accident of sufficient magnitude, such as a fall from height, a car accident or a similar event, should be immobilised because there was a risk of spinal cord injury, which we should avoid at all costs.

This included immobilising victims who did not suffer any signs of trauma of any kind, not even neck pain.

The effects of excessive spinal immobilisation:

This caused hospitals to fill up with victims walking through the door in a neck brace, immobilised on a board or vacuum mattress, which brought the whole system crashing down.

Both the Nexus and the Canadian protocol sought to exclude patients who did not meet the criteria for diagnostic radiology testing because their clinical diagnosis did not have a well-founded suspicion of spinal cord or spinal cord injury.

These criteria quickly went from being hospital criteria, almost exclusively for radiology, to being used in out-of-hospital medicine to determine which patients should be immobilised in the street and which should not.

There are also other specific criteria for out-of-hospital emergencies, such as the PHTLS criteria, all based on abundant scientific criteria based on statistical research or human experimentation.

A classic example is the experiment in which a group of volunteer subjects were immobilised for long periods of time, between half an hour and two hours, and then asked about possible complications arising from this prolonged immobilisation.

It was then discovered that immobilising a patient generated anxiety and pain in the neck and back that could last for hours, and in some cases could cause skin lesions at the points of support with the board.

Therefore, numerous evidence-based guidelines appeared, such as the NICE 2 guidelines or similar ones.

The following year an interesting article appeared in the Scandinavian Journal of Trauma, Resuscitation and Emergency Medicine entitled “New Clinical Guidelines on Spinal Motion Restriction. The adult trauma patient: consensus and evidence base 4” , published on 19 August 2019.

Spinal column immobilisation using a spine board: objectives, indications and…

Defibrillator: what it is, how it works, price, voltage, manual and external