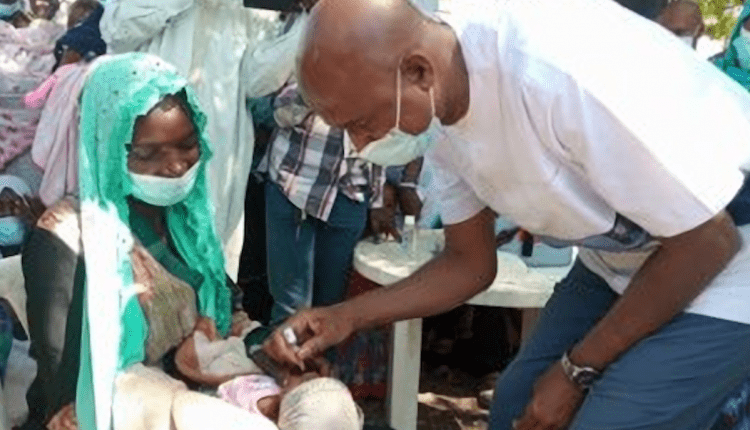 In Chad over 3.3 million children vaccinated in large-scale polio campaign

Vaccination against polio in Chad. More than 3.3 million children have been vaccinated against polio in Chad in a just-concluded immunization drive – one of the largest of its kind in the African region this year as campaigns that were halted due to the COVID-19 pandemic resume.

Chad, the fight against polio

While Africa was declared free of the wild poliovirus in August 2020, another form of polio continues to infect children: circulating vaccine-derived poliovirus, or cVDPV.

This type of polio is rare and can only occur in areas where not enough children are immunized, which means that the only way to stop their spread is through immunizations.

The current outbreak in Chad was first detected in February 2020, but immunizations were halted due to COVID-19, and the virus spread to 36 districts across the country, paralyzing more than 80 children and even leading to cases in neighbouring Sudan and the Central African Republic

“Viruses do not respect national borders,” said Dr Ndoutabé Modjirom, head of the polio Rapid Response Team at the World Health Organization (WHO) African Region. “Given Chad’s central geographic location and mobile populations, it was important to plan a large-scale campaign that targeted key populations and high-risk areas throughout the country.”

The campaign consisted of two vaccination rounds targeting children in 91 districts located in 16 of Chad’s 23 provinces.

The first round was between 13 and 15 November and the second from 27 to 29 November.

Mass vaccination campaigns against Polio and COVID-19 restrictions in Chad

After mass polio vaccination campaigns were stopped across Africa due to COVID-19 restrictions, they resumed in July 2020.

Altogether, more than 40 million children in 16 countries have now been vaccinated.

The response to date in the region overall, and in Chad in particular, demonstrates the commitment by Global Polio Eradication Initiative partners and the countries to stop the virus in the most challenging areas in the context of the COVID-19 pandemic.

“The number of children reached since polio campaigns have resumed is extremely encouraging,” said Dr Matshidiso Moeti, WHO Regional Director for Africa.

“This large-scale campaign in Chad during COVID-19 is a reflection of the region’s commitment and ability to face multiple difficult health challenges and protect the health of all children.”

During the pause in mass polio vaccinations due to COVID-19, Chad’s team of national and international polio experts worked with the Rapid Response Team to track the virus, conduct a risk assessment, and plan an outbreak response campaign to take place as soon as it was safe to do so, taking into account the timelines in the outbreak response standards of practice.

Consultations were also held with the national COVID-19 task force to ensure that best practices in infection prevention and control would be followed.

The commitment and efforts of the Ministry of Health and of other key national and regional health leaders and partners, including UNICEF, were instrumental in launching the campaign.

“With increased immunizations and the continued commitment of health leaders and partners, we are confident that we will soon see the end of this outbreak and the end of all forms of polio in Africa,” said Dr Jean Bosco Ndihokubwayo, WHO representative for Chad.

400,000 Vaccinated Children In Somalia: The WHO Aims To Vaccinate Against Polio And Measles In Banadir

COVID-19 drugs, the trial on Remdesivir continues on the International Space Station