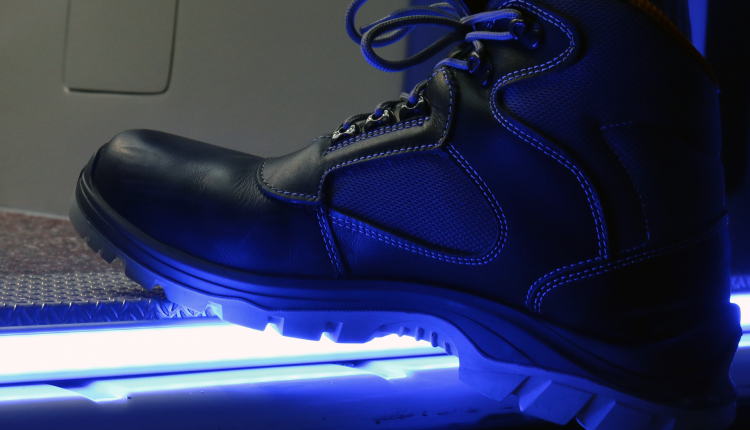 Occupational (and non-occupational) diseases: shock waves for the treatment of plantar fasciitis

Enthesopathy or plantar fasciitis, also known as heelonitis, is a very common type of inflammation, the onset of which can be caused by a variety of factors, including certain habits (such as wearing inappropriate footwear) and sporting activities

Plantar fasciitis (Heelitis) and its symptoms

Plantar fasciitis, or more properly plantar fascia enthesopathy, is an inflammation located on the lower portion of the heel, which typically manifests itself with a stinging pain, right at the point where the plantar fascia, the strong fibrous structure that supports the plantar arch, is inserted on the bone, on the side of the bearing surface.

In some cases, the inflammation may also involve the central part of the plantar fascia, towards the arch of the foot, which is called plantar fasciopathy.

Typically, the pain caused by plantar fasciitis is most intense in the morning or during nocturnal awakenings, when the foot is put down to get out of bed, and can last from a few minutes to longer, depending on the degree of inflammation.

Generally, in the early stages of the disease, the pain subsides with walking and movement, although it returns to be felt acutely when getting up after sitting for a long time, as well as in the evening at the end of daily activities, especially if these have forced the patient to remain upright for a long time and to walk for long distances.

In the more advanced stages of fasciitis, the pain may be almost continuous and often does not let up throughout the day, or even cause discomfort at night or when resting.

PROTECTION FOR HEALTHCARE PROFESSIONALS? VISIT THE BIOCAREMEDIC BOOTH AT EMERGENCY EXPO AND FIND OUT HOW TO IMPROVE THE QUALITY OF YOUR WORK

The causes of heelonitis (Plantar fasciitis)

Several factors can contribute to the onset of heelonitis, one of which is undoubtedly a certain individual predisposition, related to foot conformations such as the “flat foot” (i.e. pronated) and the hollow foot (characterised by the accentuation of the plantar arch).

It is more frequent in middle-aged people, in those suffering from obesity or other endocrine-metabolic disorders, and in pregnant women, as well as in patients suffering from hyperuricemia or immune-reumatological pathologies.

In particular, excess body weight can play a decisive role in the onset of symptoms, especially if the increase is sudden.

There are also certain habits that can increase the likelihood of developing heelonitis and which it is therefore important to investigate in the patient’s anamnesis for a correct diagnostic and therapeutic approach.

In fact, any therapy will be less effective if the risk factors and triggers are not eliminated or at least mitigated.

A very important factor to consider in the first instance is the type of footwear used by the patient: often, in fact, people wear shoes which are not suitable for the conformation of their feet, either because they have no heel (such as certain types of “ballerinas”), or with an inappropriate sole (such as “flip-flops” or other types of slippers worn during the summer season).

It should be borne in mind that, in some cases, the inadequacy of the footwear is simply linked to its use for too long.

In addition, as a result of wearing unsuitable sports footwear, incorrect athletic gestures, or functional overload, certain types of professional activity can cause abnormal traction at the level of the plantar fascia, or even continuous microtraumatism (for example when jumping and landing) can frequently be responsible for the onset of plantar fasciitis.

Curiously, heelitis often manifests itself in a typical seasonal pattern, with a peak incidence in the summer months, a season in which it is common to wear footwear with less reinforced soles.

THE BEST EQUIPMENT FOR RESCUE PROFESSIONALS? DISCOVER UNIFORMS, HELMETS AND SAFETY SHOES AT THE RESCUE PROTECH BOOTH AT EMERGENCY EXPO

About plantar fasciitis: How can you prevent heelonitis?

Inflammation of the heel region can be prevented by eliminating or correcting the negative factors that cause it.

As far as footwear in particular is concerned, if you want to avoid suffering from heelonitis, it is best to choose shoes that are suitable for the type of activity you practise, and replace them when the first signs of wear or structural failure appear.

Professional footwear should preferably be chosen with the advice of an expert; in everyday activity, on the other hand, footwear with a completely flat or particularly thin and soft sole should be avoided as much as possible.

On the other hand, heels that are too high should also be avoided, as they can cause pathologies of the front part of the foot and contribute to retraction or ‘shortening’ of the Achilles tendon.

A heel of a few centimetres is certainly ideal from a biomechanical point of view, and is also helpful in providing relief if plantar fasciitis has already appeared.

In addition to leading a healthy lifestyle, which allows us to control our body weight and keep any existing pathologies under control, it is of fundamental importance to recognise if there are any deformities in the foot (e.g. flatness or cavus), and, if possible, to correct them appropriately with custom-made orthotics (custom-made insoles made to the foot’s shape).

The importance of shoe choice

Preventing heel pain is mainly a matter of choosing the right shoes to wear.

Those who do not suffer from other foot disorders should wear comfortable but supportive shoes, i.e. footwear that offers support to the foot without being constricting.

As already mentioned, heels can help women, but only if they are only a few centimetres high and have a good support base (i.e. not a “stiletto”).

This is true for shoes worn during normal daily activities; sports activities certainly require greater attention in the choice of shoes and the height of the sole in correspondence with the base of the heel.

It is important to emphasise that, still on the subject of sporting activity, particular attention must always be paid (both for competitive and, even more so, for recreational-amateur activities) to the type, intensity and duration of training, as well as the execution of the athletic gesture.

In addition, for the prevention of plantar fasciitis, it is advisable for susceptible individuals to devote a few minutes of each day to stretching and proprioceptive training of the foot and ankle.

What to do in case of plantar fasciitis?

The therapeutic approach is in the first instance conservative, since it is preferred to limit surgery only to those cases in which the patient has not responded in any way to all other therapies.

Silicone heel cushions with a central relieving part are certainly to be considered as a “first aid” to be implemented while waiting to consult the doctor.

In the current state of knowledge, an important treatment strategy for this type of inflammation is undoubtedly shockwave therapy, the clinical validity of which is supported by a large number of scientific papers that demonstrate its effectiveness.

It is safe, non-invasive, outpatient, repeatable and virtually free of side effects.

Moreover, when performed with suitable equipment and by skilled hands, it is well tolerated by the patient, who does not have to fear pain during the session.

The therapy consists of micro-mechanical stimulation, which, by gently massaging the tissues, stimulates the cells to produce a series of growth factors and other biochemical mediators that serve to counteract inflammation and stimulate tissue healing.

It should be pointed out that shockwaves do not in any way cause tissue damage or break up calcifications and bone spurs, but have a real modulating effect on inflammation.

It follows that, for all heelitis associated with the presence of a possible bone spur (in medical terms an osteophyte), the aim is not to break or eliminate the spur, but to resolve the inflammation at that site, which is itself responsible for the pain.

The treatment cycle consists of 3 therapy sessions, on average weekly.

It is important to remind the patient that the efficacy of shock waves is generally not immediate, so it is necessary to wait a few weeks (but sometimes more than 2 months) to assess the beneficial effects and that, between therapy sessions, there may be a temporary flare-up of pain.

While in most cases plantar fasciitis can be resolved with shockwave therapy, there are some cases that are refractory to healing, but these are usually chronic cases of patients who have already undergone various types of therapy.

In such cases, local infiltrative therapy with autologous growth factors (i.e. extracted from the patient’s own blood), such as platelet concentrate known as PRP, or other preparations, can be considered as an indication to turn off inflammation and stimulate tissue healing, although not with a biophysical method such as shock waves, but with a biochemical strategy.

It is also important to remember that shock wave treatment is not only repeatable in case of partial benefit, but above all does not preclude the possibility of applying other regenerative medicine strategies such as the infiltrative therapy mentioned above.

The importance of consulting a specialist for a correct diagnosis

It must be stressed that not all heel pain can be attributed to plantar fasciitis, although it is certainly one of the most frequent pathologies.

For this reason, it is necessary in the first instance to formulate a correct diagnosis, which, after the clinical examination, includes the standard X-ray examination, which may be combined with an in-depth examination with ultrasound, or even magnetic resonance imaging (MRI) in the presence of specific diagnostic suspicion.

The success of the therapy, in fact, depends in the first instance on the correct diagnostic framework.

Ambulance Uniform In Europe. Wear And Compare Test By Rescuers

Stabbing, Assault And Aggression: Paramedics Are More In Danger Compared To Firefighters

(Also) Occupational Diseases: All Causes And Remedies Of Plantar Fasciitis

Mesotherapy: what is it and how is it carried out?

CAR-T: an innovative therapy for lymphomas