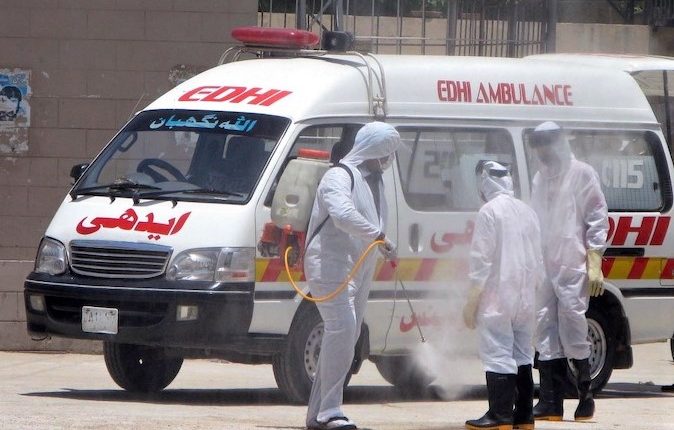 Prompt assessment and treatment can markedly improve survival outcomes in the patient (1-5).

This difference could be attributed to the poor availability and efficiency of facilities like ambulance services, paramedical staff and triage (7).

Ambulance use in Pakistan, lack of EMS guidelines

In Pakistan, for many years there was no proper EMS protocol and guidelines.

Majority of the services were rendered by philanthropic organization called Edhi Foundation (EF) which received recognition in Guinness book of record for setting up the largest volunteer ambulance network services in the whole world.

According to the statistics of March 2016, more than 1,800 private ambulance of EF have been stationed across different urban and rural areas of Pakistan including the interurban roads (8).

The main purpose of this service was to reach the site of incident and immediately transport the patients to the nearby hospital.

In addition to this, these ambulances were also used to transport patients between different healthcare facilities or to transfer corpse from hospital to their abode as a public service (9, 10).

Although EF has and continues to serve the country by creating an efficient and easy access for the injured patients to reach the hospital, it lacked trained personnel and paramedic care.

Pakistan, the ambulance in the Rescue 1122 system

In 2004, government-funded Pre-hospital care system, named Rescue 1122 was established in the province of Punjab.

Its services were first offered in Lahore but gradually expanded in all major cities of the Punjab province (9).

Their ambulances are comprised of fleeting tracking and wireless communication devices to monitor and enhance the efficiency of the system ensuring an average response time of seven minutes with paramedical staff trained with the necessary skills to check patient’s vital, do physical examination and assessment. It also included providing patient with Basic Life support, CPR, management of hemorrhage, shock, burns, fractures, spinal cord or other injuries.

Rescue 1122 is also contributing in training Fire and water rescuers along with Disaster and emergency responders.

So far, their Emergency Ambulance Services has rescued millions of victims of acute medical emergencies, disasters and specially road traffic accident because of the hesitation of people to help them due to medico-legal reasons (10).

Although initiatives taken by Rescue 1122 and few other philanthropic organizations have improved the status of pre-hospital care in many cities of Punjab, underdeveloped provinces of Pakistan still lack proper system of EMS.

However, Government of Pakistan along with these organizations are likely to come up with suitable reforms in near future that could be applicable throughout the Pakistan.

London under COVID-19 attack, NHS sets up two ambulance buses: an Italian idea in the UK

Down syndrome and COVID-19, research at Yale University